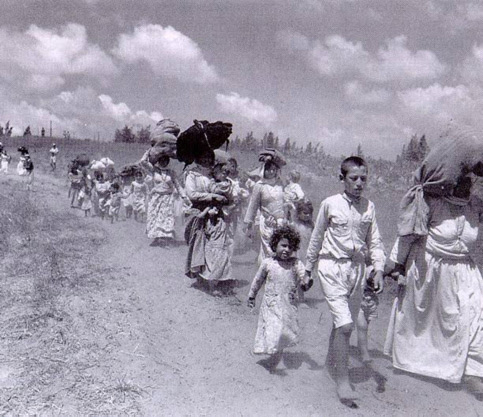 The ethnic cleansing of Palestine began in 1948. The nakba - or "catastrophe" - which overwhelmed the Palestinian people began with the Jewish-Arab war that gave birth to the State of Israel and has never really ceased.
FIVE daughters of Palestine fell asleep – never to wake. Their distraught father, standing atop the pile of rubble that was his home demands: "Why did they have to die? They weren’t making rockets. They were studying."
An appalled and angry world echoes his question: "Why did they have to die?"
In Ashkelon, a little town within easy range of Hamas’s rockets, an elderly Israeli citizen didn’t make it to the family shelter in time. His daughters also weep. The children of his children ask: "Where is Grandpa?"
The leaders of Israel make reply with F-16 warplanes and battle tanks.
And so, once again, the twin volcanoes of Palestinian and Israeli rage pour out their molten tributes of death and suffering. Terrifying in their ferocity, these eruptions spew forth the hot lava of accusation and counter-accusation. Within hours, grim stories of tragedy and loss congeal and harden into yet another layer of impenetrable hate.
"But they are not ‘twin’ volcanoes!", object the partisans of Palestine. Israel towers above the helpless Palestinians – a vast Vesuvius against the tiny fumaroles of Fatah, Hamas and Hezbollah. Just look, they say, at the disparity in fatalities: 17 Israelis killed by rockets launched from Gaza in the past seven years; 400-plus Palestinians killed by the Israeli Defence Force (IDF) in Gaza in the past seven days.
"Ah, yes," reply the friends of Israel, "but lift up your eyes and take in the wider picture." Israel stands alone, an island of Judaism in an Islamic sea. How many Arabs inhabit the nation states bordering Israel? 110 million. How many Jews live within its borders? 5.4 million.
Had the Israelis simply exchanged a life for a life they would long since have ceased to exist as a people. Only the credible threat of massive and disproportionate retaliation keeps the State of Israel from sinking beneath the waves of a multinational jihad. To show mercy is to invite Israel's own catastrophe.
So, what is to be done?
Does history offer a solution?
Well, that sort of depends on who is asking the questions.
The Palestinians can point to the crusader kingdoms carved out of the Holy Land by Frankish knights in the 11th and 12th Centuries. The most significant of these, the Kingdom of Jerusalem, lasted from 1099 to 1187. A mere 86 years, before it was effectively destroyed by the Uma’s great champion, Saladin. Not even the fearsome IDF of their time, the Knights Templar, were strong enough to resist the jihad their arrogance and cruelty had unleashed.
To the Israelis, however, a more persuasive precedent might well be found in their own history. After all, in ancient Judea, wasn’t it the Jews who found themselves in exactly the same position as present-day Palestinians: under the heel of a brutal army of occupation? Was not the Great Jewish Revolt of 66-73AD, and the second, far more destructive Jewish-Roman War of 132-35, the intifada of their time?
And what was the outcome of those revolts? Massive retaliation: countless deaths, towns destroyed, lands seized, and, in the wake of that final, cataclysmic defeat, the "ethnic cleansing" of Judea – the 1,900-year Jewish Diaspora. To many Israeli politicians a Palestinian Diaspora must recommend itself highly as the most effective remedy for Israel's ills. One last push; one last sweep; and, following the precedent of Imperial Rome, these stiff-necked opponents of peace and order could be driven from the land forever. (Or, alternatively, for 1,900 years - which amounts to much the same thing.)
"Impossibel!" you say. "Unthinkable!" Not really. What, after all, was the policy of the Allied Powers regarding the German speakers of Eastern Europe at the end of World War II - if not "ethnic cleansing"? The intractability of the problems caused by ethnic Germans living amongst Poles, Czechs, Hungarians and Rumanians led to the wholesale uprooting of entire communities. Families which had lived in the same towns, farmed the same land, for hundreds of years were simply put on trains and "resettled" in the West. Under the auspices of the "Big Three" - the USA, the USSR and the British Empire - Eastern Europe was ruthlessly, and very effectively, "cleansed" of its German-speaking population.
The Germans, of course, had sent six million of Europe’s Jews in the opposite direction, to an altogether more permanent kind of "resettlement".
And can anyone seriously doubt that, should Hamas "win", their "final solution" would be any different?
This essay was originally published in The Timaru Herald, The Taranaki Daily News, The Otago Daily Times and The Greymouth Evening Star of Friday 2 January 2009.
Posted by Chris Trotter at 17:25

It's the poor bloody Canaanites I feel sorry for. Alas, history is written by the winners.

Chris, I usually find your writing inspired and inciteful. This, however is a fantasy piece that bears no resemblance to the reality on the ground.

Hamas "winning" would mean that the people of Gaza might be able to remove the stranglehold that Israel has imposed on them and at least have access to food, water, electricity and the vague possibility of a half decent existence.

The actions of Israel are like that of a madman. A one trick pony that uses overwhelming force to defeat an idea. Each time the result is the same - the idea gets stronger and more and more people support it.

If the British had dealt with the IRA by carpet bombing Southern Ireland, support for the IRA would have galvanised internationaly amongst the Catholic population and the Irish problem would have spiraled out of control. Remember that the IRA directed attacks and killed UK civilians on British soil. Ultimately the Irish situation was solved by talking and mutual respect but not by overwhelming force.

Please get real. Israel is the only nuclear power in the Middle East and is supported militarily and financially by the USA. Western European pays lip service to the Palestinian cause and most Arab governments are effectively US clients. If indeed the extremists of Hamas dream of a "final solution" for Israel it will only ever be a dream when one considers the balance of power in the region.

If Israel wants security they should dismantle the settlements and honestly negotiate with the people who's land they are occupying. Until they do that they will never be able to occupy the moral high ground and they will always be resisted.

I must say I agree with Steve on two counts. I too have been an admirer of Chris' writing and am disappointed in this piece.
History is very relevant to this matter. The Jewish State is founded on an historical claim to the land. One that is spurious according to Shlomo Sand, Professor of History at Tel Aviv University. See:
http://www.haaretz.com/hasen/spages/959229.html

It is to History we must look if we are to understand the rockets being fired at Sderot.
This town was founded in 1951. It stands on the ruins of Najd, an Arab village that was ethnically cleansed by Jewish militia - before the State of Israel was declared and before the Arab league moved to stabilise the area on 15 May 1948.
The surviving villagers, who were driven to Gaza and remain there, still possess legal title to over 12,000 dunums of land. They are prohibited from returning and have received no compensation. Jews owned about 400 dunums in 1948.
(Khalidi, Walid, ed. All That Remains: The Palestinian Villages Occupied and Depopulated By Israel in 1948. Institute for Palestine Studies: Washington, D.C., 1992.)
In my view, these facts give a whole new perspective to the conflict.

Every evening Al Jezera shows another pile of Palestinian corpses outside shattered buildings is good for another 1000 recruits to Al Qaeda. Despite most of the Middle East being run by corrupt US yes-men, current Islamic fanaticism would largely melt away should peace ever break out in Palestine. The Arabs by nature are no more fanatical than anyone else and very forgiving. Except in the case of inter-tribal conflicts, they do not harbour grudges once wrongs are righted.

If justice were seen to be done in Palestine, Israelis would have nothing to fear from their neighbours. Of much more concern would be the reaction of their own fanatics, who, as you have alluded to, continue to cling to Zionism's principle of ethnic cleansing. However, the removal of threats from neighbouring countries would at least result in their political marginalisation.