The Moral Equivalent of War 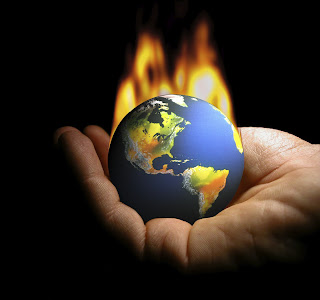 A World to Win: Containing CO2 emissions must become the moral equivalent of war.
AS THE WORLD’S LEADERS gather in Copenhagen, the world’s peoples wonder whether anything good will come from their going.
It is, after all, barely a week since President Barack Obama stood before the grey-clad cadets of the West Point military academy and pledged a further 30,000 young men and women (and an estimated $1 trillion) to the conflict in Afghanistan.
War, it seems, can still lay claim to the best part of our blood and the most part of our treasure. If only the battle to save our planet could inspire such generosity.
The question of why war, alone of all our endeavours, possesses the power to inspire such tremendous collective exertions and unstinting sacrifices by human communities, is not a new one. Ninety-three years ago, the American scholar William James, addressed precisely the same question in his famous essay entitled: ‘The Moral Equivalent of War".
Humanity, he argued, must find another way to mobilise all that is brave and noble in the human soul, or the warriors of our species will never want for either willing volunteers nor eager financiers. James’s solution, richly ironic in the context of the events now unfolding in Copenhagen, was to enlist the nation’s youth in a "War against Nature".
"If now — and this is my idea — there were, instead of military conscription, a conscription of the whole youthful population to form for a certain number of years a part of the army enlisted against Nature … To coal and iron mines, to freight trains, to fishing fleets in December, to dishwashing, clotheswashing, and windowwashing, to road-building and tunnel-making, to foundries and stoke-holes, and to the frames of skyscrapers, would our gilded youths be drafted off, according to their choice, to get the childishness knocked out of them, and to come back into society with healthier sympathies and soberer ideas."
James’s idea of conscripting the nation’s youth to wage the moral equivalent of war struck a deep chord in the American psyche. It informed the thinking behind President Franklin Roosevelt’s Conservation Corps, and President John F. Kennedy’s Peace Corps.
There was, of course, a strongly progressive edge to his proposal. It was wrong he said that some human-beings should struggle all their lives for the bare necessities, while others enjoyed a leisured existence as unproductive as it was ignoble. To have young people of all classes, struggling together: not for a lifetime, but as a part of the process of becoming full citizens of the "co-operative commonwealth"; such was James’s vision.
Ninety-three years on, and James’s ideas seem even more relevant than when he first explained them in 1906 – just eight summers before the cataclysmic horrors of World War I.
Today, however, it is not a "War Against Nature" that our generation is called to fight, but a war in Nature’s defence. And it is not merely the youth of the world who must be summoned to battle (though, as always, they will lead the charge) but whole populations.
If the battle against Climate Change does not become the moral equivalent of war for all the peoples of the Earth, then not only the battle, but the Earth itself, as a planet hospitable to human civilisation, will be lost.
Our government – every government – must be willing to mobilise the population as it was mobilised during World War II. Our generation must plant its own "Victory Gardens" and run its own "Salvage Programmes". We must learn, as our parents and grandparents did, to ration scarce resources, pay special taxes, and buy as may "War Bonds" as we can afford.
There will, of course, be people who whisper that the enemy isn’t really our enemy. That all of our individual and collective sacrifices are quite unnecessary. And that, if only we would stop listening to the "alarmists" and "extremists", then this needless and terribly costly campaign could be brought to a happy conclusion.
In 1940, England was full of such whisperers. The British ruling-class, in particular, was riddled with defeatists, Nazi sympathisers and traitors. Back then people called them "Quislings" and "Fifth Columnists".
If, therefore, the battle against Climate Change has to become the moral equivalent of war, with all the sacrifice that war entails, then Climate Change Denial must become the moral equivalent of treason.
Over the top?
No.
The stakes really are that high.
This essay was originally published in The Dominion Post, The Timaru Herald, The Taranaki Daily News, The Otago Daily Times and The Greymouth Evening Star of Friday, 11 December 2009.
Posted by Chris Trotter at 14:21

Global Warming and Carbon Trading is a fraud promoted by mega-bank banksters like Goldman Sach. The result will be to transfer billions of dollars from the poorest in our societies and the world into the pockets of the very richest, all the while suppressing global growth.

The ends do not justify the means.