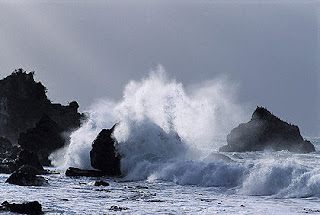 The foreshore and seabed remains the property of all New Zealanders. What belongs to nobody, belongs to everybody.
WELL, there you go. As so many on the Left of New Zealand politics have been insisting for more than eighteen months, the Maori Party’s association with the National Party could only end in disappointment, confusion and betrayal.
John Key has conceded nothing of importance in relation to the proposed Foreshore & Seabed repeal legislation presented to the Maori Party. Both sides are looking for an alternative expression to "Public Domain", but apart from that, all the essentials of National’s "solution" to the current Act remain unchanged.
The problems raised by Mark Solomon on TVNZ’s Q+A programme have not been addressed. Those lucky enough to hold title in fee-simple to sea-front property will suffer no diminution of their rights. Tribes which, through the arbitrary exigencies of history, can present no evidence of continuous "ownership" of coastal territory remain excluded from the pursuit of customary title through the courts.
And no matter what the Crown and the Maori Party end up calling the foreshore and seabed, its residual title-holder (since someone must, ultimately, have the final say) will be the Crown in Parliament.
It is a fundamental principle of the Westminster System that what a Parliament confers, a Parliament can also withdraw. Present legislators cannot bind future legislators.
Reading the Prime Minister’s statement, I’m reminded of the infamous words of Rob Muldoon – uttered following the negotiation of a deal with Social Credit over the Clyde Dam enabling legislation back in 1982.
Responding to a journalist’s question about the nature of the horse-trading that had just gone on behind the closed doors of the Prime minister’s office, Muldoon quipped:
"Horse-trading? Heh! I’ve still got all my horses!"
Posted by Chris Trotter at 17:14

The left has been right royally screwed. Again.

So Brownlee is free to make deals re selling prospecting rights to mining companies for seabed and seafloor mining now?

Poor, naive, little Lew. All this time he thought it was about flowers in our hair and mana enhancement for Tariana's people, when really, well, you know, that's REAL leather in the back of those limousines. Smell it, breath it in, that success your smelling and oh Lew - want a cigar? they're Cuban you know, I get them from a Latino guy at the American embassy. Now tell me that ain't getting one over the white fellas???

I don't think so, Adolf.

Did you happen to watch the television coverage of the PM's joint press conference with the MP this afternoon?

It wasn't the Left that got right royally screwed today.

Agreed Chris. The expressions on Turiana's and Sharple's face spoke volumes as the smiling assassin's mask slipped a little further.

It doesn't happen often, Chris, but I find myself in agreement with you again.

Well, almost-full agreement. It looks to me like the Iwi Leadership Group has caved. Whether the māori party applied pressure on them to cave, or whether they're just following, is an open question. But the ILG holds a sort of proxy mandate, so the māori party have kept their end of the deal: the act is getting repealed, claims can be tested in court, and it's all been done with the nominal support of their people. Whether this translates to the actual support of their people is a matter for them to decide, though I strongly suspect it doesn't.

Sanc, my position's been pretty consistent: while the option was there, they were right to pursue it with a view to getting the best they could out of a bad situation. But having settled for what is, in my view and I think the views of many Māori, a pretty poor offering, they've failed to do as well as they might have. You can say it was inevitable, and that's fair enough, but my argument was never that they would make the right decision; it was that whatever decision they made was theirs to make. They've made their bed, let them lie in it, and may the Gods help them (because nobody else is going to). That's tino rangatiratanga.

You and Chris may yet get your wish that their people abandon the māori party and come rushing back into the arms of Mama Labour, and I wouldn't blame them for a moment if they did.

I agree (this must not become a habit!) Lew, both the Maori Party and the ILG would appear to have opted for a bird in the hand. It's a reasonable position, I suppose, given the likely political consequences of their walking away from National.

They, and especially the ILG lawyers, will now use the time required for the legislation to be drafted and introduced to secure the maximum possible in behind-the-scenes negotiations and lobbying. They have some heavy-hitters in this regard and we may be surprised at the results.

From the Pakeha side, the really interesting thing to watch for will be the rise (or failure to rise) of some sort of pressure group to contest the repeal legislation.

If such a group emerges it will be an important test of how far NZ has come since 2004. If it fails to attract mass support then the Government will breathe a huge sigh of relief, pass the legislation, and move on.

If, however, it turns out that the sleeping dogs kicked awake at Orewa have lost none of their bite, Key will face some very hard decisions.

Will he dismiss a Pakeha "hikoi" as the work of "haters and wreckers" and refuse to meet its organisers?

Who the hell will raise a pakeha hikoi? And if they do will it not just result in Key calling an election that will make ACT and the MP entites of the historic record?

I don't think the average New Zealander was ever too concerned about the formalities of ownership over the seabed and foreshore. What did worry the masses was the idea that suddenly the foreshore in its entirity would become owned freehold by iwi who would disallow or toll booth public access.

If Rob had dealt in good faith with Social Credit & that rare progressive pioneer Bruce Beetham i presume, the much maligned legacy of his 'think big' schemes would have been instead a high point in New Zealand progressive history to rival that of another pioneering credit against the political backdrop of the time - John A Lee from around the 1930s.

From what i have gathered, the penny did drop for Rob but by that time it was too late....as the political left's radicalization of the time was already ushering in Rogernomics.

Praising Think Big today is rather un-PC now, but the fact is, without the Clyde Dam, we would be facing a combination of very high power bills and rolling blackouts in winter.

I always thought the left were on the wrong side on this issue (especially bearded Che t-shirt wearers, who seem to embrace privatisation when the private owner is brown). The fact of the matter is that a crown owned coastland, with the beaches open and avalible free for all (except in the cases of ports and the like), is what the left should be standing for, if it had any guts.

There is nothing more progressive than a publicly owned beach or coastal reseve, where people of all classes and races gather to pursue their respective recerational activites. Not to mention the kiwi tradition of owning a bach at the beach.

Handing iwi the right to claim effective ownership will kill all that stone dead, and we will have to beg Maori to even take a picture of the beach. If I had children I would hate to have to tell them they cannot play on the beach because they are not Maori.

The left need to have some guts on this issue. Privatisation of our beaches and national parks by transfer to iwi is unacceptable, and public ownership is something the left should really be fighting for.