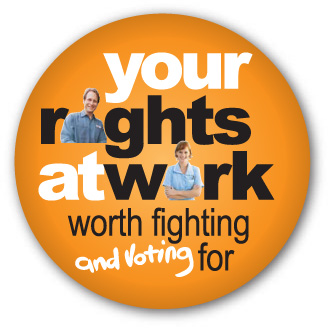 Right[s] on the Button! The campaign of the Australian Council of Trade Unions against John Howard's WorkChoice Australia attack on workers' rights was crucial to his government's 2007 defeat.
THE GRUEN TRANSFER, is a fine example of what a real state broadcaster, dedicated to genuine public interest television, can achieve. Produced by the Australian Broadcasting Commission (ABC) this half-hour television show takes a light-hearted weekly swipe at the global advertising industry.
One of the most enjoyable segments of the show is called "The Pitch" – in which "Creatives" from competing agencies are given an outrageous/impossible brief (in a recent episode they were asked sell ice to Eskimos) and told to come up with a 30-second TV spot.
Perhaps the most famous of these briefs involved making the case for an Australian invasion of New Zealand. "100% Pure NZ", runs the opening line of the winning entry. "0 air force", it continues. "100 percent there for the taking", gloats the penultimate caption as Aussie jet fighters streak across New Zealand’s undefended skies firing missiles on the helpless inhabitants below. The triumphant ending: "100% Ours".
Pondering the enormous difficulties currently confronting the Council of Trade Unions (CTU) as it attempts to mobilise public opinion against the National Party’s employment law "reforms", it struck me that "Create a favourable public perception of the New Zealand trade union movement.", would definitely qualify as a future brief for "The Pitch".
And before you shake your head and tell me "it can’t be done", let me tell you about a programme I recall from the days when New Zealand, too, had a "real state broadcaster dedicated to producing genuine public interest television".
It was called the Dean/Edwards Show (after its eponymous hosts Michael Dean and Brian Edwards) and was broadcast in front of a live audience from the Avalon television complex in the Hutt Valley. Dean/Edwards came under the rubric of Television One’s News and Current Affairs and was, to put it mildly, politically challenging.
The programme in question had taken advertising as its theme and its producers had approached a local agency to demonstrate the awesome powers of the industry. They were to come up with a positive ad’ for the most loathed trade unionists in the country at that time – the infamous Cooks & Stewards Union. These were the workers responsible for looking after passengers on the Cook Straight ferries, and they were notorious for timing their industrial disputes to coincide with public holidays.
The 60-second ad the agency produced featured the theatrical skills of the actor Ian Mune, and more than met the Dean/Edwards Show’s producers’ expectations. It was, quite simply, a little masterpiece. In just one minute the villainous Cooks & Stewards were transformed into no-nonsense working-class heroes.
So, you see, it can be done.
And if you need any further convincing, just take a look at the series of ads the Aussie unions ran in 2007 against the Liberal Party’s detested "WorkChoice" legislation. According to most Australian political commentators, these ads played a crucial role in defeating John Howard’s government.
There’s no doubting our own CTU has the resources to fund such a campaign, but do they have access to the sort of skills that turned the Cooks and Stewards into heroes? And, even if they secured the services of a top-flight agency, would the major networks agree to air their product?
When it comes to getting controversial ads broadcast, New Zealand unions have had some very bad experiences. For some reason the Advertising Standards Authority has found it extraordinarily difficult to affix its seal of approval to union-produced television advertisements. Somehow they’re always deemed to be in breach of the Authority’s strict rules.
Even so, were I in CTU President, Helen Kelly’s, shoes I’d be thinking long and hard about commissioning a series of ads designed to change the public’s perception of what unions – and unionists – are about. And I wouldn’t just be looking to the big ad agencies for ideas. In this age of the Internet and cheap computer software, I’d be appealing to every young digital designer, every student-flat Fellini, to send me their ideas as well. And if the ASA stood in the way, well, there’s always You-Tube.
As Forest & Bird and Greenpeace know only too well, there’s a whole new arsenal of weapons available to political activists in the 21st Century that simply weren’t available to the trade unionists of 1890, 1913 and 1951. Policemen can shut down and confiscate a printing-press, but they can’t seize every PC or shut-down the Internet – not unless they want a real fight on their hands.
What Helen Kelly and the CTU needs is the equivalent of Greenpeace’s "Sexy Coal" video clip – and the power of celebrities like Robyn Malcolm and Lucy Lawless to sell it. Below the radar of the despised "MSM", that one clip did more to put 40,000 anti-mining marchers on the street than any other piece of propaganda.
The Pitch is "Union Power". Any takers?
This essay was originally published in The Press of Tuesday, 3 August 2010.
Posted by Chris Trotter at 17:39

Is the below article from the Dom Post true?I very much doubt that NZers are aware of the extent of these so called "rights" But they will no doubt be made aware and there is no way the NZ public will support Unionists having more power of entry than a Policeman.
It is ridiculous and no wonder public support for Unions contimues to die.

"Many employers are frankly dismayed when they seek legal advice after a union official walks into their building.

They find it difficult to accept that union officials are entitled to walk around their premises at will, talking to members and seeking to recruit new ones. As it stands, the law allows unions to enter business premises and hold discussions with employees. They don’t even need to give prior notice to the employer.

Provided the union believes that there are employees working in the workplace who fall within their membership rules, they can enter. The only restrictions are that the access is ‘‘reasonable’’, in terms of time and manner, and that the union complies with health and safety, and security procedures.

Once union officials have entered the workplace they are allowed to hold ‘‘discussions’’ with employees, including for the purposes of recruiting members. There is no time restriction on these ‘‘discussions’’, provided they do not exceed a ‘‘reasonable’’ duration – and the employer is not allowed to deduct money from an employee’s wages for time spent talking to a union rep.
Attempts by employers to constrain unions’ broad rights of access have met with challenge in the Employment Relations Authority.

In one case an employer had been obliging enough to provide a union official with a swipecard. The union official saw this as an invitation to explore all areas of the employer’s business – including the HR area, where employees’ confidential personal files are kept.

When the employer asked for the swipe card to be returned, the union filed a claim in the Employment Relations Authority that the employer was denying them their rights of access. This was despite the fact that every other visitor to the premises must sign in and be accompanied by a staff member at all times."

Chris, you will whistle for your campaign. The CTU leaders don't want "union power". They want more productivity and Labour list seats.

Good suggestions Chris, have made similar my self to union friends. The Youtube clip idea is great, the CTU has previously produced budget videos-the ‘mono-kini’ ACC clips shown at the Rugby Sevens in Wellington. A union I am associated with sent a few grand over for the ACTU media campaign and the feedback we got was it was really effective reaching mainstream Aussies. It is not all about elections, important as they are. A union consciousness needs re-establishing among ordinary people.

What a defeatist shit you are anonymous if you are a workers supporter, or are you perhaps not really the union type?

Now now Tiger Mountain. Supporting workers doesn't always mean being supportive of the Unions. You can support workers, much the way I do and not be involved with the Unions or agree with them much.

Good article Chris as it is a much better look at what I failed at trying to explain on previous blogs. Unions need a facelift and re-energizing effect if they are going to recruit people currently entering the workforce who think anything before 1990 is ancient.

Tiger Mountain, if you really want "defeatist" take a look at the CTU website sometime and see what their values and priorities actually are.

The YouTube Heather Smith - unfair dismissal story that the CTU has put out today was a good idea. I think we need to get a few sexy celebs though to come out and support the campaign - as they did for the anti mining campaign. Thta's how we will get more people to the rally on the 21st. The union movement definitely needs a facelift and engage its youth and creative types to help them do it, Skyler