"All Politics Is Local" 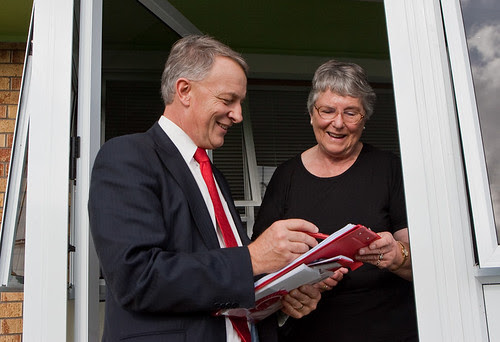 Winning hearts and minds doorstep by doorstep: Phil Goff must reconnect with Labour's base if he is to have any chance of winning next year's election.
WHAT’S GOING ON? At the local government level voters execute a sudden lurch to the Left, while nationwide opinion polls show them simultaneously clinging to the Right. As the Lost in Space robot used to say: "That does not compute."
Let’s try to make it add up.
The former Speaker of the US House of Representatives, Phillip ‘Tip’ O’Neill, said that "All politics is local."
In other words, unless there is a real connection between politicians and voters: in the places where they live, and at the level of their day-to-day lives; electoral success will likely prove elusive.
It’s not enough to simply offer the public what they want, they’ve got to be convinced you can deliver it. Nor is it sufficient to simply reflect the voters’ concerns, you have to make them believe that you share them. That you, in the words of the ‘great empathiser’, President Bill Clinton, "feel their pain".
As Labour Party members gather together in Auckland for their annual conference, it is sobering to reflect that while the city’s newly-elected Mayor, Len Brown, ticks all of Tip O’Neill’s boxes, Labour’s leader, Phil Goff, does not.
What’s lies behind Phil’s lack of connection with the voters?
His working-class background and his obvious political competence should both argue strongly in his favour. And yet there are doubts – and an obvious reticence on the electorate’s part to invest emotionally in the Labour leader’s quest for the top job.
As an historian, my instinct is to explain the present by looking into the past.
Phil’s past is very instructive.
He’s one of a whole generation of young Labour politicians (including Mike Moore, Richard Prebble and Roger Douglas) who took away from Labour’s disastrous 1975 election defeat some very painful lessons about the acute political vulnerability of radical governments.
One of the most important of those lessons was the need for economic credibility. The fate of both Bill Rowling and Gough Whitlam convinced Labour’s ‘Young Turks’ that if the leading elements of the business community, the civil service and the news media remain unconvinced by your government’s economic policies they have the power to undermine and, ultimately, destroy it.
The faction to which Phil Goff attached himself in the early 1980s was absolutely determined that the very same forces which had stood in front of the Third Labour Government would be standing behind the Fourth. Nothing which he has said and done so far as Leader of the Opposition suggests to me that Phil has abandoned this objective.
He has had no "Greenspan Moment". No dramatic public admission (as there was by the former Chairman of the US Federal Reserve) that the economic policies he and his colleagues adopted to secure the backing of big business, Treasury and the nation’s editors have now been tested to destruction.
On the contrary, Phil still believes that: "a well-functioning market system is the most effective and efficient way of organising an economy".
For those on the left of New Zealand politics, indeed for all those who’ve voted Alliance, NZ First or The Greens because they simply could not bring themselves to vote for the party of Rogernomics, this is profoundly disappointing.
More importantly, it’s disconnecting.
On Saturday afternoon, the CTU president, Helen Kelly, will come to Labour’s Conference bearing the trade union movement’s Alternative Economic Strategy – a document based on the principles of Fairness, Security and Participation.
Assuming Phil comprehends the importance of atoning for the sins of his neoliberal past, he could use his own keynote speech to Labour’s Annual Conference to reassure his base that the distilled ideas and aspirations of organised labour will once again constitute the bedrock upon which the Labour Party assembles its policy platform.
The CTU’s strategy contains a host of fresh solutions to meet all those "simple, mundane and everyday concerns" that Tip O’Neill understood to be the prime drivers of politics.
Re-connect with the local, Phil, and by Christmas next year you’ll be Prime Minister.
This essay was originally published in The Dominion Post, The Timaru Herald, The Taranaki Daily News, The Otago Daily Times and The Greymouth Evening Star of Friday, 15 October 2010.
Posted by Chris Trotter at 17:44

You're getting in the habit of being prophetic Chris... You must be pleased with the new direction of the Labour Party...

An extraordinary weekend, Anonymous. I was there when Labour lurched to the right, and to be quite honest I never thought I'd live long enough to see it swing back to the left.

And if you had told me that Phil Goff would be leading the charge I'd have questioned your sanity.

It's a funny old world.

Tipp O'Neill was right when he said all politics were local. He was simply paraphrasing Patrick Kavanagh, who wrote:

"I have lived in important places, times
When great events were decided, who owned
That half a rood of rock, a no-man's land
Surrounded by our pitchfork-armed claims.
I heard the Duffys shouting "Damn your soul!"
And old McCabe stripped to the waist, seen
Step the plot defying blue cast-steel -
"Here is the march along these iron stones."
That was the year of the Munich bother. Which
Was more important? I inclined
To lose my faith in Ballyrush and Gortin
Till Homer's ghost came whispering to my mind.
He said: I made the Iliad from such
A local row. Gods make their own importance."

Nothing political ever started out as a global event, but as a local issue.

I'd be keen to read a report on the conference, Chris.

It's in the pipeline, Scott, don't you worry.

Oh, and many thanks for the kind words on "Reading The Maps".

You see, keen but courteous debate does have its effect - even on Old Settler-types like me.

Chatting with an eighty three year old cow cocky from the Hauraki Plains. He would never ever have voted Labour. His comments;
"I like what that Phil Goff has to say about foreigners not being allowed to buy N.Z. farmland. Now the price might come down so that New Zealanders can buy it."
When dyed in the wool tories like him, like your policies, then something might be going right.

Now the challenge for for Labour is to stand firm in what is going to be wave after wave of attacks from the neo-liberal establishment. The farmers, the business sector, the right-wing media, and finally Gordon Gekko's mini-me with his Thatcher-wannabe fembots are going to have a left-wing Labour party dead in its sights - I notice that they are already starting to have a go now. Things are going to get *very* nasty in the months ahead. Neo liberalism is coming to an end - everyone knows it. But the right arent going to give up without a fight.

I must question this, what right-wing media are you speaking of? Even the granny Herald is sloping leftward nowdays.

You must let me know at which dairy you buy this edition of the NZ Herald, Anonymous. My one's as right-wing as all hell!

Excellent (though belated) swing to the Left by Labour. My only concern is Goff's strategic emphasis (according to DomPost) on reconnecting specifically with Provincial NZ.

Nothing, of course, wrong with that. But, as I've said before, the focus needs to be first and foremost on Auckland, Auckland, Auckland !!!
One third of voters within a relatively small geographical area / huge Lab-to-Nat swings there in both 2005 and 2008 / and indications in the local election that the Nat's support there may well be very softly-aligned. It's a no-brainer.