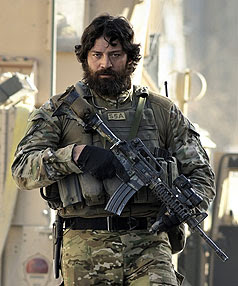 Hero - or side-show attraction?: It's hard to see how hawking the reputation of Victoria Cross winner, Corporal Willie Apiata, to fee-paying Boy's Own businessmen is going to boost the Special Air Service's morale. Blurring the line between the mission of our our armed forces and the objectives of private sector interests can only set a very dangerous precedent.
THE SPECIAL AIR SERVICE (SAS) agrees to host a group of senior business leaders for a cool $35,000. The Government’s Defence White Paper encourages Public/Private Partnerships in our armed forces. Both stories are broken in the same week. Are we supposed to believe this is a coincidence?
That’s not how the world works.
Quite obviously the SAS story was leaked to The Sunday Star-Times’ Jonathan Marshall – but by whom?
Did it come to him from an SAS source outraged at what is happening within the unit, and even more fearful of the changes about to overwhelm the New Zealand Defence Force as a whole?
Or, was it released to Marshall by the Top Brass of the NZDF as a sort of pre-emptive strike against SAS dissidents passing-on the details of the businessmen’s Boy's Own adventure to a genuine investigative journalist like Jon Stephenson?
Did Stephenson (whose series of painstakingly researched, impeccably sourced and on-the-spot reports from Afghanistan in The Sunday Star Times has seriously embarrassed the NZDF) already have the story? Was that why the Top Brass leaked it to a celebrity-chasing reporter like Marshall – who stands for everything genuine journalists despise?
If so, it was a shrewd move. While the Defence Minister, Dr Wayne Mapp, has vowed to investigate the civilian use of SAS weaponry and ammunition, the Prime Minister has airily dismissed any suggestion that what occurred constitutes either a serious breach of military regulations, or a dangerous precedent.
I beg to differ. It is inconceivable to me that allowing civilian businessmen to fraternise with our special forces personnel, be admitted to their base, learn their identities, handle and discharge their weapons, and study (albeit at the most rudimentary level) the principles and protocols of their leadership training could be anything other than the most egregious breach of military regulations.
I also fail to see how introducing Corporal Willie Apiata to these businessmen in exchange for a substantial monetary donation to the unit’s private family-welfare fund can be interpreted as anything other than a gross insult to this country’s highest military decoration, as well as a gratuitous affront to the honour and dignity of a courageous soldier.
Turning a hero into a side-show attraction doesn’t strike me as the best way to improve SAS morale.
Nor, I must say, does the White Paper’s idea of blurring the lines between Her Majesty’s Armed Forces, the Civil Service, and private sector businesses.
Even the most cursory examination of the United States’ experience of "outsourcing" traditional military functions to private sector contractors should have been enough to warn our government off the idea. Do the names Brown & Root, Haliburton and Blackwater mean nothing to Dr Mapp? To Bill English? To the PM?
They should, because the effective privatisation of many of the United States’ most sensitive and vital security and military functions has not only resulted in a massive transfer of taxpayer wealth to private business interests, but it has also tangled-up the lines of military authority.
American army officers swear allegiance to the American Constitution and the popular sovereignty which it enshrines. But, who do Haliburton business executives and Blackwater security guards swear allegiance to?
It is clear that the neoliberal project has moved well beyond its original acceptance of "The Night-Watchman State", in which the military, police, judicial and custodial functions of the polity remain firmly in public hands. Neoliberalism now proposes a radically new "Neo-Feudal" model of social control in which the coercive powers formerly monopolised by the State are transferred into private hands.
Free Market Leninists that they are, the neoliberal revolutionaries have clearly come to the conclusion that, with the destruction of all other independent centres of non-market power, the armed forces will be the only institution capable of physically overthrowing the neoliberal order. Far better to decommission its potentially dangerous service ethos and disperse its coercive military power among private corporations and individuals. Only then will the Neoliberal Revolution truly be safe.
Fiji knows all about this blurring of the lines between businessmen and soldiers. It was, after all, the treasonous collaboration between a shadowy group of Fijian businessmen and the Fijian Army’s SAS equivalent – the Counter Revolutionary Warfare Unit – which accomplished the coup d’etat of 2000. Just as it was Commodore Frank Bainimarama’s energetic reassertion of the Fiji Republic’s executive authority which brought "Speight’s Coup" to an end.
It was Bainimarama again, in 2006, who carried through the neoliberal Right’s worst nightmare – by ordering, in the name of the people, the military overthrow of the corrupt racist kleptocracy which was bleeding Fiji dry.
The Royal New Zealand Army, Navy and Air Force remain this country’s last line of defence – in more ways than one. They deserve not only our moral and political support, but also the full measure of public spending required to preserve the safety and dignity of service personnel, their families, and the free citizens of New Zealand.
Posted by Chris Trotter at 16:09

Agreed (particularly the bits about Fiji).

And why hasn't Willie Apiata got his third stripe yet or, better still, been sent on an officer training course?

Would it bust the defence budget?

From my perspective, this is one of your better efforts Chris, on a topic you usually do not address (BTW, I much liked the Gramscian angle in the subsequent post as well). In fact, this post is outstanding for its insight and depth.

The root of this state of affairs lies in the neoliberal state shrinkage and "contracting out" process, which results in world-class elite troops used as entertainment for effete couch potato corporate elitists/wanna-be's willing to pay a fee. Bummer.

And with the "Wellington Declaration" binding us closely to the US and OZ in conflicts of their (not our) choice, Key and co. have made the NZDF not only corporate minstrels, but also corporate guns for hire under state sanction. Where is Labour in all this? As usual, playing it "safe," which translates into Phil not wanting to engage with something he knows all too well about.

Let this be clear: there is no way that the SAS would have agreed to this PR stunt without MoD and NZDF approval, and given the structure of things, the PM's office. There is also no way Key would have approved this if there was not a precedent because he is too timid to engage in unilateral bold moves that change NZDF policy. Goff's silence tells all that we need to know.

I agree with you that Jon Stephenson needs to be on the case on this one, although his cowardly SST editors may decline to pursue what was clearly his story in the first place and which that escracible excuse for a reporter who got credit for the "scoop" most clearly stole from Jon with his editors conivance.

Good on you for exposing another slice of why all is not well in Aotearoa.

I say again--sometimes you do not have to be theoretical to be good. In this case you are.

Isn't there a more basic issue than that -- the use of public time and facilities for private personal gain (in the form of a gain for this private trust fund). Theft as a servant anyone?