No Vacancy (A Christmas Story) 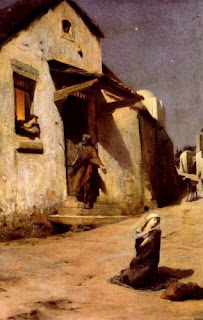 "And she brought forth her firstborn son, and wrapped him in swaddling clothes, and laid him in a manger; because there was no room for them in the inn." - The Gospel of St. Luke. The painting is: The Arrival at Bethlehem (1897) by Luc-Olivier Merson.
"WHO WAS THAT?" Martha set down her laundry basket with a thud and cast a practised eye over her husband’s face. She’d always been able to tell when he was troubled, and forty years of marriage hadn’t made it any easier for him to hide his feelings.
"Just a young couple looking for a bed. I told them we were full and sent them on their way."
"And?"
"And what?"
"Don’t you ‘and what’ me, Joel Benjamin. Something’s troubling you – out with it!"
"Oh, I don’t know, it just didn’t feel right sending them away. The girl was so very, very young, and so very, very pregnant. And the young fellow she’s travelling with – the baby’s father, I suppose – he wasn’t much older. Seemed like a steady sort of fellow though: a carpenter by trade. Both of them from some tiny place up north. They’re down here for the Census."
Martha snorted. "Him and everybody else. Town’s full of people waiting to be registered."
"That’s what I said. I told him he’d be lucky to find accommodation anywhere. Said he knew that already, that ours was the seventh place they’d tried. I tell you, Martha, the poor lad sounded desperate. And the girl seemed ready to have her baby at any moment."
"And you sent them away."
"What else could I have done – we’re full up. There’s not a spare bed in the house."
"May the Good Lord forgive you, Joel Benjamin! How could you send that poor girl out into the night to give birth in some ditch under the stars, with no help near except a frightened boy. Have you forgotten what can happen to a woman in those circumstances? What can happen to her baby!"
"I haven’t forgotten."
The old man takes his wife in his arms, presses her head against his shoulder, feels the gentle shudder of her sobs.
"I haven’t forgotten."
Martha pushes herself free from his embrace, furiously wiping away her tears.
"Go after them, you fool! Fetch them back! In the name of the son you could not save, Joel Benjamin, fetch them back!"
The old man hurries toward the gate, pushing past his startled guests, calling the gatekeeper to him.
"Amos! Amos!"
"Master?"
"That young couple. The pregnant girl. Tall fellow, strongly built. Did you seen them?"
They passed through a little while ago – they’ll be lost in the crowd by now."
The inn-keeper steps out into the crowded street, turning his head to right and left, trying to locate the pair in the gathering darkness.
"Mary said you would come."
The old man swings ‘round to find himself face to face with the young carpenter.
"I wanted to look for another inn, but she told me to wait here – that this was the place."
"I wasn’t lying to you about the rooms, you know. There’s not a spare bed to be had. But my wife would not hear of you being turned out into the winter chill – not with your good lady so close to her time."
Martha holds out her arms to the young woman.
"Come in my dear. This is no season to be giving birth alone. And there are skilled hands here tonight. Three Parthian priests, great healers it is said, arrived at sundown from Jerusalem. They were asking after a child.
"Dozens of children here, I told them. Take your pick! But they shook their long oiled beards at me and said it was a new-born child they were seeking. Well then, I said, I don’t like your chances, because there are no …."
Martha’s eyes widened in sudden understanding.
"Mine is the child they seek", the young woman said softly, "and it is here your wise men will find him. The Magi left a prince in his palace to see a king born in your stable."
"It is not worthy, lady."
"It is holy ground. You lost a son once, Martha. Tonight, God gives you another."
This short story was originally published in The Dominion Post, The Timaru Herald, The Taranaki Daily News, The Otago Daily Times and The Greymouth Star of Friday, 24 December 2010.
Posted by Chris Trotter at 09:12

Thank you, Chris, I read this with tears in my eyes.

"the unspiritual man does not recieve the gifts of the Spirit of God, for they are folly to him, and he is not able to understand them because they are spiritually discerned" - (I Corinthians 2:14)

Compare and contrast with our current leader's Christmas message, homey, and divine, perchance, for whom you weep:

“If we cancelled welfare to 330,000 people currently on welfare, how many would starve to death? Bugger all.”

Thanks Chris, a beautiful and timely reminder of compassion and love Merry Christmas
LynW

A lovely take on an old story. Merry Christmas Chris, and thank you for another year of thought provoking insight and discussion.

If National win next year, there are going to be a hell of a lot more young pregnant women who will be left out in the cold.

I dont think *anyone* really appreciates what is at stake next year.

Enjoy your holiday break Chris, and I hope Mrs Trotter got you a new keyboard for Christmas.

Youre going to need it.