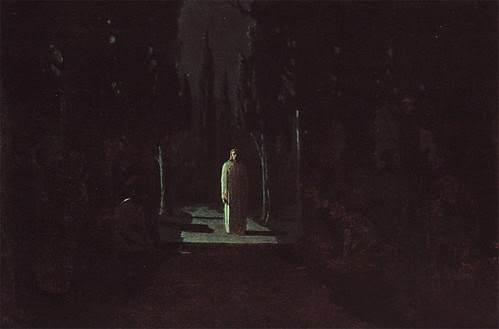 "Whom seek ye?"
I AM an old man, now, but still they pester me for the tale. Every Passover it is the same. “Malchus”, they cry, “tell us the story again. Tell us what happened in Gethsemane.”

It’s thirty years and more since that night. And the truth of the matter is, I’ve told and re-told the story so often, I’m not entirely sure which parts of it actually happened, and which are the sort of embellishments contrived by all storytellers to satisfy the clamouring of children and, more lately, grandchildren.

But the bones of the experience are strong enough – even now. Though mine are bent and brittle, the story’s limbs stand straight and true. How could they not? It was a night to remember.

It began with the unceasing chatter of Judas, my informant. Honestly, the man never stopped talking – though whether it was to me, to himself, to his master, or to God, I was never quite sure. An impassioned monologue nonetheless; as if he was summing up a case in the courts of law: marshalling his facts; setting forth his arguments; drawing his conclusions. And every few moments he would turn to me, his eyes wide and wild, and clutching at my cloak he’d say: “You understand, Malchus, don’t you? You must understand. He left me with no other choice!”

Oh yes, I understood alright. I recognised an uneasy conscience when I heard one. And I wanted to tell him: “Judas, we always have a choice.” But he was in such obvious pain that I bit my tongue.

Our destination was Gethsemane, the garden of a wealthy merchant. By the light of the waning moon I identified olives and cypresses, myrtles and bay trees. The air was rich with the scent of herbs. A path of flagstones took us into the shadows. All around me I could hear men adjusting their harness, loosening swords in scabbards; tightening their grip on the truncheons of spears.

The path ended in a circular clearing ringed by tall cypresses. Mute beneath the stars, they seemed to be standing guard over a tangle of cloak-swathed sleepers. Even the tongue of my loquacious companion was stilled. The silence welled up out of that clearing like a mist. I hardly dared to breathe.

The speaker had emerged from the shadows directly opposite us on the other side of the clearing. His white robes glowed in the moonlight like dull fire.

“Jesus of Nazareth”, I replied, though my voice seemed strangely altered – hoarse and harsh like the rattle of gravel.

At this point everything becomes confused. I remember Judas striding across the clearing followed by the Sanhedrin’s soldiers. The Nazarene met him halfway and the two men kissed. But, before the arrest could be made, a big burly fellow, one of the sleepers, had leapt up brandishing a lethal-looking sword. I rushed forward and the whole right side of my face was suddenly engulfed in pain. A hot flood of blood gushed down my cheek.

Then the man, Jesus, was speaking: “Put it away, Peter. Have I not said that all who live by the sword shall die by the sword? Sheath it now. My Father has filled this cup and I must empty it.”

Then his eyes fell upon my wound and he lifted his hand.

I felt as though I had fallen into a swollen river and was being carried fast by currents I could not resist. I thought I saw a great curtain rent in two and the Temple shaken to its foundations. The river itself seemed to be made of blood and fire, and with a roar to wake the myriad dead it crashed against the gates of Hell itself and they burst asunder.

When I opened my eyes the pain and the blood were gone. The Nazarene’s face was close to mine and he was smiling. With a surgeon’s eye he surveyed my ear and nodded in satisfaction.

“Guard me well, Malchus” he said, throwing a strong carpenter’s arm around my shoulders. “My Father’s cup must not be allowed to fall.”

Who led whom out of the Valley of Kidron, I cannot rightly say. All the way back to Jerusalem, though, his eyes were fixed upon the Eastern sky where, fast and bright, the sun was rising.

This essay was originally published in The Timaru Herald, The Taranaki Daily News, The Otago Daily Times and The Greymouth Star of Thursday, 21 April 2011.
Posted by Chris Trotter at 08:31

Thank you Chris, your reflections on other characters in familiar stories like this always make me pause and think.

You're most welcome, Ele.

Testify! I always enjoy your focus on minor characters in the Biblical stories. Very enjoyable. Have you every done one from the perspective of Judas?

Oh give it a flocking rest Malchus you shrivelled, bloodstained old goat's penis: we've heard your fly-blown attempt to rewrite history a thousand times. You forget, you lying old fart, that some of us were there: saw you piss youself when the others awoke; and that those that weren't there know exactly how you and your stinking acolytes treated thousands like the Nazerene - before and after. Not a tree left, you stinking, murderous scum.

Such a worry, for a while there, that the Nazarene's message caught on among the gilded geldings and their whores in Rome, wasn't it my slippery little asp? Love and forgiveness? Give to the poor? Give? When your entire history was one of ceaseless, rapacious take from the poor and the merciless slaughter of all and any who dared to dissent? Like the Nazarene himself, as you know full well, at your and your stinking bumboys of Ciaphus' family's hands, you craven, shit-shoving pig.

We can see your cunning plan a league away, you devious camel's arse. The smiling assassin at your head now has seen the folly of opposing the Nazarene's popularity: far better to swim with the tide and control its flow. Your pitiful stream of asses piss is but an old man's initial dribble in the torrent of lies to come: we know the Scribes are all bought already and have seen the first, disgusting drafts. And oh yes, such cunning! The putrid, heaving fable of how his own people - those very ones who not days before laid their very souls at his feet - they put him to death! Despite the thousandfold murders of the bloodthirsty Pilate and his dogs like yourself - himself yet a victim of his own blood lust! The audacity of the lie!

But ah, the satanic genius bred from your greed and fear! To, with the fevered scratchings of a few tortured and garretted pens, construct a monstrous fable and paint as devils for all time, a people of culture and innocence. And to corrupt, to the purpose of evil, the essence of purity.

You won't get away with it, you miserable old crumb of rat turd. Do you really think that years from now, His message will be lost? That rational and educated human beings will for an instant embrace both that message and allow oppression and injustice? Could worship Him and Mammon at the same time?

Only while you own the Scribes, maggot.

The path ended in a circular clearing ringed by macrocapapas. Mute beneath the stars, they seemed to be standing guard over a tangle of black clad doc martinied sleepers. Even the tongue of my loquacious companion was stilled. The silence welled up out of that clearing like a mist. I hardly dared to breathe.

“Who are you after mate?”

The speaker had emerged from the tent in the clearing. His white pjs glowed in the moonlight like dull fire.

“Urs Signer”, I replied, though my voice seemed strangely altered – hoarse and harsh like the rattle of gravel.

I stuck the muzzle of my automatic right under his nostrils.

"Right you little bastard, off we go. Safer communities together."

And Val Morse as Mary Magdelene?

If only judas, was to know.