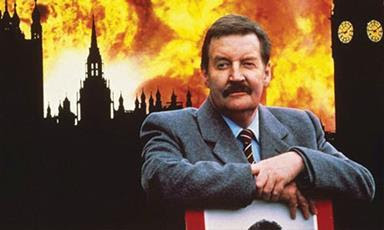 Let Justice Be Done - Though The Heavens Fall: In Chris Mullin's political thriller, A Very British Coup, the left-wing Labour Prime Minister, Harry Perkins, attempts to subvert the Establishment by adopting a policy of full disclosure of official information. Founded on secrecy and the manipulation of information, the Establishment (especially the Tory press) organises Perkin's removal. New Zealand's own Harry Perkins, Michael Joseph Savage, attempted something similar by mandating the live broadcasting of Parliament in 1936.


HARRY PERKINS, the hero of Chris Mullin’s brilliant political thriller, A Very British Coup, rides to office on a promise of open government.


To help him demystify the business of day-to-day politics, the newly-elected left-wing Labour prime minister recruits Fred Thompson, a top-flight investigative reporter. Together, the Prime Minister and his Press Secretary pursue a radical policy of full-disclosure.


Daily press conferences provide the news media with unprecedented access to Harry and his ministers. Cabinet papers are released automatically. The machinations of senior civil servants are no longer shielded from public scrutiny. What the government sees, the voters see too.


Pure fiction, of course, but Mullin (editor of the left-wing British weekly The Tribune when he wrote the novel in 1982) makes a very interesting point. What would happen to the news media’s power to shape public perceptions in an environment where rumour, speculation and tendentious political analysis loses all currency?


In circumstances of full disclosure, where there were no official secrets or confidential reports, the dark arts of the spin-doctor would no longer be required. Journalists who only told half the story would be laughed out of the Press Gallery. Speculation about ministerial motives, when the minister was ready and willing to answer all the journalists’ questions and make available the official advice upon which his or her decisions were based, would be pointless.


In such an open, information-rich, political environment, the analysis of the average political journalist would very soon be no more insightful or compelling than the ordinary citizen’s.

FOR A BRIEF PERIOD in the 1930s, New Zealand had a prime minister whose media instincts were remarkably similar to those of the fictional Harry Perkins.


In the two years he spent as Leader of the Opposition (1933-1935) Michael Joseph Savage gave considerable thought to Labour’s fraught relationship with the New Zealand news media.


With the exception of the union-supported Grey River Argus, the daily press was unrelentingly hostile to Labour’s political ambitions. The new medium of radio, however, offered a means of circumventing this near universal editorial hostility towards the Left.


In the United States, President Franklin Roosevelt’s “Fireside Chats” to the American people had proved extraordinarily effective at “cutting out the middle man”. And even in New Zealand, Colin Scrimgeour’s (Uncle Scrim’s) “Friendly Road” broadcasts on 1ZB offered ordinary citizens access to a much less jaundiced view of Labour and its ideas. (So much so that in the run-up to the 1935 general election the conservative National government jammed Uncle Scrim’s Sunday evening broadcast.)


More than ever, Mickey Savage was convinced that radio held the key to curbing the private presses’ power to shape political perceptions.


Prime Minister Savage’s first and most enduring media reform was to arrange for the live broadcasting of Parliament. The daily press had been highly selective in its reporting of parliamentary debates, but now ordinary citizens could tune into Parliament and hear their representatives explaining the new Labour Government’s policies directly to them.


Overnight, the highly partisan filters of conservative journalism became redundant. With the people able to hear for themselves what the Labour government was doing – and why – the daily newspapers had no option but to report the business of the House of Representatives honestly and impartially.

CHRIS MULLIN’S hero goes much further than Mickey Savage ever dared in opening up the business of government to public scrutiny – and pays a heavy personal price for his radical democratisation of official information.


But in having the British Establishment overthrow Harry Perkins’ government, Mullin is being no more than honest. Secrecy is indispensible to the sort of power that British – and New Zealand – politicians are accustomed to exercising. Just as the strict rationing of information is fundamental to the modern news media’s relationship with the wielders of political authority.


If knowledge is power, then the widest possible dissemination of knowledge must be the surest means of setting us free.


First and foremost, Mullin’s “very British coup” is a blow against the truth.


This essay was originally published in The Dominion Post, The Timaru Herald, The Taranaki Daily News, The Otago Daily Times and The Greymouth Star of Friday, 27 May 2011.
Posted by Chris Trotter at 12:53

Thanks for reminding us of that brilliant programme.

It so happens I watched that last weekend. Intended to watch just the first episode, then watched the second and the third in short order. But it ended just as things were getting interesting!

I have the book, which is rather brief, and remember the TV version which screened in the early 1990s. Keith Allen was particularly good as Fred Thompson, but the story was not exactly encouraging. The key part that I remember was the effect of the 'gilt strike', i.e. the City of London would not deal in the government's debt, and so the Prime Minister had to get a loan from the Soviets behind the back of the Chancellor. Somewhat unrealistic now, or is it, after all John Key seems to be doing deals with the Chinese Communist Party to fund our record fiscal deficit. Stranger than fiction?

By the way, did anybody notice the credit downgrade for the trading banks late last week, remembering that avoiding the downgrade on NZ debt, either public or private, was the sole aim of the Bleak Budget the previous week.