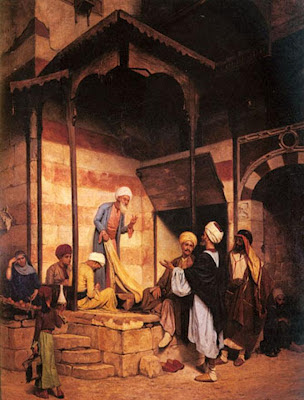 Meetings Of Minds: In the great trading cities of Baghdad, Damascus and Cairo, Islamic civilisation florished for close to 300 years. How did a culture once synonymous with tolerance and learning become so closely associated with violence and fanaticism?

THERE WAS A TIME when tolerance, compassion and the search for enlightenment were the singular virtues of Islam. When the peoples of Christendom still bent their knees to brutal mounted warriors, and the Papacy was little more than a trophy for the corrupt inheritors of Rome’s decaying grandeur, Islamic civilisation was the wonder of the world.


In the space of barely three centuries the followers of the Prophet Mohammed blended the best of the classical era’s legacy with the strict moral discipline and judicious social organisation of the Islamic faith.
In the Muslim Caliphate, which stretched from the Euphrates River to the Rock of Gilbraltar, Muslims, Christians and Jews co-existed in relative harmony. In return for a modest tax, the adherents of non-Islamic faiths were allowed to live in peace. In this tolerant environment scholars and craftsmen were encouraged to extend the boundaries of knowledge and technology. The resulting cultural flowering, subsidised by the immense wealth of the Caliphate’s trading centres, ushered in a golden age. Islamic merchants and traders dominated the exchange of the raw products of Europe and Africa for the finished goods of China and India.
Indeed, it might almost be said that the military and economic success of Islamic civilisation was the goad that drove Christendom to embark on its epic voyages of exploration, its exploitation of Africa and the Americas, and the rapid development of the mercantile and industrial expertise which ultimately permitted the peoples of Europe to dominate the planet.
Westerners all-too-easily forget that when Christopher Columbus set sail from Palos de la Fonterra on 3 August 1492, the Eurasian landmass was dominated by two vast super-powers: the Ottoman and Chinese empires. The kingdoms and principalities of Christendom were bit-players.
The beliefs and institutions we prize most highly: the essential equality and “inalienable rights” of all human-beings; the primacy of reason and the scientific method over religious faith and “primitive” superstition; our democratic system of government, within which, alone, human equality and individual liberty, especially the freedom of expression, can hope to survive; all are the product of the West’s relatively brief (300 years) sojourn as global hegemon.
But all around us are signs that the era of Western hegemony is waning. Islam has become the vector of its decline – and we have no one to blame but ourselves.
From the First Crusade of 1096-99 to the Sykes-Picot “Agreement” of 1916, Westerners have disposed of the lands of Muslim peoples with breath-taking arrogance. The latter’s singular misfortune to live on top of the world’s most productive oil fields has only whetted the West’s appetite for domination. A resource which could have led to the flowering of a new golden age of Islamic civilisation has been sequestered for the United States and its allies by a vicious congeries of kleptomaniacal kings, sultans, emirs and military strongmen – all watched over by the garrison state of Israel.
Are we truly surprised that the West’s history of invasion, occupation and exploitation in Muslim lands has armed the most regressive and murderous interpreters of Mohammed’s message? What chance had moderation in the face of Western imperialism? Who else but the Wahabbists, Salafists and Jihadis were likely to benefit from the depredations of the Western powers?
While these extremists batter at the gates of the West: pronouncing fatwas on novelists, murdering artists and, as we have seen over the past fortnight, attacking US embassies and clamouring for the head of the film-maker responsible for the risible Innocence of Muslims; the cultural confidence of the West, its adherence to Enlightenment values, has already given way. Post-imperial guilt has given birth to the pernicious cultural relativism of post-modernism, and transformed the intellectual guardians of the West’s egalitarian and libertarian traditions into militant Islam’s fifth column.
Within the space of twenty years, the world will likely witness the ratification of a United Nations’ international convention, sponsored by the United States and its allies, outlawing the defamation and/or scandalising of the world’s faith communities. Once adopted by national legislatures, it will be a crime to write a novel like Salman Rushdie’s The Satanic Verses, or make a film like Martin Scorsese’s The Last Temptation of Christ.
Let this paraphrase of W. B. Yeats’ The Second Coming be Freedom of Expression’s epitaph:
The best lacked all conviction, while the worst
Were full of passionate intensity.
This essay was originally published in The Waikato Times, The Taranaki Daily News, The Timaru Herald, The Otago Daily Times and The Greymouth Star of Friday, 21 September 2012.
Posted by Chris Trotter at 15:19

"transformed the intellectual guardians of the West’s egalitarian and libertarian traditions into militant Islam’s fifth column."

I'm not sure you should make quite so much of Western traditions. After all they include Stalinism, Nazism, the persecution of homosexuals and black people, and discrimination against women. It's this assumption of superiority that rankles with Muslims as well. Perhaps you've read this?

Draco keeps referencing your essays:
imo, u are a very good writer

furthermore, it may be that they have to "tolerate" us :)

Really? It's the West's fault that the bulk of terrorist acts have Islamic elements. I'm getting fed up of other people implicitly apologising on my behalf for stuff we never did or was peformed in different times. Islam is not a Western creation and the violence and corruption of many "Islamic" societies is inherent and not a reaction to outside forces.

Any reasonable history of Islam shows violence throughout its history. It was born with an aggressive and not a tolerant theme. No fan of christianity but at least it promotes tolerance.

Certainly, the west has wheeled and dealed and dominated and mistreated but that in itself does not cause such a cultish approach.

Remember that many of these islamic countries are dictatorships that treat their own terribly and use religion as a tool.

It's not the 1st religion to be used for nefarious purposes but it's definitely the most common in modern times.

Bravo Chris. It seems the western internet is saturated with anti-muslim rhetoric, somehow inferring islam is an intrinsically intolerant and violent religion. Yet the comments from many westerners (have you seen the majority of comments on the Huffington Post?) shows equally intolerant and often violent views.

Many Muslims feel bullied by the west and feel their future and freedom are not within their control. And extremists can easily take advantage of this feeling to recruit disaffected youth. The same thing is happening with the rise of the BNP and other nationalist parties in Europe.

But the worst thing is that these extreme, polarised views are becoming more commonplace, and are even finding their way into governments. Unless tolerance can make a come back, it doesn't bode well for our future.

Ask the cathars about christian tolerance. Oh - forgot you can't - they were wiped out. Sometimes I think you should need a licence to have an opinion. Read some History.

Interesting essay, but you fail to discuss the problem of modern Muslims refusing to integate into the western societies they choose to move into. They seek not to integrate, but to supplant western culture with their own.

The Socialist doctrine of multi-culturalism has lead to the mass migration of Muslims into Europe will in turn lead to civil war in many countries.

Islam will only be tolerated up until the point that Europeans realise that they are in real danger of losing their countries to a global Islamic movement and then I fear we will see the likes of the holocaust again in Europe, but next time it will be the Muslims instead of the Jews.

Anders Breivik may have been mentally unstable and acting alone, but I believe his actions to be just the earliest beginnings of a violent backlash from Westernised Europeans.

"The Socialist doctrine of multi-culturalism has lead to the mass migration of Muslims into Europe"
Another one who needs a licence. Actually it's a shortage of labour and an ageing population that led to the migration of Muslims into Western Europe. Plus the geopolitical situation of it being difficult to migrate from eastern Europe until lately. The Socialist doctrine of multiculturalism only comes in after they have migrated.