"The Newsroom" - The Ideal And The Real

Journalistic Passion: Aaron Sorkin's The Newsroom presents television news and current affairs as it should be. But Sorkin, like all artists, draws his inspiration from reality. The fictional Will McAvoy's (above right) exploits follow very real historical precedents, and there are heroes every bit as idealistic in our own newsrooms.
THE FIRST SEASON of US screen-writer, Aaron Sorkin’s, The Newsroom has just ended. Like its predecessor, The West Wing, Mr Sorkin’s latest offering shows America as it should be by taking for its subject matter America as it is.
The question Mr Sorkin expect his viewers to ask at the end of every show is: “Why can’t real life be like this?”
Why, for example, can’t the producers of our nightly current affairs shows provide us with the sort of searing interrogation of newsmakers that the fictional viewers of News Night regularly witness?
Why have Television New Zealand and TV3 been unable to find an anchor-man like Will McAvoy, the strongly principled, fearsomely intelligent (yet politically conservative) journalist who heroically refuses to “dumb down” his show for the sake of the ratings?
Why, Mr Sorkin wants us to ask, are our own news-rooms not populated with the sort of young journalists who set News Night’s news-room afire with their idealism and an absolute determination to uncover and broadcast “the truth”?
And what about the characters Mr Sorkin places further up the hierarchy of his fictional Atlantis Cable News? What about Charlie Skinner, the president of ACN’s news division, or Leona Lansing, the CEO of the network’s parent corporation, Atlantis World Media? Without the backing of these two, neither Will McAvoy’s journalistic integrity, nor the crusading zeal of his “EP” (Executive Producer) McKenzie McHale, would ever make it to air. What about them?
It’s a formidable skill Mr Sorkin possesses; this ability to hold up the real against the ideal and make us rue how little the former resembles the latter. Why weren’t the all-too-real Bill Clinton, George W. Bush and Barack Obama more like Mr Sorkin’s fictional President, Jed Bartlett? Why can’t real journalists be as enthralling as News Night’s?
Well, as McKenzie McHale tells Will McAvoy in the pilot episode: “We could be”; “We were once”. Mr Sorkin’s hard-drinking, bow-tie wearing Charlie Skinner and the hard-nosed  Leona Lansing closely resemble the two pivotal characters in that greatest of all American news stories - Watergate. Not the two journalists, Bob Woodward and Carl Bernstein, who broke the story, but The Washington Post editor, Ben Bradlee, and the Post’s proprietor, Katie Graham. They were the ones who gave Woodward and Bernstein the time, the resources, and (most important of all) the backing, to tell the Watergate story. 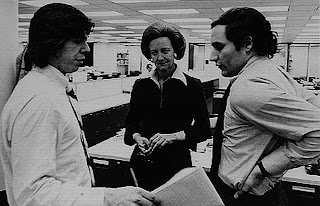 Real Life Heroes: Carl Bernstein, Katherine Graham and Bob Woodward discuss the Watergate expose in the newsroom of The Washington Post.
The sort of journalism Mr Sorkin champions in The Newsroom is possible. It has happened. It’s history.
Nor is it fanciful to claim that high principle, fearsome intelligence and conservative politics can be combined in a single news-man. I know they can, because I used to work for just such a person. His name was Warren Berryman and he was the founding editor of the weekly business newspaper, The Independent.
Warren loved free-market capitalism and he was the implacable foe of anyone who brought it into disrepute. What’s more, if you had “a good yarn”, Warren didn’t give a damn what your political leanings were. It was the story that mattered.
And though he may not always deliver the scintillating dialogue which Mr Sorkin puts into the mouth of Will McAvoy, our own John Campbell regularly presents TV3’s viewers with the sort of fearless advocacy journalism that makes The Newsroom such compelling viewing. Not forgetting Pip Keane, Campbell Live’s McKenzie McHale, or TV3’s very own Charlie Skinner: that indefatigable champion of his network’s news and current affairs; Mark Jennings.
It might be stretching a point to call them “young”, but the very real New Zealand investigative journalists, Nicky Hager and Jon Stephenson, are every bit as committed to uncovering the truth as News Night's idealistic staffers.
Elaborating the ideal; revealing its meaning and presence in our daily lives; this has always been the duty of the artist. But we should never forget the crucial role reality plays in shaping the artist’s vision of a better world.
Truth is not only stranger than fiction – it’s more inspiring.
This essay was originally published in The Dominion Post, The Waikato Times, The Taranaki Daily News, The Timaru Herald, The Otago Daily Times and The Greymouth Star of Friday, 26 October 2012.
Posted by Chris Trotter at 08:57

I note that Radiolive dropped Keith Stewart on Sat. nights. He was outspoken and didn't take any crap from rightwingers.

Perhaps that is why he got the chop!

Today on The Panel they are all straining their butts off about Aucklands rate rises..."why, why, why... Where did all this dept come from?". It appears the Savings Working Group report is forbidden reading or they would have read: "The policy choice that increased immigration – given the number of employers increasingly unable to pay First-World wages to the existing population and all the capital requirements that increasing populations involve .... etc"
Which goes to demonstrate that journalists have their own biases and pick and choose what the public "ought" to hear.

Sparky - dont worry, you still have Campbell, Sainsbury, Rachel and Duncan on your side

You're right. Newsroom and John Campbell have been like rare gleams of pure platinum in a dank barrel of rotting foxnews-inspired soundbite "nooz" and realiteevy cartoonatonix.

Truth from the mouths of the innocent; touching, evocative, inspiring.

Newsroom is the dreaded Antifox; slick, dramatic, with intense linguistic elegance and dedication to irrefutable fact. And Jane Fonda.

Which is why most of NZ has never heard of Newsroom.

Repetition of the latter fact - and his courageous committment to principle - is an arrow straight to the powerful chickenhearts, and has put JC on notice.

Prediction: either it or he will very soon disappear. And Newsroom will remain invisible.

Is it just me or are we getting more and more refusals to front up by ministers? At least on National radio.

Seriously; it's all about the control of popular media. They who control the media literally control the people.

Key and his Ministers have decided that Radio NZ is just a bad option because when they appear on the programmes, they are shown up for the folls they are ...so their policy is just to say NO to the public broadcaster - and at the same time continue to starve it of funds in what is nothing more than an ideological battle against perceived enemies of the right in the media.

They have such short memories .. do they not remember when THEY were in opposition and Radio NZ News was hammering the Clark governmnet day after day.

Public broacasting - its part of being in a modern democracy - but thats not what National want at all ...