Surviving Their Advisors: What Happens After Labour Wins? 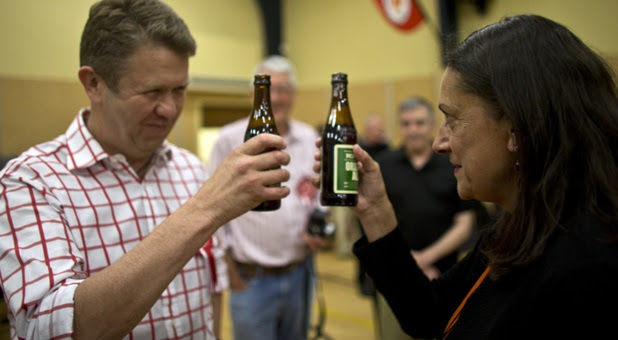 CHEERS! With Christchurch East in the bag, David Cunliffe needs to give increasing attention not only to winning in 2014, but also to how his government intends to establish a "Leftward and interventionist" administration in the teeth of extreme neoliberal opposition from an ideologically hostile civil service.
LABOUR PARTY MEMBERS and supporters are still celebrating Saturday’s decisive by-election victory in Christchurch East. With more than 60 percent of the votes cast, Poto Williams well-and-truly dispelled the nagging fear that National’s 2011 Party Vote advantage might preface a morale-sapping defeat.
For avoiding this outcome fulsome tribute must be paid to Ms William’s campaign manager, Jim Anderton. Few political operators can match Mr Anderton’s fighting skills in the trench warfare that is electorate politics. Among the most important of these is the ability to pre-identify your party’s supporters and make sure they cast a vote. Mr Anderton and his team did this with a thoroughness that National clearly could not match. Not even the low turnout (roughly 13,000 compared to 28,524 in 2011) could upset Mr Anderton’s calculations – indeed, the decisive result points to just how successfully his campaign team was able to mobilise the Labour vote.
If Labour is wise it will attempt to replicate Saturday’s mobilisation effort in Christchurch East across the entire country in 2014. In next year’s big battle, however, the prize will not be electorate seats (though they will be welcome!) but a clear plurality of the all-important Party Vote.
To that end, Labour’s leader, David Cunliffe, must assemble a policy package of sufficient power to dislodge the hundreds of thousands of disillusioned and/or despairing Non-Voters and propel them towards the polling booths. Psephological analysis of the 2011 General Election’s record-breaking abstention rate indicates that approximately 70 percent of the Non-Vote was drawn from demographic categories most likely to vote Labour.
To paraphrase Kevin Costner in Field of Dreams: “Build it [an authentic Labour manifesto] – and they will come [out and vote for it].”
And that, clearly, was the message Mr Cunliffe took from his party’s emphatic by-election victory. Ms Williams, he said, had formed  “a genuine connection” with the electorate’s voters. But, there was something more: “Our grassroots campaign in Christchurch East was run and won on the issues facing the city. On housing, insurance and standing up for people in the rebuild.”
According to Fairfax Media’s political correspondent, Vernon Small: “It all suggests Labour under Cunliffe see the by-election as a sign the party should press on even more strongly in the Leftward and interventionist direction it has taken so far.”
Brave intentions! But one of the biggest challenges facing a political leader striving to make the transition from Opposition Leader to Prime Minister is not only to be thinking constantly about how to win power, but also about how he is going to wield it once victory is achieved.
Sixty or so MPs, seated in the House of Representatives, may have the power to change the laws of the land, but the drafting and execution of those laws falls to a vast and highly complex bureaucracy which has, for the past 30 years, administered the state, managed the economy and generally guided society according to the widely accepted principles and practices of neoliberalism.
Over-riding these, of course, is the convention that civil servants must carry out the instructions of their political masters to the very best of their ability. That is not to say, however, that they will (or should) meekly receive those instructions without venturing an opinion concerning the desirability of the course of action proposed. Civil servants have a duty to provide their ministers with “free and frank” advice. A Labour-led Government determined to radically redirect the New Zealand state along “Leftward and interventionist” lines would be wise to anticipate a fair amount of “free and frank” resistance.
Mr Cunliffe, rejoicing in the democratic wind filling his sails following Saturday’s bracing victory, should be asking himself how many of the men and women likely to form his Cabinet possess the ideological confidence to stare down officials whose unanimous advice will almost certainly be that their party’s policy amounts to the purest folly, which, if implemented, will lead ineluctably to economic, fiscal and/or social disaster.
It’s an important question. Mounting a confident defence of “Leftward and interventionist” policies in the face of voluminous and coherently argued objections from one’s most senior policy advisers is no easy task. Mr Cunliffe should know that only a handful of Labour and Green MPs are even remotely capable of out-arguing neoliberalism. In New Zealand, the number of left-wing politicians with the foresight to cultivate and maintain strong relationships with policy specialists external to and independent of our neoliberal civil service is depressingly small.
With Christchurch East behind him, it will be interesting to see how aggressively Mr Cunliffe sets about developing and releasing the core policies of the next Labour-led Government. It’s a task that brooks no delay because if Labour and the Greens do not set their own policies before the election, then, most assuredly, their officials will do it for them afterwards.
This essay was originally published in The Press of Tuesday, 3 December 2013.
Posted by Chris Trotter at 08:02

There is a certain amount of BS in here Chris. Civil Servants fall over themselves to please their Ministers (I know I worked there for longer than I can recall). If there is any fault to find it would be that there is far to little "free and frank".

As Jim Anderton did such a magnificent job in Christchurch perhaps Cunliffe should get him back on board for the General Election.

"A Labour-led Government determined to radically redirect the New Zealand state along “Leftward and interventionist” lines..."

When has "interventionism" ever worked?

When has the "redistribution of wealth" ever worked?

If it DID work - if it were possible for Mrs Mary Beneficiary to live comfortably on a benefit (thanks to vast sums taken from the paypackets of others), then why on earth would she bother looking for work?
What incentive would there be?

Is it your view that "x" tens of thousands of people receiving benefits is "acceptable"?

I don't think that is good, either for those people or for the country as a whole.

We see the maximum extent of "interventionism" in Venezuela. Oh, what a success story *that* is! Not even their oil wealth can help them.

These are valid questions and I'll be interested to see your answers.
Thanks for your time.

Newsworthy pretty much nails it.
Both Treasury and SSC drive the "civil (occasionally) service".

The "Public Service" and
'Civil Service" are constantly bullied by both Treasury and SSC toconform to Ministerial edicts.

Both Public and Civil Servants are minions of Ministers (Hekia ParaTA has got rid of a few who did not toe her line. John Key has not done badly in the ditching (resignation) of others as well.

As that intellectual giant (I have been thinking (yeah right) richard prebble said public servants are eunuchs.

Thor. Poor boy. When has the "redistribution of wealth" ever worked? Apart from the fact that every Labour administration barring the Roger F-ing Horror Show has kicked gdp higher than the adjacent fiscally fashionable cunats, redistribution helps when you're young, when you're old and when you lose your job and stuff. Gee sorry.

And secondly Chris, I'm a public servant and Newsworthy and Peterpeasant are not really working too hard here (a bit Kafkaesque I know). I agree with you - there will be so many salary lines associated with the dirty pressure applied on any reconstructional moves should they come from anyone brave enough to break the quo.

When his redistribution ever work? It works all the time. Because there isn't a country in the world that doesn't redistribute wealth in some way. That's the job of the tax system. It works in Scandinavia, and in Germany, and for most of the EU. Tax has always redistributed well, often upwards, but these days not so much. A better question would be, "when has unregulated capitalism ever worked?" Because I doubt if there's ever been any.

Still up on the Norway Mountain Thor?

"When has "interventionism" ever worked?

When has the "redistribution of wealth" ever worked?"

"If it DID work - if it were possible for Mrs Mary Beneficiary to live comfortably on a benefit (thanks to vast sums taken from the paypackets of others), then why on earth would she bother looking for work?
What incentive would there be?"

Set up a job for Mary first. That's the best incentive.

"Is it your view that "x" tens of thousands of people receiving benefits is "acceptable"?"

So it's their fault that they are out of work? Was it the beneficiaries who caused the Recession?

"I don't think that is good, either for those people or for the country as a whole."

Forcing people to work for ever lower wages isn't good for the country or people either.

"We see the maximum extent of "interventionism" in Venezuela. Oh, what a success story *that* is! Not even their oil wealth can help them."

There is more to what is happening in Venezuela that meets the eye. It wouldn't be the first time the CIA has been involved in that country.

I suspect that the lack of oxygen up there is affecting your thinking Thor.