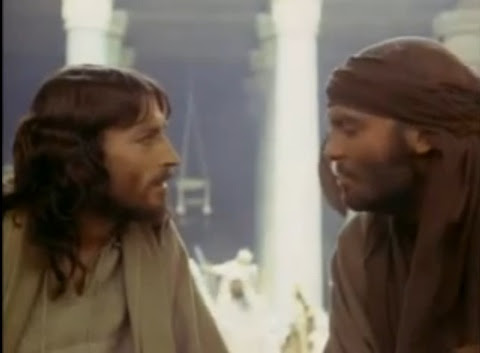 "All I know is that he died and I live. Maybe it’s what lies at the heart of that day."
“YOU’RE A HARD MAN TO FIND!”, exclaimed the sharp-featured young fellow, setting a jug of wine upon the table. “I’ve had no end of trouble tracking you down! Some said you were dead, others that you had been sold into slavery. But I said ‘No, the people who each played a part in Our Teacher’s last hours upon this earth must surely enjoy the Lord’s protection’, and here you are, safe and sound, in Alexandria!”
“Safe and sound, you say? Can a Jew ever be truly so? Still, there are many of us here, safe among the Greeks – if not the Romans. So, tell me, boy, what has brought you all the way from Judea – no, don’t look so surprised, your Greek is good, but I’d recognise that accent anywhere – what do you want with this old grey head?
“I want the memories inside it, Yeshua Bar Abbas. You were there the day he died. While they still live, I am recording the testimony of all who witnessed the events of that day.”
“The day who died, boy? I have seen many men die – and I have to warn you, I do not remember very much about any of them.”
“You will remember this man, Yeshua Bar Abbas. Even though it happened thirty years ago. He was called Yeshua, too. A Galilean. From Nazareth. A teacher and a healer who preached the coming of the Kingdom. He was put to death by Pontius Pilate. You were involved in some way.”
“Yeshua of Nazareth? Oh, yes, I remember him.”
“You met him? You knew Our Teacher? Tell me what happened.”
“The truth is, I don’t know. We were both being held in Pilate’s prison. I’d already been condemned as a rebel – was scheduled to be crucified in a few hours. I do remember that I was feeling pretty sorry for myself – pretty low. Then they brought him in. The guards laughed when they heard his name, insisted on introducing me to my namesake. They told me I should bow, because this fellow was the King of the Jews.”
“Did he speak to you?”
“He smiled. Shook his head. Spoke softly. ‘I am no king’, he said. We talked for a long time. He seemed to know a lot about me. About my attacks on the Roman columns protecting the tax collectors. About the plot to cut down the Emperor’s standard above the Temple. I asked him if he was one of us – one of the Zealots. He shrugged his shoulders. Told me that there would always be Caesars of one sort or another. The trick, he said, is to recognise what can safely be surrendered to earthly authority, and what cannot. Doing what you’re told, he said, is much less important than doing what is right. I remember snorting with derision at this meek little man and wondering what on earth he was doing among the real revolutionaries.”
“What happened then?”
“A Centurion came and took him up to meet Pilate. He wasn’t gone long. Then a message came down from the Governor to release the man called Yeshua. I wasn’t surprised – at least, not until someone hauled me up and struck-off my chains. The guard had changed, you see. I was the only Yeshua they recognised. I couldn’t believe my luck! But then I recalled the Galilean’s words about rendering unto Caesar what was Caesar’s and unto God what was God’s. I hesitated, was about to speak, but he was standing right in front of me, telling me with his eyes to remain silent. He leaned forward and whispered: “Go in peace, Barabbas. Some things belong both to Caesar and to God.”
“What? You’re telling me Our Teacher’s death was a mistake!”
“No. I don’t think it was a mistake. I don’t think that anything about Yeshua was mistaken. There was something unfolding in that prison, something beyond my understanding. All I know is that he died and I live. Maybe it’s what lies at the heart of that day. What’s your name, son?
But the young fellow was already gathering up his tablets and stylus. He looked angry.
“My name is Marcus, and I’m sorry I found you Yeshua Bar Abbas. The story you’ve told me cannot possibly be true. I pray the Lord sends me a better one.”
This posting is one of a series of representations of the Christian story carried on the Bowalley Road blogsite every Easter and Christmas.
Posted by Chris Trotter at 09:18

Very good story, explaining the gospel in a nutshell, it is still offensive to many.

Thanks Chris for the Easter tale. I am not religious but I do like you writing these Christianity based columns. I think it was Goethe who commented that any man who could not draw on the last six thousand years of culture is a poor man indeed.