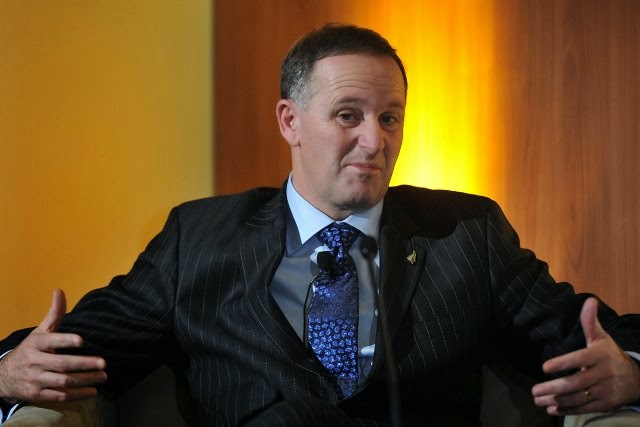 A Good idea - Or What? John Key's appointment of ten "free thinkers" to let him know what he doesn't know about national security is yet further proof of this Government's unwavering commitment to excellence in public relations.
FREE THINKERS! Wow! How very different this National Government is from its predecessors. Can anybody imagine Rob Muldoon appointing a group of “free thinkers” to help him identify the potential security risks confronting New Zealand in the 1980s? Crikey! Imagine what a group of “free thinkers” might have been able to do in relation to the Springbok Tour of 1981. I’ve said it once, and I’ll say it again: this is a National Government like no other!
So, who are these free thinking New Zealanders? And what mix of talent and experience has Prime Minister Key assembled among the ten members of his new Strategic Risk and Resilience Panel (SRRP). If the Panel’s main function is to “imagine the unimaginable” and to inform the Government of all the things that it doesn’t know it doesn’t know, then let’s take a look at what they bring to the table?
Let’s start at the top with Ian Fletcher, currently the head of the Government Communications Security Bureau (GCSB). I must confess that the man responsible for maintaining the security of government communications would not have been my first choice in the free thinking stakes. Indeed, the less free such a person is with his thoughts about such matters the better – I would have thought. But, maybe the PM knows something about Mr Fletcher’s job that the rest of have yet to be told?
Then there’s Sir Peter Gluckman, the Prime Minister’s Science Advisor. This looks like a better choice – although Sir Peter’s association with what some are calling an exercise in muzzling the Government’s scientist critics – people like Mike Joy – does rather militate against freedom of thought. Doesn’t it?
What about Therese Walsh? Well, as the Chief Executive of the 2015 Cricket World Cup, she clearly knows a great deal about the organisation of sports fixtures. Exactly how that knowledge might usefully contribute to “imagining the unimaginable” isn’t immediately obvious. Perhaps she’s learned the knack of envisaging what the rest of us simply can’t imagine: a consistently good New Zealand cricket team! That really would be a boost to our national security!
Karen Poutasi, head of the NZ Qualifications Authority, was obviously chosen to improve the quality of the nation’s spies. Who could question her ability to imagine a new and improved iteration of the New Zealand SIS agent? One whose culinary sights are set slightly higher than the ordinary meat pie, and for whom the contents of Penthouse magazine holds not the slightest interest.
And who better than Keith Turner, the chairman of Fisher & Paykel, to anticipate the dastardly plans of Islamic State engineers to adapt the electronics of his firm’s washing machines to some devastating new purpose? The potential threat to the nation’s delicates and coloureds is huge. We could be facing terror in every laundry; mayhem on every clothesline! Isis meets Elba is just too awful to contemplate.
Now, as everybody who watches Boardwalk Empire knows, when Al Capone was eventually brought down it was not by a Thompson sub-machine gun, but by the ineluctable laws of double-entry book-keeping. In this respect, panel member, Richard Forgan, from the global accounting firm PWC, clearly has much to contribute. Perhaps he’ll be able to have the Islamic State arrested for tax evasion?
Hugh Cowan sits on the Earthquake Commission. When it comes to imagining everything that can possibly go wrong, he’s a good man to have around. Hugh knows, from bitter experience, that what the government (and the rest of us) don’t know can be, quite literally, earth-shattering.
Lieutenant-General Rhys Jones, the former head of the NZ Defence Force, is already very good at imagining the unimaginable. He was, after all, able to imagine that New Zealand’s award-winning war correspondent, Jon Stephenson, might be foolish enough to jeopardise his international reputation by claiming he had been somewhere he hadn’t, and met someone he didn’t. That Lt-General Jones wasn’t able to go on imagining such nonsense indefinitely might be considered a weakness. But at least he has proved that imagining things that never happened is a crucial element of the NZDF’s skill-set – one that Lt-General Jones is now very well placed to pass on to his colleagues on the SRRP.
Helen Anderson is a director of Niwa, Branz and DNZ. In a world as festooned with abbreviations and acronyms as the “intelligence community” she should fit right in. Keeping one’s thinking free of unnecessary words and phrases can only improve the SRRP’s (which Ms Anderson must surely be referring to already as “Syrup's”?) overall effectiveness and efficiency.
Speaking of which, one can only applaud John Key’s appointment of Productivity Commission chairman, Murray Sherwin to Syrup’s distinguished membership. Ensuring that New Zealand gets more national security ‘bangs’ for its Treasury ‘bucks’ can only be a good thing. Can’t it?
So, there you have it. The Prime Minister’s free-thinking panel. Those of you who are disappointed that the SRRP does not include people like ‘New Zealander of the Year’, Dame Anne Salmond; investigative journalist, Nicky Hager; former Court of Appeal Justice, Sir Edmund Thomas; TPPA opponent, Professor Kane Kelsey; or that other tireless campaigner for our national sovereignty, CAFCA's Murray Horton; must understand that when John Key talks about “free thinkers”, he is not talking about those thinkers determined to keep us free.
This essay was posted simultaneously on The Daily Blog and Bowalley Road blogsites on Thursday, 6 November 2014.
Posted by Chris Trotter at 10:10

Just imagine Minto, you, me nutting out what actual threats may be? What a junket, that would be both seriously interesting and fun... albeit in association with other intel... but surely art and artists are worthy contenders... art being one of the only repositories of free thought left IMHO.

Whilst I'm distinctly unimpressed with John Key's list, I can't say I'm all that struck by yours either.

Where are the top-rung economists and where the foreign policy experts?

Where the China or Japan experts, where the Washington Beltway insiders (I don't mean Mike Moore), where the Middle East cognoscenti, where the demography buffs and where the top level environmentalists?

I agree that Jane Kelsey would be a useful addition and that Nicki Hager is a fine, decent person with some interesting insights to contribute. But where, just for example, is Paul Buchanan?

Who of us is truly a ‘free thinker’?

We all view life through a lens that has been shaped by our faith, or no faith, politics, friends, parents and culture.

Fascinating, not one proper expert on religious extremism, terrorism, and only one academic – the government's scientific poodle. Christ, years ago I did a thesis on terrorism – I'm more qualified than most of these people. Where is my cushy wee job?

It certainly is evidence -if it were needed, that your choice of experts depends on where you yourself stand. Whilst not all that impressed with John Key's panel, yours is much worse. Anne Salmond must be one of the most PC and racially correct people around-the fact that she seems to have picked up an award here and there and Nicky Hager-yeah right!

That is bread and butter,
That is how it goes down,
What is the goddam hold up???

What is with John pushing his wire tapping agenda???
Jihadis talk face to face for Operations. Not over the wire...

And his war in the Middle-east when we've got who knows how many ISIS fighters already operating with-in our borders???

How does stopping jihadis before they leave the country make Kiwis safer???

Talk about all over the show...

And let's not forget banning the fireworks...

‘Free Thinkers’ in any capacity imaginable via a ShonKey initiative is bwahahahaha laughable.

Your punchline snares it Chris.

Additional Lol–the old “pie and Penthouse” briefcase bungler take on the NZSIS still rightly refuses to be “aged off”!

Good post Chris, and quite funny at times. This is just a shoulder-tapping exercise for well-connected corporates. I see very little over-the-horizon perspectives amongst these "free thinkers."

At a minimum, if Key wants to stick with his corporate bias, he should select people from the insurance and credit rating industries that actually deal with issues of risk on a regular basis. He might then add in people from the intelligence and defense communities that are not tainted by their prior behaviour or overtly partisan orientation (unlike the disgraced Rhys-Jones or Mr. Fletcher).

That way at least the appearance of expertise can be maintained.

Thanks, Paul. And I should, of course, have included your good self among the free thinkers I would have appointed - had I been John Key!

Just remembered on my run today – I meant to say not one Muslim?

And this Chriss Trotter is why I think you should campaign to be god. Awesome you always bring out the good stuff and in media age where fluff is the word that's a rarity.