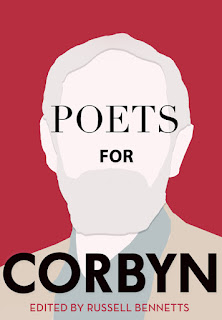 PENDANT PUBLISHING in the UK has published a free e-book of 19 poems, edited by Russell Bennetts, entitled Poets For Corbyn which celebrates the political phenomenon of Jeremy Corbyn and all the hopes he carries for the birth – or rebirth – of an authentic British Labour Party. I have reproduced here the contribution of Michael Rosen, a fellow historian, because it so succinctly captures the vacuity of Corbyn’s opponent’s arguments. The rest of the poems are available at http://www.berfrois.com/poets-for-corbyn/  Enjoy.
For Jeremy Corbyn

proclaiming the virtues of the
1000 year dynasty, the British monarchy;
advising us of the special qualities of a
non-elected second chamber
with its origins in Norman rule;
celebrating an economic system
that was developed and finessed
with the use of child labour around 1810;
continuing to solve international disputes
with the 10,000 year old method of
killing those you disagree with;
they tell us that socialism is outdated.


This posting is exclusive to Bowalley Road.
Posted by Chris Trotter at 22:03

A lovely piece of verse.

The day after I read of the death from pneumonia
of a two-year-old girl who lived with her family in a sub-standard state house
and which drew a comment from the Minister that people dying in winter of pneumonia and other illnesses is not new
I read how Housing NZ had paid an investment banker $1.6m
to help it sell off state houses
and read the same banker was in turn
for a fee
advising potential buyers of good buys.

The week before this I’d been told by a friend that a large block of farmland in Mangere
pretty rooted by proximity to the airport and the sewerage chemical treatment plant
had been bought up cheaply by Fletchers
just two months before the City Council announced new housing areas
of what they designated affordable houses ($600,000)
which of course included that land.

And then the week after the two-year-old girl died
and concerned agencies calculated the number of household heaters
sitting stashed away unused
power bills being what they are
a quarry worker died in a quarry collapse
and subsequent reports noted that the quarry had not been cleared as a safe workplace
but for some reason was allowed to continue to operate.

A statement from the CTU recorded that Australia
where the unions have won proper safety measures
has a rate of industrial mortalities half that of New Zealand’s.

And then last night on Maori TV
I saw a doco on Murupara
poor Murupara whacked over by Labour in the ’80s and National in the ’90s
and now with a rheumatoid arthritis rate amongst its young
of one in 39 compared to the national average one in 10,000.

You’d think all this would result in a mass-based full-on commo party
in cahoots with super-militant unions
threatening a general strike.
Instead National seems the party of the 99%

and I was talking to Hazel Armstrong at Pete Conway’s funeral
and she’s just been finishing off a report into why so few timber workers
like those left in Murupara who have a job and who suffer a criminal industrial death rate
want anything to do with unions.

There seems to be a feeling nothing can really be done about anything
except aspire.
Even the stamps I stick have advertisements upon them for Resene Paint
instead of kauri or fantail.
Strange times.
But this is how things are, here and now.

People's poet, is it really you?
Yes it is! And it'll be pretty angry for society when the kids get hold of it!

Can't think of anything more ghastly than political poetry. Tripley so when it's in praise of an currently active individual.

+
I am delighted to receive notice of this fine little work of literature. One of the poets included, I note, is based in this country. After reading your post, Chris, I got in touch with him, and we plan to meet later this week to have a talk about Corbyn. Thanks for initiating that.

The point is well made. Those of us who look back 35 years to a time before the neoliberal steamroller, are called old-fashioned - by people who want to return to the rough, unreconstructed capitalism of the 19th century.
But none of the mainstream journalists or commentariat point this out, even those who should know better regurgitate the 'old-fashioned' meme.

As opposed to fascist populism? Beloved of dictators :-).

Michael Foot was opposed to nuclear weapons. Different kettle of fish from pacificism (seeing as he was on a secret shortlist for a WWII suicide mission had the Nazis ever invaded - when Margaret Hilda Roberts was sheltering under Daddy's kitchen table - and seeing as he was an enthusiastic advocate for reclaiming the Falklands by force - a war started thanks to Thatcher's cuts to the navy, we're talking about the generation that knew about war first hand).

Hiding under Daddy's kitchen table seems quite a reasonable thing to do in an air raid, even if it's not in itself a qualification for high office. Personally, I'm quite glad I missed out on being a Luftwaffe target. The worst I had to put up with were the Provos' threats to the Northern Line.Being a Baby Boomer has had its advantages.

But, I agree. A government made up of, inter alia, Michael Foot, Denis Healey and Peter Shore would probably never have put Britain's hold on the Falklands in danger and would have been just as forceful as the Tories about regaining them.