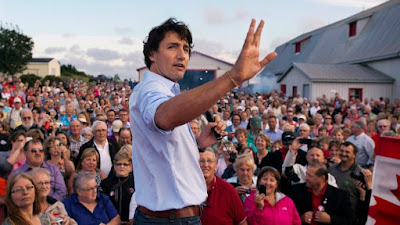 According to Vox, the niqab issue hurt the third-party in Québec, where they tend to be intensely secular, and turned anti-Harper voters to Trudeau. Seems a bit simplistic, but an interesting take. Personally I think people just got tired of austerity coupled with fundamentalist religion. Canadians tend to take their social/collective responsibilities quite seriously. And Canada was turning into a "not nice" place :-).

Justin Trudeau PM – The former schoolteacher has never been a minister in any Government, never held a portfolio, has promised to raise taxes and to take the country in to deficit to fund infrastructure projects.

What could possibly go wrong?

Michael Joseph Savage -a former brewer, had never been a Minister in any Government, never held a portfolio and promised to raise taxes and use the country's resources to fund infrastructure projects. - Experience and austerity do not equal success.

Trudeau was a risk taker, tax-infrastructure-jobs, he knew what he wanted, tax- infrastructure-jobs, he expressed himself well, tax-infrastructure-jobs. He got lucky but many are saying that he made his own luck. We have four people like that in NZ, John key, Shane Jones, Winston Peters and the other is unknown at this stage. My pick at the moment is David Seymour, he is head and shoulders above any-one in the Green and Labour parties and I know that his right-wing conviction could and probably will, in time, go hard centre with a largesse of risk, spend and emphatic communication. Don't laugh, he is capable and people are impressed, including media and political leaders. I do not know him and I do not support Act but I am impressed by him.

Maynard Keynesianism.
Page one. Borrow during recessions to spend on public works to stimulate growth.

Page two, when growth returns, stop borrowing and repay the debt to balance the books and have options for the next downturn.

Your piece has an almost religious tone Chris-interesting. Most New Zealanders forget the Canadian federal system - it won't be quite that easy. Above all the Canadians were fed up with Harper -not a great recipe for a new government. Things can change very quickly in their system.

Well Brendan, as opposed to Harper, who's never been anything other than a politician, and managed to score Canada a recession in the first quarter of 2015.

Could Trudeau do any worse?

Sorry, I should have said politician or politician's flunky. We need an edit function. Or I need to wake up

John Key PM – The former foreign exchange dealer had never been a minister in any Government, never held a portfolio, has promised to not raise taxes but did so anyway and to take the country in to deficit to fund infrastructure projects.
What could possibly go wrong?
Good point Brendan. History clearly shows that quite a lot could go wrong. Perhaps the difference between success and failure is that they serve different masters.

I am noting a sense of alarm amongst the rightie wingnuts! Heck, now there is a horrible Leftie School Teacher running Canada! Our resident clairvoyant gazer who claims to know the future, tells us that Corbyn would never make the Leader of the UK Labour and when he did would never win a UK general election. Or that a leftie Liberal would run Canada. The rise of parties like Podemos in Spain alarms them too. That will possibly put Leftie-commie-socialist bums on seats that the righties claim is theirs by right.

Trudeau's ideas are the right ones. Borrow or better still print the money to spend on infrastructure and then write off the printed money as the returns come back in. That spreads out into the general economy and the economy grows.

Impose Austerity and watch an economy shrink-- spend and watch it grow -- economics 101!

A new sort of economics - Practical Economics! Not esoteric economics which doesn't know it's place and tries to reshape philosophical beliefs and the highest reaches of the intellect and soul, to a degraded level that matches those of the perpetrators.

Perhaps Canada can now steer clear of those purveying systems to activate pavlovian responses to degrade people into those who worship money and possessions and bourgeoisie social norms. Canada needs to confiscate power tools that create computerised sharemarkets, zero contracts, 24/7 shopping, and industries and an economy based on exporting weapons to inflict injury of all sorts and continual war.