When Sinatra Was A Red! 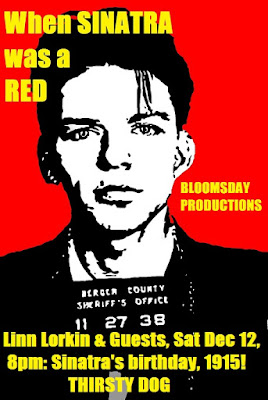 “FOR THE FIRST YEARS of his solo career, the early 1940s, Sinatra hadn’t recorded any material. There had been a strike called by the Musicians Union fighting for residual payments for recordings played on the radio. The strike lasted two years. Sinatra said, ‘I didn’t want to cross the lines.’
“The strike settled, he now recorded Saturday Night is the Loneliest Night of the Week, I’ll be Seeing You, When Your Lover Has Gone, These Foolish Things…
“The jazz magazine Downbeat wrote, ‘He said for the boys what they wanted to say. He said for the girls what they wanted to hear.’
“It was in the midst of this success that Sinatra decided openly to back Roosevelt and the Democrats in the 1944 Presidential election and to throw himself into the struggle against racism.
“Sinatra joined the Political Action Committee set up by the left-wing union federation, the Congress of Industrial Organisations, the CIO. The CIO was in a way the successor to the old Industrial Workers of the World, the Wobblies, who so influenced the revolutionary Red Federation of NZ in the early years of the 20th century.
“He gave money to the Roosevelt campaign, spoke at huge open-air rallies and broadcast pro-Roosevelt messages on the radio.
“The night Roosevelt won a fourth-term presidency, Sinatra and Orson Welles toured the bars of Manhattan and ended up celebrating at the headquarters of the clothing workers’ union, which shared the same building as the Communist Party…”
Today Sinatra is remembered as an entertainer who sided with Republican politicians like Nixon and Reagan, hung out with mobsters and swaggered about Las Vegas with his cronies singing, “I did it my way…”
But there was another side to Sinatra, an early radical Frank.  At the height of his popularity, in the 1940s, he was branded a Red, a commo—ol’ pinko eyes.
He was one of the first major stars of the era to stand shoulder to shoulder with the poor and the oppressed. Asked by a reporter in 1946 what he considered the biggest problem America faced in its post-war world he replied, “Poverty… Every kid in the world should have his quart of milk a day.” The great bandleader Duke Ellington remembered Sinatra in the 1940s as being the leader of the campaign against race hatred.
All of this, and all Sinatra’s great songs, will be remembered at Bloomsday Productions’ December show at the Thirsty Dog on Karangahape Road, Saturday night, December 12—the very day Sinatra was born in Hoboken, New Jersey, one hundred years ago in 1915.
A century later to the day, Linn Lorkin, Justin Horn, Hershal Herscher, Dave Powell and Stuart Grimshaw—the Auckland Frank Sinatra Big Band—will be celebrating Sinatra: “You Make Me Feel So Young”… “Old Devil Moon” … “One For My Baby, And One More For The Road” … and the Popular Front, the United Auto Workers’ sit-down strike in Michigan, the Westfield Freezing Workers’ stay-in strike in south Auckland…
Frank Sinatra, born Dec. 12, 1915, nine-time Grammy winner, died in 1998 at the age of 82.
Remembered by Linn Lorkin & Friends
Thirsty Dog, K Rd, Auckland.
TONIGHT, December 12th 2015, 8pm.
This posting is exclusive to Bowalley Road.
Posted by Chris Trotter at 13:45

No, Frank Sinatra was not a red ,he was a ordinary person, hog-tied to earning a living like most of us, except he could sing. For gigs and profile he mixed it with the underworld. He danced one foot in one foot out. He sang to a audience. He magnificently entertained. Life gave him earned lessons. Late in life he charged cash for each show.
I was saddened and are still saddened at his death.
Marvellous and uplifting to see bro Sinatra remembered.

Frank was always a left leaning Democrat (as opposed to the reactionary Dixiecrats) until the mid-60s. The big change was him being snubbed my the Kennedys. He went to being a Republican almost overnight. Even then he still kept a lot of liberal views. He deliberately supported Sammy Davis Jr, probably at some cost to his career. He also helped a lot of charities. This from a man who thought nothing of hitting women and hanging out with the Mafia. He was a mass of contradictions.
People can like the man's music without endorsing his behavior.

He was certainly a mass of contradictions and, yes, he did help promote the career of the even more talented Sammy Davis Jnr. But, in 1960, he told Sam to abandon his courting of Mai Britt until after the election as it might impact adversely on Kennedy's campaign. And Sam did as he was told.

I think Anonymous@20.31 is correct. Despite his extraordinary talent, Sinatra was an ordinary guy from an ethnic area in Hoboken,NJ. In the 1930s and 40s that would have made him a natural Democrat.

But, as working class white America moved out of the old ethnic neighbourhoods to the suburbs, as mass affluence took over and as Frank himself grew rich, he, like so many of his contemporaries, edged rightwards, a process cemented by the inter-generational culture wars of the late 60s and 70s.

Yet not every hyper-talented Italian American from the old neighbourhoods behaved similarly. Whilst Frank was staring to hobnob with the Reagans, Tony Bennett was on the bridge at Selma:

Yesterday, Bennett went online with some very generous and appreciative comments about Sinatra. But I think their generosity tells us more of the guy making them than of the man they're ostensibly about.

Even so (and despite his vast personal failings), Frank was a great artist and, to my mind, at his best when he ceased being the hungry-looking young man with the voice of an angel and became the joyously cynical hipster, with the hair implant, perfect timing and textured, layered tones of middle age. May he rest in peace.

Here he is playing squire/court jester to the 'First Lady of Song' herself. Enjoy!

I heard Frank hated "My way" and the Randian statement therein. At heart I think he was a good person.

Thanks to all the commenters for your individual views and memories. Rounds the picture.

And Chris were you able to attend? Was there a good crowd? I would bet it was a great night.

I'm not sure it was ideological.

I suspect he hated that song because it was truly awful, both musically and in terms of the quality of its lyrics.

This was a guy who had cut his teeth on the Gershwins, Cole Porter, Rogers & Hart, Harold Arlen, Hoagy Carmichael, Sammy Cahn/Jimmy van Heusen et al.....every one of them an absolute master of their genre.

But, as he and his audience grew older, what they always seemed to want to hear was the most turgid, lack-lustre and tired item he had ever recorded. It was as if the punters were recreating Francis Albert in their own worst image; tired out, flatulent, self-congratulatory, a mite bitter and with all passion spent.

He'd had many a Randian moment earlier on ....but with vim, energy and style, e.g. : https://www.youtube.com/watch?v=T-J_ekj7CDw

Seems there is almost no one that the left won't use after they are dead for their own devious political ends. I guess they are not around to say what crap it is.

"what crap it is."
Evidence?? Not that I really care mind. My MOTHER liked Frank Sinatra.

Anyway, it just occurred to me that the extreme right seems to have Eric Clapton. He's a Kipper. Sad that. But there you go jigsaw, you lot have got a real musician :-).

I didn't know Eric was now a Kipper.

Couldn't you have kept quiet about it?

Why spoil my enjoyment?

You haven't been paying attention Victor. Chris wrote something about Eric some months ago and I mentioned it then :-). I must say, it pains me.

Who's Eric Clapton for god's sake? Certainly not someone to be mentioned in the same breath as Sinatra. Seems that world is divided for you Gorilla Sturgeon but then that's to be expected with your ego I guess.....I have no doubt that you will find others who are dead to use as hooks to hang your left wing nastiness on. The fact that they can't answer back doesn't deter you.

I see you're right into the spirit of Christmas jigsaw. And Clapton is perfectly capable of answering back, because he still alive. You can hear him railing about the blacks and so on, on you tube I do believe. You can also see Sinatra there :-).

Although I pay you considerable attention, it's fair to say that I don't invariably hang on your every word.

I suspect, though, that you're sufficiently robust to cope with this. Please don't go all weepy on us.

Er... Clapton being a kipper pains me Victor, not you refusing to hang on my every word :-). No one is done that since my son was very young. Apparently people used to think he had reformed, because he didn't say much after the original rant in or around 1978. But he's repeated it several times in the last 10 years or so. Sad really, because I really like his music.

I suppose I'll have to apply my Wagner rule.

This states that you should only be put off someone's music by their ideas, if those ideas are somehow integral to the music.

Wagner rule. That's probably good enough for me – thanks Victor – and a Merry Xmas to you.