Winston Peters Has Options - Jacinda Ardern Does Not. 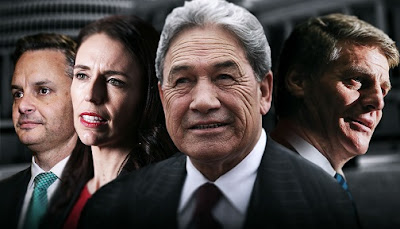 Clowns To The Left Of Me, Jokers To The Right: Winston Peters with his crucial nine NZ First seats can make or break the fortunes of both major parties. Jacinda Ardern, on the other hand, cannot lose Winston's support without losing office. It would, therefore, be prudent for Labour to honour the promises that secured them the Treasury Benches.

JACINDA ARDERN needs to get a whole lot smarter – and quickly. Or Bill English might stop behaving like the dimmer half of Dumb and Dumber and start thinking strategically. The object of all this clever, strategic thinking? Winston Peters.

The Prime Minister’s frantic attempts to keep the “annex” to the Labour-NZ First coalition agreement secret, suggests strongly that the rumours about the post-election negotiations are true. Labour, it is said, could not believe the radicalism of the changes Winston Peters and his fellow negotiators were seeking. Unwilling to jeopardise their chances of ultimate victory, Labour’s negotiating team were, accordingly, careful to shunt NZ First’s most radical policy propositions into the now notorious annex.

Describing these as mere “notes”, the Prime Minister is flatly refusing to acknowledge the annex as official information. The moment NZ First’s nice-to-haves become official government policy, she reassures us, they will be made public. Until then, however, the sheer scale of NZ First’s policy ambitions will remain under wraps.

What must Peters be making of all this fancy prime-ministerial footwork?

It’s hard to see him being anything other than aggrieved and alarmed. Is this how Capitalism is to be given a human face? By falling back on the secrecy and manipulation of the Clark years? God knows, there are enough of Helen’s old comrades cluttering-up the Beehive lift-wells as it is! Do they really expect him to abandon his stated preference for “change” over “a modified status quo” before he’s even had time to hang up so much as a single Christmas stocking?

Peters is by no means the first political observer to note just how completely the “Jacinda-Train” has been stripped of its radical political signage. What had looked to many like a replica of Trotsky’s legendary armoured train; a vehicle for carrying the revolution forward against all enemies; has taken on the appearance of a drab KiwiRail locomotive in the process of being rotated 180 degrees on the Wellington turn-table.

This is not what Peters and his party threw in their lot with Labour and the Greens to achieve. Clarks “glacial incrementalism” is not the stuff of which political legacies are made. As he stood beside the young prime minister in the Beehive Theatrette on Monday afternoon, is it possible that Peters was beginning to feel, ever-so-slightly, foolish? Was he wondering whether, somehow, the old grand-master of the political chess-game was being checked?

Had he and his colleagues not been so busy forwarding thousands of written parliamentary questions to the Clerk’s Office, Bill English might have registered just how taut the hawsers holding the Labour and NZ First ships together have become. He might have asked himself what the Prime Minister’s refusal to come clean about all the policy concessions NZ First had demanded, and Labour had nodded through, portended for the Coalition’s long-term prospects. He might have concluded that “a [barely] modified status quo” is the very best NZ First can hope for. He might have thought to himself: “But, National can offer that!”

Indeed, it can. Which is why the Prime Minister needs to rein-in all those lofty Labour condescenders who have plonked themselves down at the coalition table and started explaining the facts of political life to their NZ First and Green Party allies. Most of all, she needs to ban absolutely any further references to Steve Maharey’s infamous quote dismissing political promises as “the sort of thing you say in Opposition, and then forget about in Government”.

Winston Peters had every reason to give the National Party a wide berth in the aftermath of the 2017 general election. Even so, he would never have joined forces with Labour had he not been assured of the policy space necessary to construct an enduring political legacy.

If English senses that Labour is denying the NZ First leader his promised policies of change, then what’s to stop him offering Peters an alternative legacy? By setting-up NZ First as its sister-party in provincial New Zealand, National could avoid becoming “Johnny-No-Mates”: New Zealand’s largest party, but never able to win enough seats to form a government. If English can convince him to become National’s provincial partner, then Peters will be able to bestow upon his beloved NZ First Party the precious legacy of permanence.

Time to smarten-up Jacinda! Give Winston the policies he was promised.

This essay was originally published in The Waikato Times, The Taranaki Daily News, The Timaru Herald, The Otago Daily Times and The Greymouth Star of Friday, 1 December 2017.
Posted by Chris Trotter at 10:44

Slipping back to old habits Chris.

Are these the coalition demands Winnie is after I wonder...secret coalition agreement: https://pbs.twimg.com/media/DP2oIn3UIAAtkdv.jpg

Chris,
Absolutely well said.
New Zealand deserves a open and honest coalition government, not to be open and honest with NZ's future is a risky and dangerous path for this coalition.
I believe that Winnie will, or has already taken a lot more political muscle than what his 8 percent vote should deserve.
Secrecy is festering poison.
Winnie would probably want to talk to New Zealand about his policies and forwardness to our future.
Is he being muzzled?.
Secrecy can destroy.
Secrecy can be breached.

peter petterson
I don't think that should be regarded as a satisfactory comment from a regular commenter. Explain yourself a little, this isn't a teacher's opportunity to mark a report card. What old habits, and why should they be regarded as reprehensible? Just a few sentences should be enough to show us the breadth of your mind.

As a rightie, I love your blog, you by far have the most sensible views on the left, most of the time!

I might not be up with the play here quite, but Winston always seems to have a pretty wide grin on his face these days.
I think he and Jacinda might have a closer understanding and policy compatibility than Jacinda has with some of her senior labour party colleagues . He will understand the spot she is in if this is the case.
What fun!
D J S

I suspect Chris, that Peters has more ambition than just seeking a party legacy.

If what came out today is correct he is primed to take over the PM role upon Ardern resigning.

Reminds me of the period drama 'Reign'.

Whereupon Queen Mary of Scots married the son of the King of France, a secret clause was inserted in their marriage contract whereby if she became deceased before producing an heir then the Kingdom of Scotland became forfeit to France.

As such, her fragility of life became so much more the fragile - understandably once she is aware of this secret clause she becomes most unhappy and works to have it annulled.

I suspect that Ardern needs to be careful that Peters doesn't become the smiling assassin that Key was always accused of being.

Nothing like flying a kite to see which way the wind blows, but a Zeppelin is a bit over the top.

I think you are on the right track Chris. Peters wants certain significant changes that the PM may not want to provide, and he does not want others she wants. It's going to get messier than it already is. Read the list of back downs in the NBR last Friday? It's very long. Indeed almost every policy she got votes for is compromised or wiped.

Peters would like to have his baby become the Country Party and keep National led government 'his type' of conservative. Because under Key National was not conservative really, yet that is partly why it was such a roaring success. Peters was very annoyed by that success and popularity. Indeed he was envious & spiteful, as is his character.
So thank heavens English refused to give him what he wants but you are right, he may just try again and English may just give him enough in due course.
I predict that at some point, the PM will ruffle his feathers one too many times and he will cause her ambiguous & confused coalition to blow up.