The Theory And Practice Of Plausible Deniability. 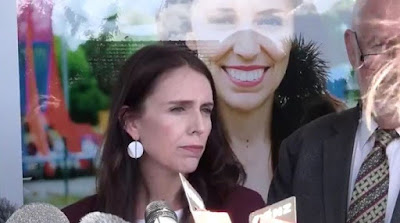 Nothing To Smile About: Was it the need to give the Prime Minister "plausible deniability" that prompted Andrew Kirton to keep Jacinda Ardern out of the loop? Acutely aware of her unblemished political reputation, was it his judgement that the delicate questions arising out of the summer school scandal were better dealt with in places where the Prime Minister was never present?

WHY HASN’T ANDREW KIRTON been sacked? By any common-sense definition of accountability, the actions of the Labour Party’s General Secretary offer ample justification for dismissal. Upon learning of the youth wing of the Labour Party’s failure to keep four young people in its care safe, he decided not to alert their parents; not to alert the Police; and not to alert the leader of his party: The Prime Minister, Jacinda Ardern. Surely, at this stage of the scandal, Kirton should be shorter by a head? Why isn’t he?

To understand why the Prime Minister has so far spared her party’s General Secretary, it is necessary to frame a counter-factual account of the incident.

It’s the morning after the party at which four young people have been sexually assaulted or harassed by a 20-year-old attendee at Labour’s 2018 Summer School. The Young Labour organisers have contacted both the Party President and the General Secretary seeking advice about how they should proceed. Andrew Kirton tells them he’s on his way to Waihi and instructs them to do nothing until he arrives. His next call is to the Prime Minister’s Chief-of-Staff, Mike Munro. Having established as clear a picture of the incident as possible, Munro contacts Jacinda Ardern. A small crisis-team is formed to determine the best way of dealing with what is clearly a serious and potentially very damaging incident.

And, therein lies the problem. The number of people involved in an event of this kind begins to grow exponentially the moment state officials become involved. What’s more, every discussion entered into and every decision made by state officials is subject to public discovery under the Official Information Act. (Significantly, decisions made by the senior officials of a private political organisation, such as the New Zealand Labour Party, fall outside the scope of the OIA.)

Cold political logic would, therefore, dictate that the Prime Minister should be kept in ignorance of such an event for as long as possible. That way, when the story breaks (and in a democratic state, with a free media, the story will always break) she can say – hand on heart – that this is the first she has heard about it. The Prime Minister will have, in the value-free vocabulary of statecraft: “plausible deniability”.

“Plausible Deniability” may be defined as:

“A condition in which a subject can safely and believably deny knowledge of any particular truth that may exist because the subject has been deliberately kept unaware of said truth in order to benefit or shield the subject from any responsibility attached to the knowledge of such truth.”

The first explicit use of the concept may be traced back to the Central Intelligence Agency, whose first Director, Allen Dulles, emphasised the importance of protecting the government of the United States from the consequences of failed agency operations by ensuring its officials are able to offer the American public a “plausible denial”.

As the Wikipedia entry on Plausible Deniability helpfully points out, however, the idea has been around for a lot longer than the CIA:

“[I]n the 19th century, Charles Babbage described the importance of having ‘a few simply honest men’ on a committee who could be temporarily removed from the deliberations when ‘a peculiarly delicate question arises’ so that one of them could ‘declare truly, if necessary, that he never was present at any meeting at which even a questionable course had been proposed’.”

Was this the sort of thinking that prompted Andrew Kirton to keep the Prime Minister out of the loop? Acutely aware of her unblemished political reputation, was it his judgement that the “peculiarly delicate questions” arising out of the summer school scandal, were better dealt with in a setting where the Prime Minister “never was present”.

If the matter could be resolved out of the public spotlight – all well and good. The Party would have dodged some potentially very harmful bullets. If the news media ended-up getting hold of the story – well then, at least none of the bullets would hit the Prime Minister.

This interpretation of events had clearly occurred to senior NZ Herald political journalist, Claire Trevett, as she was summing up the state-of-play of the summer school scandal on 15 March:

“It may have been accidental, but the worker bees [protecting their Queen in the Beehive] have done their job because ‘political management’ was also the only reason not to tell Ardern. Her lack of knowledge now means she does not carry the blame for the initial clumsy handling of it. Ardern is also free from any claims of a cover-up. It is Andrew Kirton who is the worker bee paying the price for his Queen. He fronted on it and it was he who dealt with – or at least made the decision to let Young Labour deal with it without sufficient oversight – after the event.”

And that, almost certainly, is why the Queen in the Beehive is not shouting “Off with his head!” Or, at least – not yet.

This essay was originally posted on The Daily Blog of Friday, 16 March 2018.
Posted by Chris Trotter at 11:14

Er... "He" decided not to inform the parents? We don't know actually, it may have been the victims themselves who decided their parents were not to be informed, as is their right if they are over 16. And we don't know anything about why the victims may have not wanted their parents informed. Given the reactions of some fundagelical parents, I think I would be a little bit wary of allowing the Labour Party to inform them if I was a victim. But again, we don't know – my trolling through the various news sites has not necessarily been thorough but if anyone does have any information on why their parents weren't informed, perhaps they should come out with it. If heads should roll, it's because they let young people get absolutely pest, and the Prime Minister wasn't informed. She should have been informed as a minimum, simply because it would presumably safeguard her from being ambushed by the press about it.

I prefer Jacinda Arderns attitude in developing a better way of doing politics. Quite frankly this whole episode smells of a rat in a blue coat. It should all come out eventually.

The PM may have been handed a poisoned chalice by Andrew Kirton. She may not be at all grateful to him for withholding information and so protecting her. If I was her I would feel like kicking him out soon, but she will have to think of the practicalities - what is the cost/benefit effect of that.

Martyn Bradbury at The Daily Blog of 18 March 2018 shows a tweet about this matter dated the 12th, the day after 'The Party', alluding to a 'sex scandal' likely to erupt. Bradbury also thinks that the PM should definitely have been told about it. Among considerations he says; Let’s put aside telling every voting parent in NZ that Labour wouldn’t tell them if their kid was abused at an official Labour Party function.

https://thedailyblog.co.nz/2018/03/18/how-did-a-far-right-attack-troll-know-about-the-labour-party-summer-camp-scandal-24-hours-after-it-happened/
How did far Right Troll know about this 24 hours after it happened?
‘Kermy’ is a far right Twitter Troll who joined Twitter in January 2017. They are an exceptionally toxic individual and yet 24 hours after the Summer Camp event, ‘Kermy’ seemed to know everything about the Labour Camp scandal…

(See link and below.)
…how did a far right Troll know about this scandal before anyone else in the Labour Party hierarchy?

I have typed out the contents of this tweet for your information.
This is from:
Kermy @ferttman
Let's not forget the looming sex scandal coming soon from the
Labour camp. Will make Darren Hughes look like a fairy tale...
Hang on to your steak and cheese peeps!!!
1.33pm 12/2/2018

There appears to be a very blue cheesy smell from this matter. When we have Cambridge Analytica and crooning cronies Crosby & Textor to contend with then the left needs good practices and management of political affairs.

Here is a little bit of sweet music - one of Janis Ian's: 'Would you like to learn to sing, would you like to sing my song'. Could be one that C&T play when they have their G&T.
https://www.youtube.com/watch?v=3dyFBdhh3FE