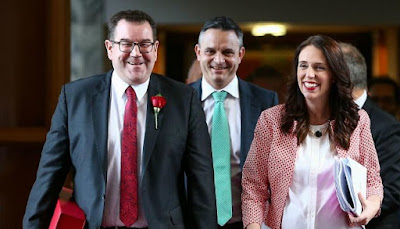 THE WINTER OF DISCONTENT was an astonishingly successful bluff executed by the business community against Helen Clark’s government in May 2000. The bluff itself came in three parts. Part One was an all-out effort to undermine international confidence in the strength of the New Zealand dollar. Part Two called for the business community’s leading media allies to begin undermining middle-class confidence in the Clark-Anderton Government. Part Three required New Zealand’s leading businesses to issue Prime Minister Clark and her Finance Minister, Michael Cullen, with an “Investment Strike” notice. If the radical elements of the Labour-Alliance Government’s legislative programme weren’t shelved immediately, then business leaders would simply “put away their cheque-books” and the economy would stall.

Clark and Cullen, unwilling to call the business community’s bluff, capitulated almost immediately. Anderton was required to break the bad news to the Alliance caucus. Its plans to extract some of the neoliberal order’s sharpest teeth would have to be put on hold … indefinitely. Clark publicly declared that the paid parental leave provisions put forward by the Alliance’s Laila Harré would be enacted “over her dead body”. On 23 May 2000, Cullen told the Wellington Chamber of Commerce: “I am mindful that the previous government allowed itself to become disconnected from the electorate and out of touch with public opinion. It stopped listening and paid the political price for that at the last elections. I am determined that we shall not make the same mistake.”

The questions which Cullen either did not want or never thought to ask were: from which part of the electorate did Jenny Shipley’s turncoat government become disconnected; and whose opinions did they disregard?

The National-led government was not voted out of office in 1999 by New Zealand’s business elites. It lost power after nine years of vicious assaults upon trade unionists, beneficiaries, state house tenants, university students and just about every other sector group unlucky enough to be in a client relationship with the state. These were the New Zealanders who voted for Labour, the Alliance and the Greens in 1999. Tragically, they were also the Kiwis who Clark and Cullen abandoned just six months later when confronted with the business community’s bold political bluff: its point-blank refusal to accept the policy consequences of the Right’s electoral defeat.

Eighteen years later, a Labour-led government filled with friends, admirers and proteges of the Clark-Cullen era have gone one better than their easily-overawed political mentors by capitulating pre-emptively to the business community. The Budget Responsibility Rules, formulated by Labour’s Grant Robertson and signed-up to by the Greens’ James Shaw in March 2017, sent a strong signal to New Zealand’s business elites that no matter how much stardust got thrown about during the general election campaign, no repeat of the Winter of Discontent would be necessary. Grant Robertson’s dutiful and fiscally timid first budget has furnished New Zealand business leaders with all the proof they could possibly need that neoliberalism’s sharpest teeth are all perfectly safe.

The most effective bluff in politics isn’t the one your opponents are too gutless to call, it’s the one you no longer even have to make.

This essay was originally posted on The Daily Blog of Tuesday, 22 May 2018.

Chris
You will need to stop grinding your teeth. There is so much to cause that but our politics will take its toll, with small rewards, and the subject will roll on leaving you toothless and gummy. What a dreadful thought. But you are fiving good stuff to chew over ourselves. Beats watching the pageant on television; and a glance at that, a read of your and other critiques of the happenings and pronouncements and prophesies about directions, plus a quick glance at Yes Minister clips or a dip into the book of the script, gives a very rounded experience.

I was out running the other day and heard Grant Robertson being interviewed on national radio. He ducked and weaved like Mohammed Ali at his best. And to her credit,Kathryn Ryan did ask him some of the hard questions. Seems to me that Helen Clark under promised and over delivered in this government is doing exactly the opposite. I notice the extra money for heating their houses of the aged is now out the window, among other things. And they haven't even got the excuse of "Opening the books". God help us, I can't remember the last time a government actually kept all the promises it made during the election campaign. And I'm pretty damned old.

Political parties have to make promises to get elected while govts get ousted on broken promises, poor performance and electorate boredom. Key turned politics into the reality show of political smoke and mirrors that continues to be played out via a compliant media today. If you want a govt made up of parties that don't have to make promises they can't keep then you better change the political and electoral system. The media will require more than a few laxatives and the general electorate to be better educated on matters of state. Best of luck with that.

...and the alternative Chris?...Politics as you should well remember "is the art of the possible"

Listening Matthew Hooten on Radionz oozing satisfaction was galling.
He said a number of times that National would have done the same implying that really we were playing silly games voting out such a good responsible financially successful government and that it had left everything so nicely situated that this budget was the easiest one ever formulated. It is a disgrace, and lacks integrity that National Party people still go on in this vein despite the fails from their regime on so many fronts, and having only achieved a sirplus by cutting down on welfare and public services; the idea that is the wet dream of all RWs, men and women!

Can the people sue their government if they don't comply with constitutional and legal requirements - or on the basis that under the Fair Trading Act, they are not fit for purpose, and furthermore have held themselves out to be proficient and able and have left the people of the country in a condition like a dog's breakfast?
Is it an impeachable matter m'lud?

Not too hard to discern the strategy and motivation of the "Labour government" at this juncture;and this is collecting at the win window in the 2020 election. Or " do not scare the horses".
Contrast all the colour, excitement and pageantry in the lead up to the 2017 election and this offering of weak politcal gruel, bereft of visible reform and action at ground level. This will only spell defeat for Ms Ardern.
If the populace sense a lack of sufficient "movement at the station" to borrow the words of Australian bush poet Banjo Patterson; then Labour will get short-shift at the polls in 2020.

The battler's don't really expect much from the Beehive in real terms, but they do expect more than mealy-mouthed poltical rhetoric from Labour. In short get on with doing something tangible. And lest we also remind ourselves departing for Australia is not any longer for those on strugglexstreet.
No land of plety here anymore.

In short What is needed is to weigh into using the government trying to fix everything ... and now if not sooner!!!

Richard
I think you are right that "The battler's don't really expect much from the Beehive in real terms". I think that most people in need would just be grateful for small help now, with surety of progression each Budget, and just having grass roots help would lift them up where many of them have never been lifted before. The young ones have had inter-generational decline under the powerful presence of negative-gearing, leverage, staff-shedding, low-inflation-low-wages under neolib-freemarket-little regulation-laissez faire from all directions.

It is illustrative that Goff has a secretive plan prepared for waterfront stadium costing apparently $900,000 for the report research. A commentator explained that as resulting from him coming recently from central government and not knowing how local government worked!! (Heard on radionz news somewhere.)
This is the big picture planning. The planners who like the elegantly presented plan which takes time, view the recipients of their work from an objective distance.

Aucklanders in need of housing now could be asked to come forward if they would like and fit into a tiny house, with one or two children or a family boarder, as tenants and have testimonials on reliability also for the boarder. These could be grouped around central piping, electricity, sewerage giving efficient service costs, and near transport to job places. But no it's all about $650,000 'affordable' houses.

When the top banana can spend $900,000 on research into an idea to impress wealthy citizens and tourists, you know that practicality and kindness have vanished from the brains of the elite, and their amygdala, where the emotions lie, has atrophied.

These are the vanguard of the replicants who will be used by the super-wealthy for decision making more and more because it is hard to engage with a machine. It can't be accused of being immoral, or derelict in its duty, or failing to fulfil responsibility to fellow citizens. It can be programmed to smile, be affable, to turn criticism with some stock phrases, to never answer a question directly, to change the line of questioning, to turn the question back on the interviewer. Pollie-like! John Key like?