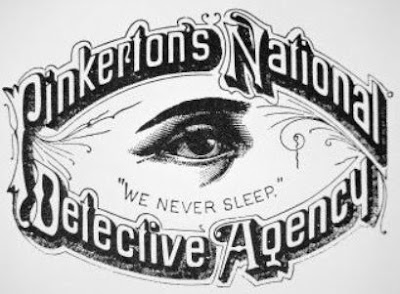 The All-Seeing (Private) Eye: When it comes to protecting private property the trick lies in learning how to undermine the legal protections guaranteed to those attempting to modify property relations, while taking full advantage of the protections guaranteed to property owners. The ideal mechanism for giving effect to these contradictory objectives is the private detective agency.

The core function of the modern state is the facilitation of private wealth-creation. The so-called “rule of law” is critical to this function. In the absence of a reliable legal system the protection of private property reduces swiftly to the application of brute force – a most unreliable servant and an even worse master.

Making the rule of law one of capitalism’s central talismans, however, means extending the law’s equal protection to the system’s enemies as well as its friends. When it comes to protecting private property, therefore, the trick lies in learning how to undermine the legal protections guaranteed to those attempting to modify property relations, while taking full advantage of the protections guaranteed to property owners.

The private detective agency is the ideal mechanism for giving effect to these contradictory objectives. It is no accident that the first and most famous of these, Pinkerton’s National Detective Agency, was founded in the United States in 1855. The big industrial capitalists of the era were only just becoming aware of their need to be protected from their own employees, who were, similarly, just becoming aware of the need to protect themselves in trade unions.

Allan Pinkerton, a Scotsman, offered his services to these captains of industry. His spies would provide them with intelligence about who their employees were listening to and what was being planned. If worse came to worst and a strike broke out, Pinkerton also offered to organise strike-breakers and provide them with armed protection.

As the Pinkerton agency grew in size and strength it found itself providing intelligence and muscle not just to private industry, but also to the federal government of the United States. In 1860 the “Pinks” as they were called, foiled a plot to assassinate the President-Elect Abraham Lincoln and were immediately hired as his bodyguards for the duration of the Civil War.

For the next 50 years, the Pinkertons would occupy that shadowy territory between the lawful and the unlawful. Their principal value lay in their ability to do what was necessary in such a fashion that their actions could not be attributed directly to either big business or the state. In carrying out their employers’ dirty-work, however, the Pinkertons were forced to descend deeper and deeper into the criminal underworld. It was in no one’s interests to ask too closely how the trade union organiser fell into the ravine, or who was responsible for beating the muck-raking journalist senseless.

As the federal government expanded, the work formerly contracted out to the Pinkertons was taken in-house. The “Pinks” were replaced by the “G-men” of the FBI, the Secret Service and the CIA. The need for “the work”, however, never ceased. Keeping left-wing dissidents and activists under surveillance; intercepting and reading their mail; sowing suspicion and discord in their organisations – such services were always in high demand.

As the rapidly emerging picture of TCIL’s activities in New Zealand makes clear, when the official organs of law enforcement and national security find themselves lacking the human and material resources (not to mention the legal authority) required to carry out “the work”, being able to contract the private sector to assist the public sector in fulfilling its core function of keeping the country safe for private wealth-creators is extraordinarily helpful.

Like the Pinkertons of old, TCIL has parlayed its ability to move with confidence in the shadowy territory between what is lawful and unlawful; ethical and the unethical; into a highly lucrative business. There has always been, and will always be, a lot of money to be made out of letting capitalism’s friends know, in some detail, what their enemies are up to.

This essay was originally posted on The Daily Blog of Thursday, 21 June 2018.
Posted by Chris Trotter at 11:44

Keep within the law or get it where the chicken got the axe.

"The core function of the modern state is the facilitation of private wealth-creation."
For some.

Reminds you of cops that infiltrated anti-tour groups in '81 pretending to oppose the tour.

And SIS agents that attended lectures on Russian topics at New Zealand universities posing as students. And later other SIS agents attempted to 'interview' academics at universities on their 'views' on developments in Russia.

A lot of this stuff was ham-fisted nonsense.

Chris;
So well said.
But who should the voters support?.
Prayer helps.
So does booze.
I'll stick to both.
It does help the pain.
God bless New Zealand.
Amen.

Pinkertons 1855. About the time of NZ founding Treaty of Waitangi 1840.
How far did we advance in the following years? Did we reach high-tide with occasional king tides, in the 1990s, 150 years later. It seems now like low-tide, with occasional inundations to destroy what is left of our earnest efforts to build a country. How much further back do we go towards conditions prevailing at Pinkertons genesis?

Our economist Bill Phillips built a physical working model display of the British economic system. What we want is less spying on people to catch them thinking, and bring the thinking out in the open, let it spread like true 'brain fever'.
https://www.quora.com/Does-anyone-know-of-any-attempts-at-building-a-working-model-of-an-economic-system-from-physical-objects
https://en.wikipedia.org/wiki/MONIAC

(Could a working model be built now that would illustrate this dysfunctional economy with a side helping of semi-religious belief system that has no connection to the teaching of Jesus and all of it invisibly tethered to Mammon? Put money into this sort of think-tank and take it out of mindless space corps and exploration which is the prosaic man's replacement for ideas of heaven and the unknown after-life.)


Private secret intelligence services are a menace, for just the reasons that Chris laid out. But so are the state organizations which hire them. The NZSIS has had a cavalier disregard for the law, and the constitutional and legal abuses perpetrated by the NZSIS in recent years go well beyond what Thompson and Clark would even dare to contemplate. Under the leadership of Warren Tucker the NZSIS conspired to provoke civil conflict in this country, and a catastrophe was only averted through the combination chance and the good sense of the independent judiciary, albeit at a significant cost to the New Zealand taxpayer. Has the SIS learned a lesson from that affair? I fear not. The SIS still seems determined to go well beyond its lawful function of gathering intelligence.

On a managerial / commercial basis I have a problem with these people being hired by state entities.

A manager gets headcount to do the base job, so there is supposedly a balance between required staff and the task at hand.

First staffing levels should match requirements and related funding....to "contract out" necessarily exceeds budget which we the taxpayer pick up, not good management.

Or secondly there is a budgetary allocation for activities that for nefarious purposes are to be "outsourced". If this is the real reason we have cause to be alarmed that the state won't do it's own dirty work.

Haven't read your Pinkertons article since it's unreadable against your new wallpaper. Just remember the agency was founded by a poor Scot who fought agin oppressive employers in his native land, for slaves in his new land and agin stike-breaking by his sons in old age. How disgusted this 'Guid Scot' must have been while dying. When there were so many bad Scots 'getting on'.

Oh, the wallpaper was just the (fkn) computer.

I learnt what I knew about Allan Pinkerton in a doco on the History channel, and now from Wikipedia. I believe the doco over the less decisive Wiki article. A good- ish man in foul times. As opposed to fellow Scot and NZ Govt land-buyer Donald Maclean, who ultimately went with the flow to his own wealth and 'public esteem' ( always prefer his and my fellow Hawke's Bayer William Colenso, with his awkward words at transactions of power).