Silence Of The Lambs: Why Is The CTU Saying So Little About The Resident Doctors’ Struggle? 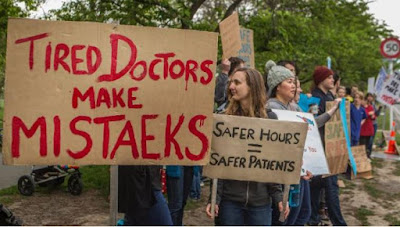 “In the end we will remember not the words of our enemies … but the silence of our friends.”
─ Martin Luther King

THE COUNTRY’S DHBs have embarked on a dangerous and deeply cynical campaign to oust the Resident Doctors Association’s (RDA) long-time champion Deborah Powell. One of New Zealand’s most effective employment negotiators, Powell has become an intolerable hindrance to the DHB’s determination to roll back the gains of health professionals in the nation’s public hospitals.

The RDA represents roughly 3,500 of the 4,000 resident doctors working in New Zealand. In 2017 it was successful in securing significant improvements in its members working conditions – most particularly in relation to the number of hours, consecutive days, and night-shifts the DHBs could require them to work. The RDAs success did not come easily. Strike action was required before the DHBs reluctantly agreed to the changes demanded by the union’s members.

It is now clear, however, that the DHBs were not willing to let the RDA’s achievements stand.

Around the middle of 2018, a very small group of resident doctors, with logistical assistance from the Public Service Association (PSA) combined to form a new union: Specialty Trainees of New Zealand (StoNZ). The new union’s 400 members very swiftly negotiated their own multi-employer collective agreement with the DHBs. The improved conditions incorporated in the RDA’s national agreement were not included in the SToNZ document.

That achieved, all the DHBs had to do was wait for the RDA’s national agreement to expire. From 1 March 2019, the only collective agreement available for a resident doctor joining the staff of a public hospital would be the document negotiated by SToNZ – not the RDA. By running out the clock, the nation’s DHBs could wipe out all the RDA’s gains and fundamentally undermine Powell’s relationship with its members.

The strategy adopted by the DHBs’ negotiators bears an alarming similarity to that adopted 107 years ago by the Waihi Gold Mining Company. Step 1: Encourage the establishment of a small rival union. Step 2: Use it to undermine the position of the much larger union resisting the employer’s demands. It was a strategy which led directly to one of the most bitterly contested industrial disputes in New Zealand labour history. The Waihi Strike was only broken by a fatal explosion of state-sponsored violence.

Notwithstanding this alarming precedent, the NZ Council of Trade Unions (CTU) has opted to make no comment on the tactics being employed against Powell and the RDA. Sources within the trade union movement attribute the CTU’s reticence to an ongoing and acrimonious row over membership recruitment. On one side stands the Association of Professional and Executive Employees (APEX) serviced (along with the RDA) by Contract Negotiation Services (CNS) Powell’s private company. On the other, the CTU’s largest and wealthiest affiliate, the PSA.

When it comes to Powell, the PSA National Secretary, Erin Polaczuk, pulls no punches. In an e-mail leaked to Stuff’s Stacey Kirk, Polaczuk writes: “The fact that workers are leaving CNS across the board should come as no surprise given their infamy, modus operandi and history. PSA strongly supports the CTU code of operating between affiliate unions and disagrees entirely with the approach that CNS organisations take, which is to poach organised labour”. Neither the RDA nor APEX belong to the CTU.

Curiously, Polaczuk’s e-mail makes no mention of the PSA’s role in helping SToNZ get established. “Poaching” from “organised labour” is clearly regarded as a much graver sin that facilitating the formation of a minority union which employers later use to break the industrial resistance of the union representing the overwhelming majority of workers in dispute. In the lexicon of the trade union movement there’s a very ugly word for that sort of behaviour.

It would be a tragedy if the CTU’s refusal to follow the example of the Nurses Organisation – the CTU affiliate which has proudly and publicly expressed its solidarity with the striking members of the RDA – has anything at all to do with the fact that the current CTU President, Richard Wagstaff, is a former National Secretary of the PSA. Union rivalries should not be allowed to obscure the very real threat posed to the New Zealand trade union movement by the DHBs’ divide-and-rule strategy. If Powell and her CNS negotiating team are beaten, and the RDA sustains a massive industrial defeat, then employers in other sectors of the economy will not be slow to follow the DHBs’ lead.

The precedent set at Waihi: establishing a “scab” union to facilitate the crushing of a real one; instantly became the template for the destruction of militant unionism in New Zealand. Has the CTU lost so much of its historical memory, is it so bereft of strategic acumen, that it is willing to see the DHBs strip the resident doctors of their hard-won conditions – and do nothing? Can it not appreciate how quickly the health sector bosses will move on from the resident doctors to their senior colleagues? And from them to the nurses?

If it is not appropriate for the CTU to draw a line in the sand on this issue, then when will it be appropriate? When the only union left standing is the PSA? And that only because the state sector bosses are holding it up.

This essay was originally posted on The Daily Blog of Friday, 18 January 2019.
Posted by Chris Trotter at 10:06

You are being paranoic.

According to Stats NZ the average income of kiwi households is about $105,000 and according to Payscale.com a Masters in Engineering will net you about $75,000 in Auckland city so there's a significant gap where education is struggling to keep pace with the falling power scaling.

So how do we go about re-industrialising New Zealand? Well the usual way, with huge Government stimulus. Not by stealing but calling it business inobation, privatisation and borrowing. That's the standard method. In this case there's no need for a lower minimum wage.

So about the power of unions. It is one that stabilises the economy. This power is not good, nor is it evil, it simply counters something that threatens the economies ability to maintain balance. And the larger the threat, the more this power grows.

to a child of the 70s power games by the (ostensibly) workers representatives come as no surprise....and the facilitation by the opposition (capital, and its representative elite) is as unsurprising. Organised labour long ago lost its focus to improve the lot of ALL workers, despite the (overly) fond reminisce of many.

Mrs Powell and her husband own the Union, lock stock and barrel.
The union members pay a fee to them for the services the Powells provide to them.
Its called Private enterprise trade unionism.
It is understood the Powells are quite rich and own a Avocada farm.
Nice work if you can get it, they got it.
I believe its unique in the World wide trade union movement.

I should have added to my last comment:
"All the best to the Powells, they do a good job of work".

I was a member of the PSA when I was a bureaucrat.

The PSA was completely useless.

Later I was a member of E Tu.

They were very good at sorting out an arsehole employer.

Silence of the lambs remake by Maori TV, renamed Shut up Youse.

No Kat. The Joke goes : Q. Do you know the name of the Maori sequel to "Silence Of The Lambs"? A. "Shut Up Ewes". If you are going to tell lame decades old Maori jokes, at least get them right, honky.

Ask the engineers union about poaching members for their unions survival without care of wage cuts they using the law pulled into their ranks.Doctors what that oath they take about caring humanity,still they shite on their fellow equivalent and lower educated worker associates,by joining this greed elite organisation pure for money profit,and without humanities care,just their selfish capitalist arrogance of my cost education, my place of educated superiority,my place as a doctor.Those wealth those wealth chasers,lets find a profit margin gap and lets exploit in favour of our management friends in the hospitals administration lets start a professionals union away from the common herds of them,they seem lost looking anyway.

Ooh er what a lot of unhappy chappies. I don't see much enlightenment coming through, some new approach beyond the old ones from the 70's and 80's such as strike at Christmas, or threaten it, when all the people of NZ, of whom unionists consider they are part, are to be inconvenienced in their precious private life. 'Never in the field of human endeavour, have so many been distressed by so few' sort of thing.

Many people, including unionists, have little time with family; they find the money make to travel and visit each other at Christmas for a few days. But no, the unionists elevate themselves to the deserving of consideration, and the undeserving is everyone else. Isn't that an example of elitism? How left-wing, how socially-democratic is that?

That comment of mine sounds terrible in this context of the doctors. Government, through the DHBs should not overwork these young people overwork, with long periods with the same long hours and with a lot of responsibility for diagnosis on their shoulders. And with many drunk and disorderly or druggy patients recently.

All unionists deserve decent conditions, even those who don't join. However I feel people who claim cult status preventing them belonging to groups outside their religious entity, should have their attitudes to service to the community checked for suitability for the job.

Warbler,and the trains running on time.