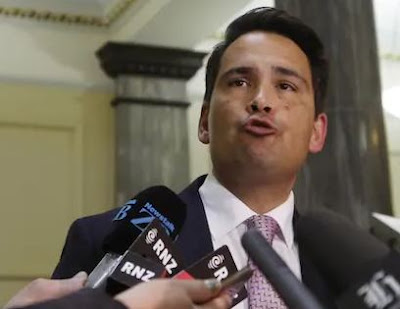 This essay was originally posted on The Daily Blog of Thursday, 30 May 2019.
Posted by Chris Trotter at 17:18

Nearly everyone made the same mistake. If Bridges past history was not so shit no-one would have fallen into the trap.
D J S

Chris
That is big of you admitting mistakes before even being prompted. Very few others would admit to that. It is one of the reasons I enjoy reading your columns, even if I might not agree with the sentiments.
Chris Morris

Bridges is a political twit who will never be prime minister of NZ. Your article was wasted.

Maybe time to have a bit of a clear out in Treasury, because whatever their job actually is they don't seem to be very good at it. Particularly the prediction part.

His wife did call him "a dirty little street fighter"......Bridges will never be the Prime Minister of this country.

Rule number one: never apologise to Simon Bridges. Unless he has proven conclusively that NZ National did not know about the online exploit via Treasury website practices, prior. And that it was a random series of numerous searches that “someone” in Chris Bishop’s office apparently felt the need to do.

Was Simon B doing good for the country? Was it important and did it justify suggesting that the Finance Minister should resign which would destabilise the country? Was he trying to bring National into prominence in any way he could? Was it that important that a broken convention of announcing everything on the same day by the Finance Minister was enough to upset Labour Coalition (unless he wished to leak things ahead of time)?

There was no insider trading involved, it appeared to be just bloody-mindedness on the part of National. Is that good that an Opposition should behave like this? Has Labour ever done anything like this and it might be retaliation, and you did it too so there? Would that be good for the country? If Parties posed that question before every action, would that be good for the country? I think I have put this kerfuffle in perspective.

Chris, I wearily greet you re this clever piece of opining. Sure it was a bungle, but also needed some balance in critique. I am over political populist games played only to win over those who are too-busy, bored, and less-well read et al. When Simon Bridges dog-whistled as he sneeringly criticised the Budget "Tanks not teachers" he knew he was lying. Replacing ancient Orions and getting Naval competency up to speed is part of real Service for country. Warmongering is long proscribed in our land, and whilst his image of heaps of steel crushing and killing as they go, helps his shallow style of Opposition-leading, it is a failing in my book.

Kia ora Chris
Your mistake, as you have acknowledged, was to believe the word of a senior official of the New Zealand state. No shame in that. We need to be able to take most if not all people on trust and particularly we should be able to trust those who rule over us.
But the time has come to acknowledge that we in New Zealand can no longer trust "our" state officials. From now on everything they say to us should be checked and verified before it is accepted as fact.
You were right to apologize to Simon Bridges, but not just for Simon Bridges sake. It was necessary for the sake of your own personal and journalistic integrity, which as a result of your correction and apology remains undiminished.