A Fool Rushes In. 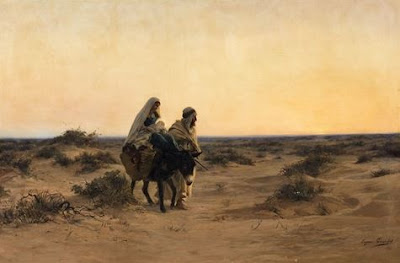 Seeking Refuge: Were Jesus, Mary and Joseph fleeing persecution in Palestine or Judea? Were they Palestinians or Jews? Green MP, Golriz Ghahraman, in describing the Holy Family as Palestinian refugees, touched off a firestorm of controversy, demonstrating the sinister ease with which history and propaganda can be confused.

ONLY RARELY has History been press-ganged so brutally into the service of political propaganda. The moment Golriz Ghahraman bestowed the status of Palestinian refugees on Jesus, Mary and Joseph, everybody with an opinion on Israel/Palestine immediately rushed to their respective corners and, following a quick word with their trainers, came out swinging.

What was Ms Ghahraman thinking when she tweeted her opinion on the nationality of the Holy Family? The easiest answer would have to be: she wasn’t. Caught up in the endless cut-and-thrust of the pathologically politicised Twittersphere, the Greens’ foreign affairs spokesperson was simply slashing back wildly with her rhetorical cutless.

If the Christian Right was asserting that members of its faith community were under no moral obligation to assist refugees, then it was only fitting that they should be reminded that Jesus, Mary and Joseph had once been refugees – and Palestinian refugees at that!

It is interesting to speculate how long it took Ms Ghahraman to grasp the full political consequences of her outburst. Given the instantaneity of the Internet, one must assume that the realisation came quickly. Certainly, the speed with which she was prevailed upon to issue a fulsome apology to the Jewish community suggests that her colleagues recognised the magnitude of Ms Ghahraman’s insult more-or-less immediately.

For insult it was. Deliberate or unintentional? It hardly matters. To characterise Jesus, Mary and Joseph as anything other than a Jewish family is to locate oneself in the midst of the very worst kind of antisemitism.

It was, after all, the Nazis who insisted that Jesus was an Aryan.

How could he not be? To claim that Jesus of Nazareth; a Galilean carpenter; and a subject of Herod, King of Judea; was a Jew; is tantamount to suggesting that the fount of all the World’s evil, is also, somehow, the source of its redeemer. No anti-Semite could possibly accept such a slander on the founder of the Christian religion.

That the Christian churches of Germany did not protest loudly against these theological and historical calumnies indicates how deeply the notion of Jesus’s non-Jewishness was imbedded in the popular imagination of Christendom. For centuries, ordinary Christians had been fed the “blood libel” that the Jews killed Christ. It seemed obvious, to Catholic peasant and Protestant townsman alike, that the Jews were hardly likely to murder one of their own.

For citizens and supporters of the State of Israel, the import of Ms Ghahraman’s message was equally alarming.

To claim Jesus, Mary and Joseph for the Palestinian cause is to make of Israel an interloper and a coloniser: the malignant cuckoo in the Arab peoples’ historical nest. Even worse, Ms Ghahraman’s characterisation neatly reverses the foundation myth of the Israeli state. Rather than the Jews returning to their ancient homeland, it is the Palestinians who are seeking to restore the status quo ante.

The name Palestine is recorded in Ancient Egyptian hieroglyphs, chiseled a thousand years before the Roman Empire ever sent its legions a-conquering. By this reckoning, the people between the Jordan River and the sea have always been Palestinians. Therefore, the people calling themselves Jews have no claim. They came a-conquering from somewhere else.

Israel’s answer to such revisionism is an emphatic “No!”

The presence of the Jewish people in the lands between the Jordan River and the sea in the early years of the Christian Era is an indisputable historical fact. When the Roman Empire’s man in Jerusalem, Pontius Pilate, had a religious rabble-rouser called Jesus crucified, it was for the crime of allowing himself to be called “King of the Jews” – not “King of the Palestinians”!

It would be another 100 years before Rome renamed the territory between the river and the sea “Palestine”. After repeated revolts, culminating in the ruthless expulsion of what remained of territory’s inhabitants, the Emperor Hadrian determined to make it as if the homeland of the Jews had never existed.

And yet, no matter where they landed, the great Jewish diaspora did not forget. Passover after Passover, century after century, they lifted their cups and vowed: L’Shana Haba’ah B’Yerushalayim – Next year in Jerusalem!

Small wonder that Ms Ghahraman apologised so speedily. Her foolish and inflammatory tweet blundered into a world where, today, angels themselves fear to tread. The riddle of Israel, Palestine, and their holy refugees, renders even Twitter mute.

This essay was originally published in The Otago Daily Times and The Greymouth Star of Friday, 19 July 2019.
Posted by Chris Trotter at 10:06

The woman is both at once an silly little ignoramus and a dangerously subversive force.
Her definition of free speech is limited to opinions she agrees with.
Her sick and twisted world views are far more compatible with the country of her birth which makes one wonder why she doesn't bugger off back there.
Oh that's right, our obviously superior culture allows this imbecile freedoms that she would be executed for in that country.

As a child in the 1970s I wondered why Jesus was depicted as a north European while everyone else in the Holy Land looked like Corporal Klinger from the popular TV show M*A*S*H*.

I am still wondering.

I have to point out that Palestinians are the descendants of everyone who was living in the Holy Land before the establishment of the Israeli state. That included Jewish people as well as Arabs and other Muslims. Since Joseph and Mary lived in the Holy Land, not in the Diaspora, any descendants either one of them might have left -- via Jesus' brothers or sisters, let's say -- would be Jewish Palestinians rather than Israelis.

Joseph, Mary and Jesus were not refugees in any case. Mary and Joseph were Jewish citizens of Judea travelling to Bethlehem to be counted in the census of 6BC.

Herod's family were converts to Judaism, but not ethnically Jewish. The Holy family were no doubt ethnically Jewish, but once they believed in the divinity if their son / brother would have been early Christians. The Romans saw the early Christians as a Jewish sect, but it is unlikely they would have been involved in the second Jewish uprising, and doubtful they would have suffered the Jewish diaspora. When Constantine mainstreamed Christianity, the early Christians in the Levant would be seen as Palestinian Christians. With the Arab extension of the 7th Century, many (although not all) converted to Islam.
The defendants are Christian or Muslim Palestinians.

Funny how the right have conniptions about free speech when it's not their speech.
Funny how whenever a woman makes a statement they regard as wrong she is always "silly, little"
I long for the time when someone like Simon Bridges is described as a "silly little boy"
Ah well, we live in hope

To say that Zionists came a-conquering from somewhere else is not revisionism. There were Jews in Palestine for centuries before the Zionists arrived from Europe with their aim of creating a Jewish state. The Jews that were already living in Palestine didn't join in with Zionists until they were forced to pick sides by the conflict between their Palestinian neighbours and the Zionists.