A Badge of Honour 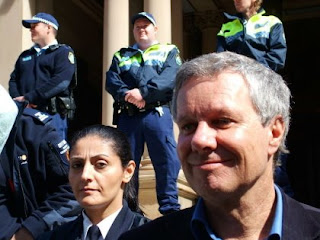 Keith Locke and the guilty agents of state repression
THERE are times when the antics of Green MP Keith Locke make me want to scream.
"Radio Keith" – the unreconstructed voice of Sixties radicalism – is as predictable as those dreadful evangelical Christian radio stations. No matter what time of the day or night you tune in, the message is always the same: personal salvation through right-wing bigotry.
Now, it would be most unfair to label Keith a left-wing bigot, but it is fair to say that there is precious little acknowledgement of the complexities (let alone the ambiguities) of human motivation in his political pronouncements.
If a policeman guns down a citizen, Keith is always on the side of the citizen. Is this because, through revolutionary eyes, all police officers look like "pigs"? Brutal, unthinking animals in the pay of the capitalist "Establishment"?
If so, what, to Keith eyes, do their invariably black and/or poor victims look like? To hear him tell it, they’re the helpless by-products of poverty and discrimination – innocent by definition.
Guilty-as-charged, however, are the economic criminals: the political and business leaders who allow social dysfunction to flourish rather than reduce the rate of return on shareholders’ funds. If anyone should be left to the tender mercies of the Taser and the Glock, say the revolutionaries, it should be them.
Where this revolutionary "logic" falls down, of course, is in the attribution of individual agency (and hence responsibility) to the servants of the system – but not to its victims. If the unemployed Maori teenager, high on "P", who guns down the proprietor of a liquor store is the guiltless by-product of poverty and discrimination, then the police marksman who shoots him dead is equally innocent of mendacity – being no more than the brainwashed by-product of a society in which the citizen’s right to be secure in both person and property is sacrosanct.
But, a world in which individuals are generally acknowledged to be helpless puppets, whose volitionless limbs are moved by forces over which they exercise no control, would also be a world in which "politics", as we know it, could not exist. And this would be especially true of revolutionary politics. Because, at its heart, the revolutionary credo holds out the promise that human-beings, by an act of collective will, can reconfigure fundamentally the social and economic structures in which they are enmeshed.
And this is what puzzles me about Keith’s outrage at the contents of his recently acquired SIS file. All his adult life he has advocated the revolutionary transformation of New Zealand society: initially as a Trotskyite Marxist; and, more latterly, as a libertarian eco-socialist. Both these ideologies offer a direct, revolutionary challenge to the sanctity of private property – and hence to the current configurations of power in New Zealand’s capitalist society.
Now, Keith has made much of the fact that his file contains no evidence of any criminal activity (with the exception of minor civil disobedience during the Springbok Tour). But, does this mean that Keith’s revolutionary activity has been entirely harmless? Only if he is willing to argue that the radical ideas he’s espoused – and continues to espouse – possess no power to impel his fellow citizens to action. (And if that is the case one wonders why he bothers!)
But, if he concedes that his ideas are, indeed, motivational, can he then legitimately suggest that the State, confronted with a revolutionary challenge to its core institutions, should, nevertheless, deny itself the right to monitor the actions of the challenger?
Surely not.
Arousing Keith’s genuine ire, however, is the revelation that the SIS continued to monitor his actions even after he was elected a Green Member of Parliament in 1999. For some reason Keith believes that a "libertarian eco-socialist", located at the very heart of democratic power, should be considered less of a risk to the security of the capitalist State than some poor mug struggling ineffectually in an isolated Trotskyite sect. Not even an MP’s decision to involve himself with the Tamil Tigers – inventors of the suicide bomber – would prompt Keith to authorise SIS surveillance of that politician’s contacts.
Just this once, I wish Keith had done something unpredictable – like accepting his SIS file as a badge of honour. After all, for more than fifty years the New Zealand State has paid him the ultimate tribute of taking his revolutionary rhetoric seriously.
This essay was originally published in The Timaru Herald, The Taranaki Daily News, The Otago Daily Times, and The Greymouth Evening Star of Friday, 13th February 2009.
Posted by Chris Trotter at 14:03

Chris will you ever stop wacking and pinging our friends and colleagues They are different some of them but they are on our side. Have you forgotten that thing called unity ? You write such good stuff mostly and then this s#@t. FFS stop and think

Well said Chris. In a way it is most important that you call bullshit on "your own side". Lockwood Smith has far more credibility holding up the values of democracy as a National Party MP than if Wilson still occupied the chair.

The foundation of western democracy is a willingness to accept movements which radically shape society. What is the difference between a right wing businessman advocating radical neo liberal change and a left wing activist advocating radical anti capitalist change? Both aim to radically reshape the way capital is dealt with in our society and how it is distibuted. Therefore using your logic both should be under SIS surveillance?

The uproar around SIS and police spying on activists is because it is as we have said all along state repression and surveillance aimed at protecting the capitalist system from citizens getting organised. It is aimed at preventing the rise of democratic movements which challenge the way our society is structured. It is about protecting the corporate structure which is not accountable to the public.

Any democracy should be willing to accept radical movements be they libertarian or anti capitalist. It is only if laws are being broken that the state should start looking into these organisations.

Why so keen on attacking your own side lately Chris?

Have they got something on you or something?