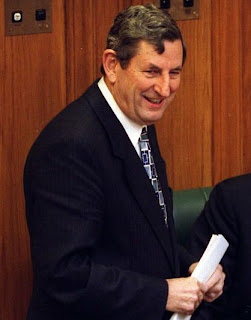 Jenny Shipley's Treasurer (remember them?) - Bill Birch.
THIS YEAR’S BUDGET harks back to an earlier, much simpler, period of New Zealand history; to another election year and another attempt to convince the electorate that National stands for a youthful and progressive alternative.
Flicking through the pages of Brian Edward’s Right Out: Labour Victory 1972 – The Inside Story, it is impossible not to be struck by the parallels between 1972 and 1999.
Then – as now – National was trying to "bed in" a new leader. Jack Marshall had taken over from Sir Keith Holyoake, - a "consensus politician" whose rather pompous style no longer seemed appropriate to the times. But the curious mixture of conservatism and liberalism, which Jack Marshall brought to the top job, made it difficult for him to settle on a consistent political persona. One minute he was "Gentleman Jack" promising to "put people first", and the next, a tough-guy with a "steel core", declaring National to be "Man for man, the strongest team". Marshall’s identity crisis was not helped by the all-too-obvious leadership ambitions of his Finance Minister. Where Marshall oozed uncertainty and confusion, Rob Muldoon radiated conviction and a powerful sense of purpose.
The public mood was profoundly hostile to this leadership combination. National had been in power for nearly twelve years and there was a widespread feeling that it was "time for a change". The prevailing Keynesian economic orthodoxy looked increasingly threadbare as inflation ate away ordinary consumers’ purchasing power, and pushed "the good things of life" further and further into the future.
Jack Marshall attempted to counter this sense of drift by swearing in a younger and more dynamic group of ministers, and by committing National to a raft of legislative initiatives in the area of social policy. His Finance Minister complemented the Government’s new burst of liberalism by dramatically increasing public spending.
Mrs Shipley and her Treasurer must be experiencing a strong sense of déja vu as they set the scene for the 1999 General Election. Like their predecessors, they are determined to "re-brand" their ministry as progressive and forward-looking. The opening lines of Bill Birch’s Budget Speech are, accordingly, filled with millennial promises of a new age. "The 1999 Budget", he says, "is about preparing the nation’s children for success in the 21st century, improving the capability for that task of all New Zealand working families, and giving disadvantaged families and children a much fairer shot at a good life in the future."
Unfortunately for the National Government, the headline items of this year’s Budget are too tentative, too constrained, too tightly targeted, and too obviously pitched at their richest supporters, for the "progressive" and "family friendly" label to stick. Its "Parental Tax Credit" cannot compete with Laila Harré’s Parental Leave legislation (less than half of all new borns will qualify!) and the promise to abolish the Broadcasting Fee (but only after the election) is immediately offset by a $47.00 rise in the motor vehicle registration fee. Verily, the Treasurer giveth, and the Treasurer taketh away.
Likewise, National’s Clintonesque emphasis on education, R&D and the role of information technology in the new millennium, has not been backed with anything like the appropriate levels of funding. A similar penny-pinching approach is evident in Maori policy. Tau Henare and his colleagues must be bitterly disappointed.
The abolition of stamp and death duties will, of course, be of most benefit to the already wealthy – as will the promised tax cuts. It just won’t wash. Such New Right orthodoxy has already become as threadbare as 1970s Keynesianism. Too many people now know that cutting taxes only leads to reduced public services. The formula – like the Government – has grown tired.
Time for a change.
This ‘From the Left’ column was originally published in The Dominion of Friday, 21 May 1999.
Posted by Chris Trotter at 13:39

Norman Kirk's secretary's book had a good piece in it about Muldoon. She reckoned that Kirk had been thunder struck by Muldoon's arrogance in the weeks before the 1972 election. Then it struck Big Norm. I want to be prime minister and if Gentleman Jack wins in 1972, he will lead the party into the 1975 election and by 1978 I will be too old. Undermine him now, then get in to have a go in 1975.
That stationary engine driver knew a thing or two, didn't he?
But do not forget another basic fact; that 1975 election was possibly the greatest turn around in N.Z. political history. Labour went from a huge majority to a huge minority in one fell swoop. Our terms of trade during the early part of the Kirk regime were stupendous. But that shiver looking for a spine to run up (M.P. for Tasman) washed it away. It makes him sound curously like Anne Batten's hop on.
Stephen J.L.