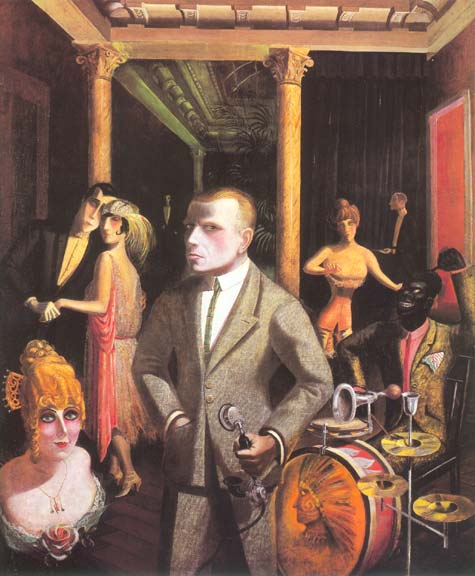 Otto Dix To Beauty 1922
On the day the Ministerial Review Committee released its report on the Foreshore & Seabed Act, a shiver of cold foreboding ran up my spine, and I recalled this poem. Written as the Thatcher-Reagan counter-revolution was hitting its stride, and based on a real encounter in Dunedin’s famous Captain Cook Tavern, the poem addresses the awful attractiveness of creative irrationality and intelligent cynicism – with which the fascist temperament is imbued, and which confers upon its most talented exponents such frightening plausibility.

The bar all but deserted,
He smoked silently in the shadows,
Keen eyes strafing the tables.

‘Your bearing betrays you, comrade –
Visions of Nuremberg plague your dreams.’
He laughed at my confusion.

‘None believe the soft tales Mother told’,
He whispered. ‘The bullet and the buckle
Seduced us long ago.
Drink with me now and let us speak
Of fire and death.
The ultimate orgasm of annihilation
That all men yearn for – kill for.’

In the ashes of his cigarette
He traced a swastika.

Night thickened beyond the bar windows.

He recited the litany:
Hitler, Heydrich, Himmler, Hess,
Goring, Gobbels and Speer –
The best of them all.

A toast!’ he cried,
Crashing his heels together.
‘To better leadership
And improved technology!’

His glass shattered against the wall.

Our paths diverged into the darkness.
A pale moon shivered
Among the clouds.

It's poetry, Luke, "losing it completely" is what it's all about.

Seriously, you should try it.

I have to say, political commentary's gain was not poetry's loss, Chris.

Can't see much relevance to the foreshore and seabed issue, though I suppose if I peruse the comments section of Kiwiblog I'll work it out ...

In the immortal words of Pauline Hanson: "Please explain."

Hitch Hikers Guide to Galaxy, Vogons wrote the second worse poetry in the Universe...lethal to many parties.

choice one chris..i get it..the painting says it all..take care