The Rise & Fall of Anglophonia 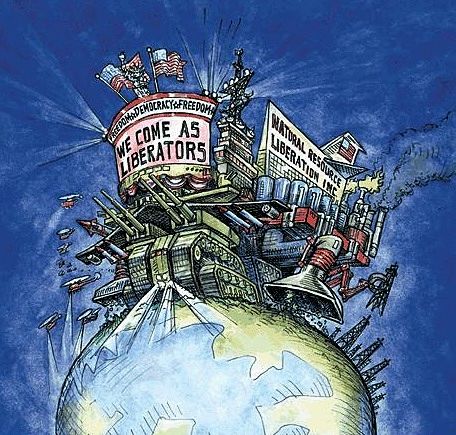 The Good Old Firm: Anglophonia, led by the USA, dominates the planet. But the reckless greed of its elites and the moral bankruptcy of its neoliberal creed offer little hope of its longevity as a global hegemon.

THERE WAS A TIME when membership of the Anglo-Saxon Club was a good thing. The powerful ties binding the United States of America to the United Kingdom, Canada, Australia and New Zealand were the envy of other states. No matter how strategically important these nations might be to the security of Anglophonia, they could never hope to enjoy the familial intimacy of its member states.

The linguistic, cultural, historical and economic affinities animating the Anglo-Saxon powers ultimately cohered into a global hegemony of unprecedented reach and power. With the eventual collapse of the Soviet Bloc in 1989-91, Anglophonia found itself bereft of serious ideological rivals. The New World Order spoke English – with an American accent.

But Anglophonia’s triumph – codified in the neoliberal economic prescriptions of the so-called “Washington Consensus” – turned out to be rather hollow.

The Cold War had disciplined Anglophonia’s ruling-class in much the same way as the long struggle against the rival city-state of Carthage had disciplined the wealthy Patricians of Ancient Rome. Without a common foe to enforce a high level of social cohesion and equity, the elites of both world empires felt free to loot their national treasuries and vitiate the political and economic rights of their – now burdensome – lower orders.

In the case of Anglophonia, this “revolt of the elites” (to borrow Christopher Lasch’s striking terminology) is readily tracked by calculating the share of pre-tax household income received by the top 1 percent of Americans between 1917 and 2011.

Immediately prior to America’s entry to World War I, the top 1 percent commanded just under 18 percent of pre-tax household income. Their share fell about 3 percentage points during the war, but by 1929 it had soared to an astonishing 20 percent.

From the 1930s to the 1970s, however, the fortunes of the top 1 percent changed dramatically as the Great Depression, Roosevelt’s “New Deal”, World War II and the fiscal exigencies of the Cold War relentlessly reduced their share of America’s wealth. The nadir was reached in 1972 when the top 1 percent’s share fell to just 7 percent of pre-tax household income.

With the election of Ronald Reagan in 1980 the revolt of the elites began in earnest. Between 1985 and 1989 (the year the Cold War ended) the wealthiest American’s share of pre-tax household income leapt from 9 percent to just under 13 percent. By 1999 it stood at 16 percent and by 2005 it had reached 18 percent. Today, the top 1 percent of American households commands the same 20 percent share of pre-tax income as 1929.

These bare and brutal statistics chronicle the steady growth and sudden collapse of social equity in the United States. But the whole sorry saga of union-busting, deregulation and privatisation has, from the late-1970s to the present, facilitated the elites’ reclamation of economic and social pre-eminence throughout Anglophonia.

To preserve at least the façade of democracy while they re-construct the plutocratic order of the 1920s the elites have been forced to hollow out the core institutions of the social-democratic culture that did them so much damage. The trade unions were the first to go, closely followed by the universities (at least in their guise as critic and conscience of society). Their most important conquest, however, has been the news media. Like the circuses of Ancient Rome, the Anglophonian news media is designed to inflame rather than inform.

If you would like to see the future – watch Fox News.

Not even science is exempt from the relentless partisanship of Anglophonia’s plutocrats.

As recently as 2007 just over 70 percent of Americans told pollsters that they accepted anthropogenic global warming as a scientific fact. Canadian social critic, Naomi Klein, found that by 2009 only half America held that view.

The same phenomenon is visible in Australia, where the most recent surveys show less than half the population believing in global warming. Ask these climate-change sceptics why, and they reply: “Because global warming is a socialist plot to redistribute wealth”.

This is the price plutocracy is forced to extract from the societies it feeds on. Neoliberal dogma is to Anglophonia what Christian dogma was to Rome: the ideological vector of its intellectual and cultural disintegration.

English will probably remain the lingua franca of the Twenty-First Century, but increasingly it will be spoken with a Chinese or Brazilian accent.

This essay was originally published in The Dominion Post, The Timaru Herald, The Taranaki Daily News, The Otago Daily Times and The Greymouth Star of Friday, 18 February 2011.
Posted by Chris Trotter at 08:21

Meanwhile we respectfully stoop and tug our forelocks to a gormless unemployed pommy bastard on a free holiday to the Antipodes. Who, with all his speech writers and spin staff can't even pronounce Kia Kaha.
Shit we're a sorry lot.
What was the Enlightenment for? What are we??
Before the planet blows up there's still time to get our act together.
Off with his too frequently photographed empty balding head!

On a well-earned bender between sheds many moons ago I wound up at some long-hair hooley and parked my weary arse on a cosy bank for a quiet fag. Some greasy-looking weed promptly mounted a soap-box nearby and ranted to me and a dog about the meaning of life. The only thing I remember is his theory that whitey had survived two ice ages and thus wound up superior in the rapacious gene game, and the only way for the rest of the world to avoid total domination was to breed quicker to produce massive numbers, and acquire steel by enduring its own "ice ages" under whitey's opression.
Later on he went to Invergiggle, bred with gusto and became mayor, but to my and his own disgust backed Key in 08.
Wee while till genetics catch up down here.

Nup on your final point but Crisso: neoliberal dogma is the whitey gene in its final, desperate, demonstrably disastrous death throes. Aye, He did to Rome; and The Churches are nearly dead now, thank Christ. He'll do it again soon, via Mickey J, Mohammed and us all.

A wonderful piece of of historical synthesis and speculation, Chris!

But I suspect that the United States will remain a power of some significance for at least another century, even if it's currently going through one of its periodic troughs and seems destined to lose the top slot to China.

It will also remain, in formal, governmental terms, a primarily English-speaking country, although Spanish may end up being almost as widely spoken at the domestic level and other non-English tongues will also grow in significance.

Meanwhile, English is already India's dominant governmental and business language and will probably become much more widely spoken at a domestic level as the country's economy modernises and advances.

Although Brazil, Russia, Mexico, Indonesia, Germany, South Korea and, perhaps, Turkey are all likely to be significant players in our multi-polar world, the three power houses of the next half century will almost certainly be China, the USA and India (in that order).

So Anglophonia won't decline. It will mutate. But there may still be a politically important Anglosphere, based around the Washington-New Delhi axis.

Fascinating.
Did you hear the interview between Tariq Ali and Kim Hill this am ( Saturday19/03/11).

The coincidence of your views is wonderful.

After 3 decades of neo liberal economic propaganda maybe we will lose our chains.

Viva Tunisia, and the other dominoes.
I have to blush at this last comment. I always was a sceptic of the "domino" theory back in the '60's and 70's. It was propaganda.

What is happening in the Arabic world is a genuine populist wave.

How your anglophonic players react is going to be fascinating to watch.

I as well was wondering if you had been listening to or reading work by Tariq Ali.

I look forward to you writing further on the west and neoliberalism.

'From the Left' is e-mailed to editors on Tuesdays.

Tariq Ali's first Robb Lecture was delivered on Thursday, 17 March - 2 days AFTER this essay arrived on Features Desks around the country.

Great minds and all that ;-)

Chris, what is the noun for a collective of dumbarses?
The Anglo countries will still be in charge in 2100 and China and India will have long since been swamped by their corruption and population.
When will the left ever learn that the Yanks are winners precisely because they work on the basis of keep up or fall behind. Suckers!

Are you aware of just how indebted the US is to China at present?

The only reason that the Chinese don't sell off some of their US government bonds is that, if they did, it would collapse the dollar and render their other US holdings worthless.

I'm not sure what other Anglo countries you have in mind.

The UK's recovery from recession is far more sluggish than those of France and Germany because of its post 1980 obsession with financial services as opposed to actually making things.

Australia has waxed wealthy primarily because of China whilst we have failed to wax wealthy despite thereof.

That just leaves Canada. And you could be on to something there. Global warming is rendering the resource wealth of the Arctic and sub-Arctic considerably more exploitable than heretofore. But playing second fiddle to Russia in the resource game doesn't mean you run the world.

That's not to imply that the US is a busted flush. Unlike the UK or New Zealand, it has a protean, entrepreneurial culture and a growing population, which will eventually allow it to recover from its current malaise, just as it recovered from the breakdown of the Great Depression.

But, by then, China's lead will be assured across a wide range of areas, even if much of its population will still be poor by Western standards.

Meanwhile, as far as I'm concerned, India is an Anglo country and the signs are it will be doing pretty well for itself over the next few decades.