The Angel Of History 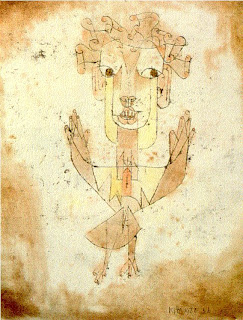 I was speaking to a seventy year old woman the other day, and she said she was voting Labour because her parents voted Labour?
I did not know what to say?
But my in my mind i was thinking, "well that's a naive thing to do"?

I have tended to stay out of the internal 'what happened to Labour' debates on this blog, because I think Chris, you have clearly articulated what's happened to them in your postings over recent months. In short, they have become abstracted from those they used to represent, and have become consumed by 'identity' politics, which in turn has resulted in their deserved irrelevance.

However as someone who believes that the market economy, although imperfect, has generated more wealth and opportunity for more people than any other system devised by mankind, I am amazed when I see you write:

"...the edifice of domination, subordination and exploitation which holds capitalist society in place, that social-democracy seeks to challenge, shrink, modify and, ultimately, dismantle."

This phrasing just sounds like 'dogma' to me, with no real basis in recent workplace reality. In New Zealand, where are these domineering, exploitative capitalist employers? Do you personally know of any?

Yes, in times past they probably existed in their droves, unions served their place, and conditions have improved for the better.

However, I doubt that there is 1% of employers in New Zealand who operate, or think along the lines you have described. I personally know a good many employers, and cannot think of one that fits your stereotype.

Straw men are easy to fight, but their defeat provides a hollow victory.

History has moved on, and there is little point in fighting yesterdays battles all over again.

This is perhaps why today, many of the working poor support John Key. They understand that it is better to be in work and to be aspirational, than to "shrink, modify and, ultimately, dismantle" a system that provides for them economically today, and the very real opportunity for economic advancement tomorrow.

@merlene...I find it hard to vote for Labour because of the reasons Chris states BUT I will: the other alternative is too hard to bear. My disgust for the loathsome principles that the Right holds dear is life long, its visceral. My family are not so united on this, but they know a bad thing when they see it. I understand the 70 year old well. Naive? Informed by experience perhaps.

In fairness to the last Labour Govt there is some continuity with the past in terms of public finance. Dr Cullen did prioritise the retirement of public debt, which was mostly held by foreigners; and he did try to construct a national savings scheme, albeit based on generous incentives. I also recall him use all his rhetorical force to oppose the 1991 Benefit cuts, but he chose not to address poverty directly as finance minister; Clark said there was not enough money, when there obviously was.

The fact remains that the only long term Labour Government was built on a broad constituency that was affected by the Depression, and that explicitly wanted to avoid the effects of long-term unemployment. The truth is that there is not enough social solidarity, for want of a better term, to enforce the measures that could achieve and maintain anything like full employment. While Labour are beholden to the Reserve Bank Act, and defer to Treasury's unchallenged practices, there is no hope for real change. Notice this week that the Audit Office seem to explicitly state that Treasury had not acted in the best interests of the state, and implicitly that it acted in the interests of the financiers. Key then denied that the report said any such thing, and that was the end of it. Nice try on that Labour, and all the other statistic-based questions that have got brushed off by National.

So, Chris, tell me, who are the "working class" now?

This morning Julia Gillard was on the radio dismissing calls from Australian Unions to axe free trade agreements where Australian jobs would be threatened. As in New Zealand, The Labor leader admonished that the unions didn't realise the opportunities presented by free trade due as a result of extra consumers who would want to buy Australian products... the same justification advanced by Phil Goff.

Labor's leadership fundamentally believes that a deregulated economy, free from restraints on business, produces prosperity. In that mind-set, the very concept of asserting collective power over "free" business becomes detrimental and the philosophical basis for the labour movement (and parties) to exist disappears.

Maybe, as the world moves full circle, it’s fitting for the clearest criticism of the present to come from the past.

"...you criticise the Labour Party for some of its sins; but to my mind their worst sin is creating a god, naming it free trade, and then worshipping it."

Voting tribally - that is, realying on your parent's and your communities judgment - is no more stupid (and probably a lot wiser) than voting for John Key "because he is nice man".

and if you need more education, try visiting a Housie evening - or your local RSA.

I remember reading that piece when you first posted it and thinking how spot-on you were.

Most of the people at the RSAs and Housie are usually elderly workers who are sociologically (and self-consciously) working-class in a way that younger "workers" mostly aren't. The is a huge gap between those people and subsequent generations.

In my campaigning for the Left and in daily life I have met lots of people who would fit into the categories you identify in that piece who see themselves as middle-class and aspire to be upper middle-class. It seems to me what matters is how people see themselves and their aspirations, rather than what they are.

Very few blue-collar people I know (and I know many) actually identify as working-class. Beneficiaries are about the only group of people I can tell who are likely to have any kind of class awareness at all, but large numbers of them will vote for John Key because he is "cool".

Bullying is commonplace in just about every workplace any of my family have ever worked in, and often in the form of a manager.

Constructive dismissal of employees who don't submit to the desires of management is routine. I know of a Harcourts where this happened in the last month.

I know of numerous cases of farmers treating their employees illegally, but most of them never get taken to court.

In Canterbury the CDHB is restructuring its mental health services despite the fact that many of its employees have suffered badly the the earthquakes, and so is the City Council, and the workers have no way to stop it - they have to take it.

I know of a garage owner that wouldn't let his workers go home after the Feb 22 earthquake and made them get back under cars.

I have dealt with several students who have been treated appallingly by the retailers they worked for, including being denied hours illegally and having them changed illegally and without notice. Rebel Sport being one guilty party.

The list is a long as a piece of string...

I accept that what you say is true. It appears that you have first hand experience working in these environments.

If I can make a couple of observations. One is that some of your concerns relate to the behavior of management. I'm sure you will agree that poor management practice is not unique to Capitalist or market economies. No doubt work place bullying exists in Socialist and Marxist economies.

The second is the effects on staff of 'restructuring'. Again, restructuring is not unique to Capitalist or market economies.

Finally, you quote two instances of illegal behavior on the part of employers. Really this proves my point. Their behavior is illegal, and therefore not sanctioned or approved by the Capitalist market economy of the 21st century. The employees in question have an opportunity for redress before the law that protects their rights.

I have not found anything in your post that causes me to revise my belief that market economies provide the most wealth for the most people of any economic and structural system devised by mankind throughout human history.

@Brendan. You don't seem to be aware at how the power is stacked against workers even when the law is nominally on their side. Low-wage workers don't have the skills, the time or resources to be able to defend themselves from abusive employers without strong unions.

With high levels of unemployment and low levels of unionisation there is always a scab waiting in the wings to take your job if your boss decides to make things hard for you. There's not much point in $10K compensation when you need another $25K to pay the mortgage, either.

Markets distribute consumer goods very well, that is true. Free market capitalism that is restrained by democracy is far better than any other method of distributing wealth because the market and the state place constraints on one another. However, what we have today is not a market constrained by democracy, only democracy at the mercy of finance capital.

So, when the finance sector causes a global recession workers lose their jobs and the poor are denied the help they need, while banks are bailed out to the tune of trillions of dollars.

In capitalism unrestrained by democracy, it is always the poor, working or not, that bear the brunt of economic calamity.

Capitalism has been so successful, the socialists have to bail it out, on average every 13 years.