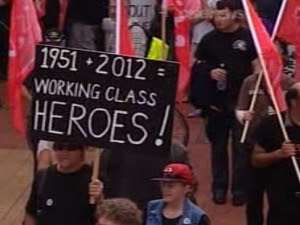 Well said, Mr Trotter. Why is this post "exclusive to Bowalley Road"? It should be printed by the papers that take your column And by the way, I think your mana gained lustre from your March 7 column. "STEADY, COMRADES, STEADY. This is the worst they have. This is all they’ve got left. After this, they have nothing. So, hold steady, comrades, hold steady."

And tremble, scabs; and we who for whom the cock had crowed thrice: for ours is the deserved vault, the gnashing of teeth.

No it's not over yet. Stand firm and gird loins: 90,000 leaflets have but bruised the high priests. Expect massive media retribution and respond instantly with irresistable vim.

The "strategy" of including wharfies families in publicity countering the POAL spin during this dispute is hardly 'rocket surgery'. Couldn't have been more obvious really.

Maybe this demonstrates that the union movement, and the left generally needs to embrace equal input from 51 percent of the community, and that a robust women's movement, far from being an impediment to the progression of the left, is an essential component of it.

I wasn't surprised to see that NZ's biggest feminist blog, 'The Hand Mirror' strongly supported MUNZ, and that every feminist I know in Auckland attended the march.

Chris, I think the stuff you have written on this dispute has helped to generate public sympathy, but I don't really buy the argument that public opinion stopped the government backing the POAL. The trouble is it’s pure speculation that the government was hovering in the background getting ready to step in.

In fact, the public sentiment has been more sympathy than support; the sort of response people have when watching a starving child in Africa and then flick channels. Unless the public were willing to mobilise it is doubtful the sympathy played much of a role. Contrast that to the Government backdown on mining when 20,000 people took to the streets. To be decisive the public would need to engage along the lines you suggested a few weeks back, by forming community pickets.

I think the old fashioned union action - namely striking, holding up ships and giving to strike funds to enable the strikers to hold steady is what has been decisive so far. That's what's caused the exporters and importers to jump up and down, not postcards and slick PR.

Well done to all Wharfies supporters mentioned. Lets hope the linking up of struggles and lockouts continues-sharing the donation numbers, visiting other sites etc. Back in the 80s in South Auckland a number of the bigger sites had virtually permanent $5 per head per week collections levied on union members to support other workers in the area.

It is surely time too for a consumer TalleyBAN and more attention to be put on AFFCO lockouts imposed by the dirtiest filithiest employer militants in food processing if not the country.

Interesting to see how truly degenerate Rob Campbell has become. I always thought him to be a supreme egotist and just toying with his trade union involvelment as long as he could sit at some top table with Ken Douglas, the Distribution Workers Fed or whatever.

The other phenomenon of the ‘5000 march’ was the on the ground co-operation between Māori and pākehā groups since the advent of Te Mana. As you point out international solidarity action was not a major consideration for POAL. Heh.

Funny, Tiger Mountain, that's exactly the same impression I got of Campbell - after I saw him test driving flash cars 30 odd years ago.

Lol at people who think you need to be a woman to understand that families are a PR strategy for disputes or that this is some sort of novel tactic or that it was primarily co-ordinated in the MUNZ dispute by women. lol lol lol

I was one of the 5000 marching that day. I have no union affiliation nor have I been actively part of any political party. Although I work in a highly paid professional position in the middle of the CBD, my family come from humble Samoan beginnings. But I wanted to march, not only with the other 5000 people, but also with my wife and 6 month old daughter. Perhaps I was persuaded by the very images Helen Kelly dispersed through the PR campaign... but for me, it has always been about working families. The wharfies are working families, the same faces I see in my own family history. Well done to MUNZ! (BTW the Sunday programme had an interesting piece on the dispute last night)

They have done well. From now on all union activity must be accompanied by community activity. All good progressives need to step up and support them. Our community depends on this ...

"Chris, I think the stuff you have written on this dispute has helped to generate public sympathy, but I don't really buy the argument that public opinion stopped the government backing the POAL. The trouble is it’s pure speculation that the government was hovering in the background getting ready to step in. "

Oh, I think it really focused the government's attention. They are so incredibly poll-focused that I doubt they blow their noses without first consulting the Great Focus Groups Oracle.

And truth to tell - what could Key - the "Real Kiwi Blokey Poli" do, without that carefully crafted image of him melting away, to reveal -? An alien lizard creature (ie, a Right Winger) bound on an evil mission to enslave humanity.

Key's teflon coating has been scrapped away, as evidenced by his poor performance on Q+A, yesterday. He doesn't need a wholesale street rebellion to destroy his government entirely.

But the thing that I found really interesting - and I hope Chris passes this along to the CTU - is that the Trade Union is moving with the times. Using PR campaigns may appear to be propaganda, but perhaps we need to fight fire with fire. The Right has used propaganda to sickening good effect - it's time the Left got with the 21st Century and used all the modern tools and techniques available to fight the good fight.

The impression I am picking up, as a social subtext, is that the New Right is waning. Judging by the hysterical anger on some of the more feral right wing blogsites - they can feel the change in the air as well.

One of Sun Tzu maxims; “give your enemy a golden bridge and they will use it” – don’t write off the POAL yet. Before you get too smug Chris the low productivity of the ports working only 26 hours a week is costing Auckland rate payers 8 million a year, when a new agreement is reached it will be vastly different much in favour of the POAL.

A victory for MUNZ is off the back thousands of other workers on the minimum wage, while an elitist 300 prevail. Whoops, I forgot some socialists are more equal than others – George Orwell got it right.