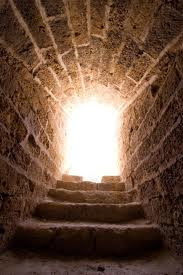 The Tomb Was Empty
“THAT’S QUITE A STORY, Marcus Petronius.”
My sergeant was a big bear of a man in his early 40s. He’d been soldiering for more than fifteen years and still had ten to go. He was a true Roman; the son of a butcher from the Transtiberium district. It was a lineage he used to good advantage with raw recruits. “Never been afraid of blood and guts!”, he’d bellow. “Been around them all my life. So long as it’s not yours, you’ve nothing to fear from the contents of a man’s belly!”
That was Antonius Caedere – whom some called “The Rock”. Because he was a rock. The sort Rome’s enemies broke on. A man to put your back against when things got ugly. Solid, dependable: a real soldier.
“How did you come to be guarding a Jewish corpse in the first place? Last I heard you were on crucifixion duty.”
“That’s right, Sergeant. Up on Golgotha. Two thieves and a political – nothing special.”
“So, what happened?”
“Well, it’s hard to say. The Governor’s guard had beaten the political pretty bad. Some wag had even woven him a crown of thorns – called him “King of the Jews”.”
“Risky title, I would have thought.”
“Yes. I think it’s what got him killed. Some Jewish legend about the coming of a mighty king – the ‘Messiah’. You know what these people are like. Anyway, their High Priest, Caiaphas, thought it safer to be rid of him and handed him over to Pilate as an enemy of the Emperor.”
“An even more risky title. Did he die well?”
“He died quickly, I can tell you that. Cried out for his father, which was a little odd, because usually all they want are their mothers. Still, the two thieves were very much alive, so our job was far from done. The hours passed, the day was wearing away, when this wealthy Jewish fellow bustles up with a message from Pontius Pilate, no less. The duty officer reads the message, frowns, reads it again, and then orders Cassius and me to cut the dead political down and hand him over to this Jew for burial. When we’ve done this, the officer reads the message over again and orders us to go with the body and stand watch over the burial tomb until relieved.”
“You were absent without leave for two nights, Marcus Petronius. You and Cassius Gaius. Guarding the corpse of a dead Jewish political? Two nights, and no one relieved you?”
“Well now, that’s the thing. Someone did relieve us. An officer.”
“Who?”
“I didn’t recognise him, Sergeant. Neither did Cassius. Strange. I thought I knew all the officers in the Jerusalem garrison. Not this fellow, though. He was very tall, wore a white cloak that seemed to shimmer in the dark, and spoke so softly we could hardly hear him.”
“And he relieved you? An officer relieved a couple of privates?”
“It’s hard to explain, Sergeant. He didn’t seem to be alone. Both Cassius and I got the impression that there were others present, in the shadows. Though we couldn’t really see them – it was so dark.”
“And what did this ‘officer’ say?”
“He just said they had come for the one who was in the tomb. He smiled at us. It was the uncanniest thing. I remember exchanging glances with Cassius – and the rest is just a blur. Cassius said there was a blinding light, but I think it was just the rising sun shining through the leaves. Because it was morning, Sergeant, and the great round stone that we’d rolled into its slot at the mouth of the tomb was lying in pieces on the ground – like a broken egg. And the tomb gaped wide – like an open wound. And Sergeant, it was empty.”
“Like I said, quite a story. And you know I’d have the hide off you both if I hadn’t heard a very similar story not two hours ago from a member of the Sanhedrin. He left me gold in return for my – for our – silence in this matter. So, we’ll say no more about it – ever. And if anyone asks what happened to the political, you tell them that his followers came in the night and stole his body away. Is that clear Marcus Petronius?”
“As the risen sun, Sergeant.”
This short story was originally published in The Otago Daily Times, The Waikato Times, The Taranaki Daily News, The Timaru Herald and The Greymouth Star of Thursday, 5 March 2012.
Posted by Chris Trotter at 16:00

What a nice folk tale.

You have a gift for telling a familiar story from the perspective of the minor players.

Thanks for that Chris

Not a folk tale, but hope and life.