Who Is "Everyone"? Some Thoughts On The Superannuation Debate 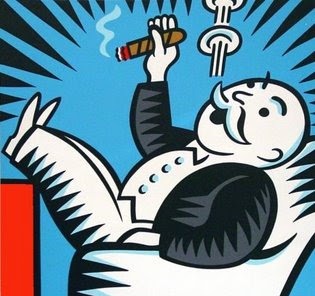 Tout le Monde? - C'est Moi! At the core of the current "debate" about the sustainability of NZ Superannuation are the same forces that have dismantled so much of the welfare state already: the forces of domestic and global finance. All the more curious, therefore, that Labour should be lining up behind them.

MY DAUGHTER AND I were driving back from the mall Saturday afternoon, listening to the news on the car radio. “Everyone” was saying that New Zealand’s superannuation scheme was in trouble. “Everyone” was similarly in agreement that the retirement age would have to be raised from 65 to 67 years. “Everyone” was also absolutely convinced that if this didn’t happen soon the whole scheme would become unsustainable.

I remember saying to my daughter: “Whenever you hear a news bulletin like that you should always ask yourself who this ‘Everyone’ is.”

“Everyone” certainly does not include a clear majority of New Zealand’s political parties.

The governing party, National, is resolutely opposed to making any changes at all to New Zealand Superannuation. NZ First is equally adamant that there should be no change – unless it involves lifting the percentage of the net average wage paid to superannuitants from 66 to 68 percent. The Green Party, likewise, opposes changing the scheme. Ditto for Mana and the Maori Party. (Indeed, given Maori New Zealanders’ lower life expectancy, they believe the eligibility-age should be lowered – not lifted!) United Future also supports keeping the age at 65, but proposes that citizens be encouraged to remain in the workforce a little longer, and uplift their super’ later at a higher rate. Or, retire earlier, but at a lower rate.

The only major party currently advocating increasing the age of eligibility (from 65 to 67) is the Labour Party. In this they are supported (albeit very quietly) by the tiny, far-right, Act Party.

Labour justifies its position by pointing out that in just a few years New Zealand will be spending as much on superannuation as it does on education. What a curious argument. Why would a social-democratic party be suggesting that the state should spend less on its older citizens than it does on the young? We can only hope that Labour’s strategists are not planning to turn the younger voters of Generations X and Y against the “selfish” Baby Boomers. David Shearer hasn’t quite accused this latter group of “intergenerational theft” – but that’s the electoral logic of his position.

Having established that “Everyone” does not include most of the country’s politicians, let’s take a look at who it does include. Perhaps the most significant member of the “Everyone” group is the Retirement Commissioner, Diana Crossan. Charged with providing the Government with “independent” advice on retirement issues, the Commissioner’s views should, on the face of it, be accorded considerable weight.

The only problem with being guided by the Retirement Commissioner is that her views on this crucial matter are starkly contradicted by a significant number of economists – including those working for the OECD. As these economists indicated in their recent survey of international retirement policies, New Zealand’s superannuation scheme compares extremely favourably with all those operating in the 34 “First World” countries it covers.

Right now, in 2012, our scheme absorbs less than 5 percent of New Zealand’s GDP – that’s about half the amount spent by the other OECD countries. Yes, it is going to rise as the “Baby Boom” generation reaches retirement age, but only to the percentage of GDP most wealthy countries are paying right now. New Zealanders should be very proud of their scheme, which is not only extremely cost effective, but also ensures that all our elder citizens are entitled to a level of income security unsurpassed anywhere else in the world.

So why is our Retirement Commissioner crying “Wolf!” on the cost and sustainability of the New Zealand scheme? Perhaps Ms Crossan’s views have been influenced by her former employer – the financial institution which started out as the Australian Mutual Provident Society – now known as AMP. This massive financial institution merged last year with AXA Asia and Pacific Holdings, and just under half its shares are held by HSBC, JP Morgan and Citigroup.

And that’s the scary thing. When you dig into the people and institutions making up “Everyone”, you discover that just about all of them, in one way or another, are bound up with vast financial corporations, all possessing a powerful vested interest in wrenching the provision of citizens’ basic retirement income out of the hands of the state and into their own, private, talons.

As is so often the case, these vast corporate bodies, working through their highly skilled and fearsomely resourced PR organisations, have contrived to create an apparently genuine consensus that change is both necessary and inevitable. So successful have they been that, in a recent TV3-Reid Research poll, nearly two-thirds of New Zealanders dutifully regurgitated the opinion, force-fed to them by the finance industry, that the eligibility-age for National Super should rise from 65 to 67.

“Everyone” does not believe superannuation is unsustainable, but repeat the lie often enough and everybody just might think it’s true.

This essay was originally published in The Press of Tuesday, 19 June 2012.
Posted by Chris Trotter at 11:16

A really great article, I had been wondering who 'everyone' was myself.

Summed my thoughts up in a contra-blog, Chris ;)

I hope someone in the mainstream media will pick up your message and do some honest research instead of blindly repeating the bullshit from the finance industry and their tame Labour party.

Top effort. It is also worth asking the question.
Would Labour be bothering with this if it was not for Key drawing a line and offering to quit if "he messes" with national super? A line he drew to shut down the shrill scaremongering by Labour pre 2008.

Nothing suits politicians and other powerful figures more than to have the people attack one another instead of attacking them.

There is another little issue nobody in Labour seem to comprehend: massive levels of under 25 unemployment. If the oldies need two more years employed their will be less work for the young. We will pay the dole to them and not the pension to the working oldies. All this debate proves to me is how vacuous and vacant Labours policy advise is. Its what one might call a "Pagani".

Pretty standard poor journalism that is sadly the norm nowadays. Never let facts get in the way of the headline.

Actual analysis and checking of sources is no longer affordable or even seen as of value as it doesn't sell.

The baby boomers were once babies and the cost to the state was huge. The State had to provide hospitals, kindys schools teachers etcetc. It was an ever increasing cost before they started working and paying taxes. Now they are an ever decreasing cost. As each dies, and they all will, that cost gets less

Yes, and then Chris says
' we should be proud of the super scheme'.
When any body, or everyone tells me I should be proud, or I should do this and think this, I ask why. And the answer is I should because Chris from the far left thinks I should,