"The Defining Challenge Of Our Time" 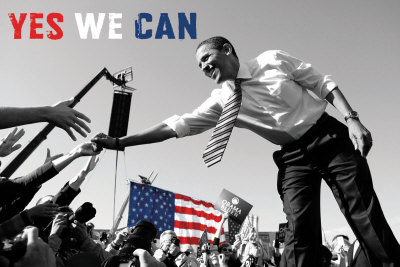 Progressive Populism: Barack Obama's promise of collective empowerment was crucial to his 2008 election victory. On 4 December he signalled that combatting economic inequality would be the motivating theme of the Democratic Party's 2014 bid to reclaim control of the House of Representatives. If our own David Cunliffe was wise he would make the fight against inequality similarly central to Labour's 2014 election campaign.
2014 IS NOT ONLY an election year in New Zealand, it is also the year of the “mid-term” elections in the United States. In both countries the debate between Left and Right will be focus on rising economic inequality and what, if anything, should be done to reduce it.
Speaking to a meeting of the Centre for American Progress in Washington DC on 4 December, President Barack Obama described economic inequality as “the defining challenge of our time” – immediately touching off a spirited debate, not only between liberals and conservatives, but between the moderate and radical wings of his own Democratic Party.
The rhetorical struggle on the American Left, will be over whether or not the term “economic populism” is presented as being a good thing or a bad thing. The Democratic Senator for Massachusetts, Elizabeth Warren, has seized the initiative by boldly laying claim to the progressive legacy of American populism – a tradition enthusiastically endorsed by the Nobel-Prize-winning economist, Paul Krugman, who ended a recent New York Times blog posting with the words: “go populism go.”
The debate in New Zealand has yet to reach this level of noisy excitement, but within the Labour Party a similar struggle between moderates and radicals is underway.
At the Party’s annual conference, held in Christchurch in early November, the impetus towards economic populism was readily apparent. Ordinary branch members and the party’s trade union affiliates, fresh from their triumph in the leadership primary, were keen to rally Labour’s traditional support-base around a populist banner.
Significantly, their calls for a rethink of Labour’s policy of raising the age of eligibility for NZ Superannuation to 67, and for Labour to distance itself from the Trans-Pacific Partnership Agreement (both of which fall squarely under the rubric of economic populism) were finessed away by party bosses behind-the-scenes.
The biggest stumbling blocks to a campaign based on economic populism are Labour’s economic spokesperson, David Parker, and its trade spokesperson, Phil Goff. Both of these senior Opposition politicians believe that if Labour is to win the 2014 General Election, then it must present a moderate and responsible face to both the electorate and (perhaps more importantly) to the country’s opinion leaders.
Both men subscribe to the view that elections are won or lost in the middle-ground of politics, where men and women of moderate opinions congregate. Without the endorsement of these moderate voters, runs the argument, a change of government will not happen.
At work here is a powerful sub-text in which political moderation is conflated with the middle-class. If only by implication, the Right associates economic populism (which it regards as a form of extremism) with politicians purporting to speak for working-class voters and beneficiaries.
And this produces another, more sinister, twist to the idea of the “Moderate Middle”. In both the USA and New Zealand, the non-white population is strongly over-represented among low-paid workers and beneficiaries.  It does not, therefore, take much to persuade the mostly white middle-class voters of either country that economic populist policies designed to uplift Blacks and Latinos, Maori and Pasifika, can only be implemented at their expense.
The unacknowledged racism inherent in the strategy of appealing to the “Moderate Middle” forced Barack Obama, the Democratic party’s first black presidential candidate, to pursue a strategy of going around the white middle-class and mobilising those Americans least likely to participate in the electoral process: young people and poor people.
The extraordinary power of his campaign rhetoric in 2008 – his famous “Yes We Can” slogan – was designed to persuade those alienated and marginalised citizens who habitually dismissed politics as having nothing in it for them that – this time – they could make a difference.
And once they were “in” the electoral process, the Democratic Party’s extraordinary political machine made sure that they remained accessible to President Obama’s appeal for a second term. The Democrats ability to identify and mobilise an unusually large proportion of their 2008 vote was a crucial factor in Barack Obama’s defeat of Mitt Romney in 2012.
And now the President’s party is preparing to mobilise those same voters by presenting the 2014 mid-term elections as an opportunity to strike a blow for economic equality by helping “progressive populist” Democrats reclaim the House of Representatives from the far-right “Tea Party” Republicans.
If Labour is to retake New Zealand’s House of Representatives it needs to learn from the Democratic Party’s example. A strategy based on competing for the support of the Pakeha middle-class will do nothing to mobilise the 750,000 mostly young and poor voters who sat out the 2011 General Election.
Only an unashamedly populist campaign that declares “Yes we can eliminate economic inequality in New Zealand!” offers Labour the slightest hope of convincing the young and the poor that by casting a vote in 2014 they, too, can make a difference.
This essay was originally published in The Press of Tuesday, 24 December 2013.
Posted by Chris Trotter at 09:55

I'm not sure that Obama was forced into his economic position. He seems to be firmly in the "new Labour" camp. Even allowing for the fact that the Republicans in Congress have been shamefully uncooperative, he has basically done nothing for the poor. Less in fact IMO than Lyndon Johnson. If I could vote in the U.S. I would be agitating for Warren is the next president, without a doubt she has more intellectual depth than just about anybody in politics today.

"The biggest stumbling blocks to a campaign based on economic populism are Labour’s economic spokesperson, David Parker, and its trade spokesperson, Phil Goff. Both of these senior Opposition politicians believe that if Labour is to win the 2014 General Election, then it must present a moderate and responsible face to both the electorate and (perhaps more importantly) to the country’s opinion leaders."
If that is what Phil and David think then god help New Zealand. We need a bold Labour Party. A party that is concerned for all the people in New Zealand not one that is frightened of the middle class or the Countries' "opinion leaders". They, if what you mean is the journalists of New Zealand's newspapers, have always been against us and the Labour Party has always had to deal with them. David and Phil need to get a spine.
And if Labour was really concerned about jobs they would lower the retirement age and not provide superannuation to those who continue to work and take jobs from those younger than them.

As the first person to mention Elizabeth Warren on this website (just after the 2012 election), do I get a chocolate fish for the New Year?

Warren won't get the nomination probably though. It'll go to Clinton, who has certainly improved since she pulled her head in and got down to some work, and is certainly a damned sight brainier than her husband, but still very "new Labour". Warren isn't that left by world standards but not bad by American :-).

My impression is that Warren won't run if Hillary is a candidate for nomination.

But I'm not convinced Hillary will run as she'll be even older than Reagan when first entering the oval office.

I must confess, Hillary is being coy about the whole thing. I think she still judging her chances. And I don't think age would stop her, let's face it women live longer than men :-).


The New York mayoral election is a further sign that the Liberal(in the US sense of the word) tide is rising in urban America.

Yes, as you point out in one of your other recent blogs, most active voters will already have decided who they will vote for. Both Labour and the Greens have to target those who didn't vote last time.