Sufficient Unto The Day

Short-Term Goals: Human-beings have always suffered from its tightly constrained time horizons. We are extremely good at working out how to hunt and kill the next mammoth, but not at asking ourselves what will happen when the last mammoth is killed.
WHY IS IT that nothing seems to work anymore? Problems assail us at both the local and the global level but there are no solutions. Politicians talk. World leaders gather – as they did last week in Brisbane for the G20 meeting – and , still, we are no better off.
How is that human ingenuity can place an object on a comet travelling faster than a bullet half-a-billion kilometres from Planet Earth, but is unable to protect the helpless populations of West Africa from the Ebola virus?
Human-beings obviously possess the smarts to solve their problems. Why, then, do they not possess the will?
The anthropologists tell us that the answer lies in the human species’ tightly constrained time horizons. We’re extremely good at working out how to hunt and kill the next mammoth, but not at asking ourselves what will happen when the last mammoth is killed.
Despite its obvious shortcomings, humanity’s short-term thinking remains deeply imbedded. Indeed, the idea of living in the moment has been identified by humanity’s greatest religious teachers as the only sensible response to the reality of our mortality.
“Consider the lilies of the field,” said Jesus of Nazareth, “how they grow; they toil not, neither do they spin: and yet I say unto you, that even Solomon in all his glory was not arrayed like one of these ….. Take therefore no thought for the morrow: for the morrow shall take thought for the things of itself. Sufficient unto the day is the evil thereof.”
Of course, in 30AD neither Jesus, his disciples, the Mediterranean world, nor even the planet itself, was faced with the twin threats of anthropogenic global warming and imminent resource depletion. Galilee and Judea were famed for their bountiful harvests. So long as the sun rose, the rain fell and the Jordan flowed, what need had men to take thought for the things of the morrow?
There is much to be said for this approach, because when set against the impossibly long perspectives of geological time our lives are, indeed, ridiculously short. In the planet’s gaze, the entire span of the human species’ existence is no more than the flutter of an eyelid. Were we, through our invincible short-termism, to engineer our own extinction, Mother Earth would barely stir. (Other than to breathe a sigh of relief!)
And yet, even within the scope of their own brief lifespans, our forebears displayed considerably more perspicacity than the cluster of generations inhabiting the world of today.
The evidence of these previous generations’ future focus lies all around us. How else should we describe the parks and botanical gardens of our towns and cities which our great-grandparents bequeathed to us, if not in the felicitous phrases of Shakespeare’s Julius Caesar? All these things “hath left them you, and to your heirs for ever; common pleasures, to walk abroad and recreate yourselves.”
And should we not, likewise, give thanks to the politicians and planners who made possible the great hydro-electric schemes of the twentieth century? Without their faith in the future of this little nation, the skies of its major cities would be as befouled with the smog of fossil-fuelled power generation as Beijing’s.
And all those streets of sturdy state houses? How was it possible for a country laid prostrate by the most savage economic depression in the history of Capitalism to somehow summon up the resources to build houses for its homeless citizens? And why, if it was possible for the politicians of the 1930s to make housing affordable, is it impossible for today’s politicians to do the same?
Something has gone out of us. Some vital quality that the human-beings who built the Parthenon, the Coliseum, Chartres Cathedral, Brooklyn Bridge, and even our own Benmore Dam, possessed in abundance.
Yes, their eyes were fixed upon the future; but that was only the necessary first step. To look ahead at all, the inhabitants of the present must first believe that what they value most about their society – their civilisation – will not die with them; that it will go on into the future. Believing that, who would not hasten to construct the economic and cultural infrastructure that gives their most cherished values life? Why else would anyone build the Parthenon? Or the Benmore Dam? 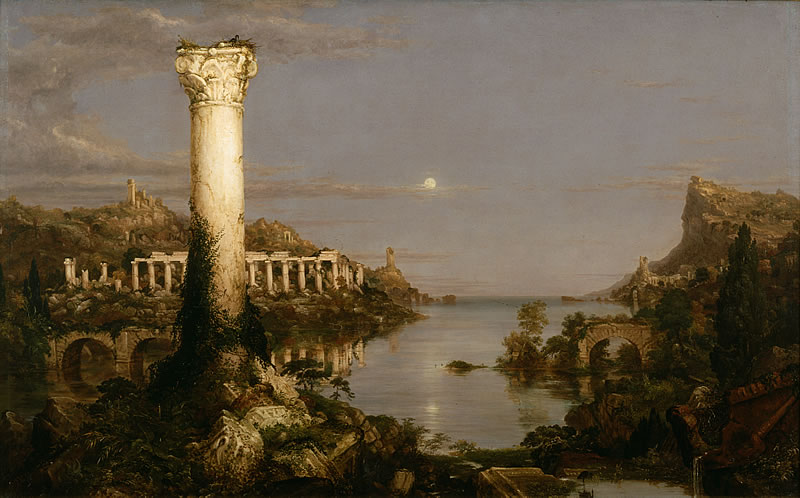 The Course Of Empire - Desolation. Painting by Thomas Cole, 1836.
Which can only mean that, if nothing works, and if our problems have become insoluble, then humanity’s ‘civilisation gene’ has somehow been switched off. Whatever peculiar mutation it was that rendered human-beings capable of thinking beyond the next mammoth, is fast becoming singularly maladaptive to the life-world of twenty-first century homo-sapiens.
Perhaps it’s our technology that’s undone us? Perhaps the emerging cyber-human has no need for pasts or futures? Perhaps, finally, we are approaching Nirvana – that concluding moment of human evolution when sufficient unto the day is the selfie thereof.
This essay was originally published in The Press of Tuesday, 18 November 2014.
Posted by Chris Trotter at 06:45

-"Something has gone out of us. Some vital quality that the human-beings who built the Parthenon, the Coliseum, Chartres Cathedral, Brooklyn Bridge, and even our own Benmore Dam, possessed in abundance."
I would venture to suggest that missing something is the backbone of socialism and the bane of capitalism and its name is "the common good"

Chris,
"And should we not, likewise, give thanks to the politicians and planners who made possible the great hydro-electric schemes of the twentieth century? Without their faith in the future of this little nation, the skies of its major cities would be as befouled with the smog of fossil-fuelled power generation as Beijing’s"

And notice that they have been sold when instead they could be used to back our own dollar.

Our own controlled media mindlessly joining in on the Putin bashing (Paddy "Oh he's leaving early" last night was over the top) bandwagon is just too much.

And while on Pepe here is a interview of Thierry Meyssan (who I have not read before) by Pepe http://www.informationclearinghouse.info/article40204.htm (scroll down to the video)

And finally there were some good comments in this thread (and more than enough good links) http://vineyardsaker.blogspot.co.nz/2014/11/the-key-sentence-in-putins-interview.html that I only had time to quickly scan this morning.

Chris, its nice to see you comment on the twin challenges of today, global warming ad resource depletion. You are a brave man to state this, because even if the message is true it will be received in anger. For any number of reasons, ranging from denial to hostility based upon hearing something that threatens personal status quo etc. In short you become Cassandra, the party pooper. You become the problem.

I dont disagree with what you ave said, to answer the challenge would in the best of all possible worlds would be that we strengthen our civil and community institutions and plan together. Our current greed, our avarice, our egocentricity all make this impossible. Fear for the day when this becomes obvious as our primal response is blame, not rational response.

The politicians of today are a useless rightwing bunch lacking real empathy for their fellow citizens. They are adherants to the new God - globalisation.

There are numerous reasons why nothing seems to work anymore.

But one that comes constantly to the fore is that the state has almost everywhere been decried, diminished and denuded of resources.

Ultimately, you get what you pay for.

We are all selfish. We all refuse to give up convenience. We all want rental properties. We all want new bathrooms with wall mounted vanities and lifestyles worthy of The Block. Especially the educated Left. We are doomed. I realised that a while ago. I gave up. I endure our demise by finding pockets of humour and kindred spirits in good long format TV writers such as david simon and by finding solace in good pinot gris. It is as hopeless as you say.

One might argue that the twentieth century was an aberration, and our civilization is returning to a more normal social structure.