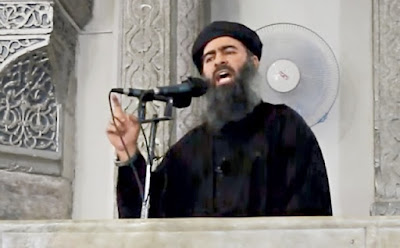 Dark Lord? Abu Bakr al-Baghdadi, self-styled Caliph of the Islamic State, preaches an apocalyptic version of Islam in which the allies and the enemies of God engage in a final, climactic battle, which, his followers believe, will signal the beginning of the end of this world. Through its terrifying use of wanton violence, the Islamic State hopes to draw the armies of the West into its very own version of Armageddon, at Dabiq, on the border of Syria and Turkey.
“THE WORLD CHANGES, and all that once was secure now proves unsure. How shall any tower withstand such numbers and such reckless hate?” The sonorous language of Tolkien’s Lord of the Rings seems sadly suited to this time of tragedy. When Paris, the City of Light, grows dark with suspicion. And the French people, prime movers and inheritors of the Enlightenment, stand mute with shock before the “reckless hate” of Islamic State.
What is it that these killers want? Merely to sow fear and uncertainty among ordinary Frenchmen? To demonstrate their disdain for the fighter-bombers of the French Air Force? To spit in the face of President François Hollande and all the other Nato leaders? Are these haters really as reckless as they seem? Are they truly heedless of the reckoning that must surely follow their bloody assault on the commonplace and innocent pleasures of civilised existence: eating at a restaurant; watching a football match; listening to music?
Of course not! There’s a ruthless method to Islamic State’s madness. A chilling logic that informs all their deadly deeds. Violence, cruel and obscene, is the Islamic State’s “Ring of Power”. (If I may be forgiven for drawing, yet again, upon the works of Tolkien.)
It is the savage allure of violence – religious and political – that locates the Caliphate’s recruits. Terrible images of beheadings, crucifixions, stonings and mass executions, delivered to impressionable young minds via the Internet. Violence as pitiless and unflinching as that allegedly visited upon Muslims by the accursed “Crusaders”. Violence which exerts a malignant magnetism upon the rootless and alienated children of Muslim immigrant communities scattered across the West.
Such is the dark magic that enthrals the terror-masters’ recruits and brings them, across thousands of kilometres, to the blood-soaked lands of the Islamic State. It is there that they learn the “rules” of jihad – holy war – and are bound forever to the dark purposes of Abu Bakr al-Baghdadi’s self-proclaimed Caliphate.
And what purpose might that be? In his article “What does ISIS really want?”, published in the March 2015 issue of Atlantic magazine, journalist Graeme Wood observes that there is a temptation, in the West, to conceptualise jihadists as “modern secular people, with modern secular concerns, wearing medieval religious disguise – and make it fit the Islamic State. In fact, much of what the group does looks nonsensical except in light of a sincere, carefully considered commitment to returning civilisation to a seventh-century legal environment, and ultimately to bringing about the apocalypse.”
The apocalypse! Yes. Islam, like Christianity, contains within its ranks a growing number of devout, even fanatical, believers in the “End Times”. According to the Islamic State recruiters interviewed by Wood, these end times will begin when the West launches what proves to be a disastrous intervention in Iraq and Syria. In Woods own words: “The Islamic State awaits the army of ‘Rome,’ whose defeat at Dabiq, Syria, will initiate the countdown to the apocalypse.”
If Wood is correct (and there have been many challenges to his characterisation of the Islamic State) luring the “Crusaders” to this little town on the border of Syria and Turkey is critical to the unfolding of Allah’s plan for his people. Dabiq may be 300 miles north of Israel’s “Mountain of Megiddo” (Har Meghiddohn in Hebrew) but its theological location is identical. It is held to be the place of the last, decisive, battle between the allies and the enemies of God – Armageddon.
But, surely, no rational person could believe that such a battle is anything other than metaphorical? No rational person, certainly. But, in the Islamic State we are not dealing with rational people.
Which is not to say that we are dealing with fools.
If one’s ultimate objective is to provoke the armies of “Rome” – i.e. the Western powers – into sending an expeditionary force to Syria and Iraq, then what better way than by launching a carefully planned and ruthlessly executed attack which left 132 Parisians dead and more than 350 wounded? President Hollande, anxious to play the role of France’s avenging angel, has already declared “a state of war” to exist between his country and Islamic State. He’s telling the French people that his response to its murderous attack will be “merciless”.
The Russian President, Vladimir Putin, whose reputation for ruthlessness and aggression is well-established, is already calling for a combined, Russian-Nato military assault upon the Islamic State. He is determined to avenge not only France’s 132 dead, but also the 224, mostly Russian, individuals who lost their lives when an Islamic State affiliate blasted their airliner to pieces over the Sinai Peninsula.
The effectiveness of Islamic State’s strategy of violence is eerily apparent in the current turn of events. As if the “reckless hate” of a real-life Sauron has, indeed, given him the power to rule us all.
This essay was originally published in The Press of Tuesday, 17 November 2015.
Posted by Chris Trotter at 10:32

The humadness of course goes back more than two thousand years. We have the iteration of it, but still without rationality.

And what better than the bit about Putin to show that. "He is determined to avenge not only France’s 132 dead, but also the 224, mostly Russian, individuals who lost their lives when an Islamic State affiliate blasted their airliner to pieces over the Sinai Peninsula."

Poker faced Putin? I'll see your 132 dead in France, 224 over the Sinai Peninsula and raise it to 283 over eastern Ukraine Putin?

Chris, are you aware of the previous Wahabist attempt to set up a Caliphate? They raised a movement with Saudi allies in the 1830s and captured Mecca and Medina. Their then mistake was to become iconoclasts and violent nasties against the people of the region, culminating with declaring the Ottoman sultan apostate. Of course the Ottoman army came and re-established order with some severity. History never repeats but it does mirror.

They are definitely not fools. Part of their aim is to provoke a reaction on the part of the French government, because every time they crack down on innocent Muslims at home, and every time they kill innocent Muslims abroad Isis gains recruits. Classic, since at least the time of Mao. There are also young, and running rings around governments on the Internet. We – using the word loosely – on the other hand seem to have learnt nothing from Vietnam. And before anyone says it I'll say I don't know what the answer is. But I'm damn sure it's not what we're doing at the moment.

Instead of being apolgists of the Islamic brew of ideas the west should mount a campaign of attacking Islam with critical analysis. We would soon see what we would see.