A Stranger Kind Of Magick. 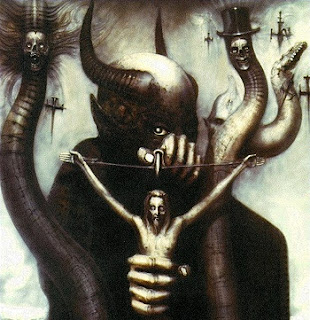 "Social Credit" economic policy rested on two main planks: (1) getting rid of fractional reserve banking and placing the creation of money solely in the hands of the crown. and (2) introducing an unconditional basic income (UBI), which Douglas called a "national dividend" Both of these ideas are still reasonably popular today, though no longer associated exclusively with Social Credit.

The third idea which Douglas put forward was the A+B theorem which very few people understood, and which was almost certainly invalid. It was this idea I think which gave social credit its "crackpot" image. However the A+B theorem was an attempted explanatory theorem only and would not have affected the imlementation of the two policies above.

Well, when the World Bank is saying that austerity doesn't work, it's probably time to abandon the experiment. Never mind how many lives it's ruined, never mind that it trashed the economy for any number of years after it was introduced, and never mind apologising. They rarely do.

Neo-liberalism was, like Magick and Social Credit, a "travelling theory" (a term popularised by Edward Said). This theory came to NZ via Mt Pelerin, Chicago and Pinochet's Chile.
The fervour that NZ's ruling class grasped onto this quackery is in inverse proportion to the weakness of the theoretical grounding of the left alternative (and the only other alternative to failing Keynesianism was on the left).
The fact that NZERS can grasp onto extreme solutions can give us some solace that someday they might embrace an anti-capitalist, pro-people and pro-planet socialist alternative.

I love the gorse simile .

Mikesh yes. The A+B probably killed S C and I think to understand it was to understand where it was wrong.
What killed the movement in it's tracks though was the Clide Dam Empowering Bill.

Chris " At the peak of its popularity in 1981, Social Credit’s share of the popular vote rose to an astonishing 21 percent"

(Interesting facet of SC = until Beetham conducted a thorough purge in the early 70s, SC had always included a core group of conspiracy-minded anti-semites among its activist base and office-holders. Not necessarily a majority, but at least a solid minority group)


Len Richards "The fact that NZERS can grasp onto extreme solutions ..."

Important to note that Rogernomics / Ruthernasia never really commanded majority support (the closest it came to voter approval was at the 87 Election but even then NZES data suggests outright support = minority sentiment). By the early 90s, opposition was overwhelming (even among National supporters).

You are wrong about Rogernomics and Chris is right. Rogernomics has been the dominant theme in the NZ economy for 35 years. Sure the rough edges have been knocked off by both Helen Clark and John Key. But neither turned their back on Rogernomics.

In essence Rogernomics involves an open economy, reasonable tax levels, completion wherever possible, a reasonable amount of privatisation in anything that operates in the market (power and telcos). And reasonable employment laws. The current legislation is adapted from the laws passed by Labour in 2000.

The political success of both Helen Clark and John Key is testament to the reality that NZer's by a majority prefer the overall Rogernomics solution, provided it applied in a reasonable manner.

You fail to mention that the country has had throughout the alleged neo period you are obsessed with trying to prove, a stonking great welfare state. And still has. Hardly neo at all, this rock star country, well governed by a Centre regime for 16 years now. Not neo at all.
Merry Xmas

Yes, a paid-off elite -- cash, and the unpublic idea of 'meritocracy'(versus the public ones of 'democracy' and 'freedom') to justify themselves.

'Meritocracy' is the real motor of elite justification since 1984.

And now with Trump they are proved morally bankrupt.

Yet there they ever sit, Chris.

Haven't got all the relevant data to hand, but I can assure you that the NZES survey figures show massive majorities of voters (of all partisan persuasions) were opposed to the privatisation agenda, to the core monetarist policy at the heart of Rogernomics / Ruthenasia (narrowly prioritising the reduction of inflation at the expense of increasing unemployment), while somewhat smaller majorities (including a slight majority of Nat voters) agreed that the wealthy should be taxed more heavily (ie supported a more progressive tax system).

All summed up in the NZES conclusion that voters, on the whole, rejected Rogernomics and its Bolger-Richardson successor, and that (in the 90s) it was highly ironic that National - the Party (mis) identified by significant numbers of voters in the 1990 NZES as being firmly opposed to Rogernomics - went on to take key aspects of the agenda even further.

Ever wondered why the Nats took such an extraordinary hit in the polls during the early 90s, Wayne. Ever wondered why they plunged a huge 13 points at the 93 Election or why Labour and the Alliance combined won more than half the vote ? (and that's leaving aside the anti-Ruthenasia NZF vote).

Come to think of it, ever wondered why Steve Joyce noted at the outset of the key Govt that the huge majorities opposed to any further privatisation (picked up in both Public polls and National's private polling) were really scary ?

Thanks swordfish. You save me a little time on Christmas morning. I think the essence of the Bullshit is this:

"In essence Rogernomics involves an open economy, reasonable tax levels, completion wherever possible, a reasonable amount of privatisation in anything that operates in the market (power and telcos). And reasonable employment laws. The current legislation is adapted from the laws passed by Labour in 2000."

Particularly the word reasonable. Something that is subject to many different definitions. A real political answer that Wayne. I guess it's to be expected, you being a politician. But Merry Christmas anyway.


Rogernomia , Wayne Mapp, involves a 'settlement' that needs the lower third not to vote. That cuts out the lower third. Not the NZ way. Happy for your upbringing, not for your heritage.

From the government of Lange I can only think of his second wife as right.

So much in the heart of Savage. Who denied his personal life for us.

The best Scot, an Irishman. I admit.