Us and Them: The Fatal Divisions of Exploitative Culture. 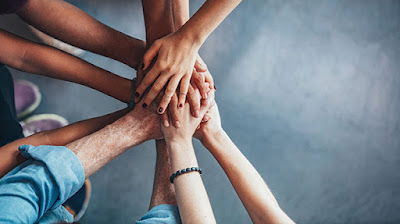 Us and Them: The trick to running a successful Exploitative Culture lies in defining who is – and who is not – a member of it. Or, to put it another way: who is included in the idea of “Us”, and who belongs with “Them”.
OURS IS NOT JUST A RAPE CULTURE: it’s a Kill Culture, a Rip-off Culture and a Lie Culture as well. But, rather than attempting to reconcile ourselves to living in a multiplicity of malign cultures, it is probably more helpful to think of ourselves as inhabiting a single Exploitative Culture. One in which human-beings are consistently treated as means to another’s end – not as ends in themselves.
The trick to running a successful Exploitative Culture, therefore, lies in defining who is – and who is not – a member of it. Or, to put it another way: who is included in the idea of “Us”, and who belongs with “Them”.
Generally speaking the smaller the “Us”, the greater the power. If you’re a member of the “One Percent”, for example, it not only means that you are obscenely wealthy and powerful, but also that 99 percent of your fellow human-beings are, in one way or another, exploitable.
Exploitation is always and everywhere associated with actual physical violence, or the threat of it. Without violence people simply would not consent to being treated as the means to someone else’s ends – they would rebel. Exploitative Culture (which is to say all culture) may thus be further defined as the organisation of, and the devising of justifications for, purposive social violence.
We thus return to “Us” and “Them”: which may now be thought of, respectively, as those who must be protected from the imposition of purposive violence; and those upon whom such violence may be inflicted with impunity.
Consider the current controversy surrounding “Operation Burnham” the botched, or exemplary (depending on whether you believe journalists Nicky Hager and Jon Stephenson, or the Chief of the New Zealand Defence Force, Lt-General Tim Keating) attack on settlements in the Tirgiran Valley in Northern Afghanistan.
What happened in the Tirgiran Valley could not have happened if its inhabitants were regarded by the New Zealand soldiers taking part in the operation as members of “Us”. To listen to Lt-General Keating deliver his media briefing on Monday afternoon (27/3/17) was to hear a man doing everything within his power to make sure that the men under his command continued to be regarded by the New Zealand public as “Us”; and that the villagers of the Tirgiran Valley, “the insurgents”, as he called them, were seen as “Them” – our enemies.
In the eyes of the New Zealand Defence Force (NZDF) Hager and Stephenson are guilty of engaging in the most basic prohibition of all Exploitative Cultures: attempting to redefine the meaning of “Us” and “Them”.
The whole purpose of their book, Hit & Run, is to make the reader see the victims of Operation Burnham as people like themselves: hard-working farmers; a trainee schoolteacher home for the holidays; parents and grandparents; a three-year-old girl called Fatima. And the more successful the authors are at transforming “Them” into “Us”, the more outrageous Operation Burnham seems to the New Zealand public.
The subtitle of Hit & Run refers to the “meaning of honour”. The reference shows considerable insight on the part of Hager and Stephenson, because the concept of “honour” is inseparable from what it means to be a soldier – a warrior.
The military virtues are all “hard” virtues: valour, prowess, discipline, loyalty. They need to be, because bodies of armed men, willing to inflict injury and death on command, are the ultimate guarantors of Exploitative Culture. Crucial to the success of these hard military virtues is the continual and favourable contrast provided by the justifiers of exploitation with the “soft” virtues of civilian life: wisdom, creativity, tolerance, solidarity.
Significantly, Exploitative Culture assigns almost identical combinations of qualities to the constructs of masculine and feminine. Strength and masculinity is pitted against weakness and femininity in what can only be described as the primal social dichotomy: the first and most destructive reduction of human-beings from ends-in-themselves to means-to-an-end.
For ordinary men to accept their subordination to stronger, richer and more powerful men, Exploitative Culture supplies them with their own inexhaustible supply of subordinates – women and children. And since there can be no exploitation – no power – without violence, the maintenance of this primal dichotomy is of necessity achieved through the unremitting application of physical and emotional coercion. Domestic violence, rape, child abuse: these are not just the products of the masculine/feminine dichotomy, they are also the most tragic expression of the “Us” and “Them” divide.
The non-consensual penetration of a young woman at a party; the invasion of a distant river valley by airborne special forces; both are symptoms of the same dreadful disease.
This essay was originally posted on The Daily Blog of Wednesday, 29 March 2017.
Posted by Chris Trotter at 17:27

Chris, I read your posting directly after reading this

and realised similarities where armed "troops" beat up the local unarmed "civilians".

In the Herald mentioned attack girls were present and doing the attacking.

Violence is inbred into all of us and age it seems is no barrier.

Wonderful column. Yesterday I gave to the collectors for Rape Crisis. I always give to the Womens Refuge. That is not unusual, so many of us regularly flipping a coin to a group who do good, a charity, an ambulance. All areas that need funding to attempt some redress for the ills of our society.

In a way that is distressing because there should in a wealthy society be no shortfall. In itself that is proof of the oppression Chris mentions.

I do however get an uneasy feeling with the causes I give to, not because of their specific worth but because of politicization by interest groups. Identity politics. For example I have very little regard for the latest wave of feminism, for their model of the patriarchy. Yet I will make common cause with my money, because as Chris says our whole model is exploitative,and we are all exploited.

You have a point Chris but surely it should be put in context.
The context is the entire existence on life on earth and boiling that down to here and now and us, I would argue that even though we are still part of nature, red in tooth & claw, were are kinder and gentler than at any time in the history of this planet. (For GS: source other than my own observations is Pinker)
But I guess your point is we could do a lot better, which is of course another truism.

Well, leaving aside the fact that Pinker has pretty much been comprehensively debunked, the point is not that we are killing each other less – even if it's true – but that we have initiated in many places in the Western world a hard right series of governments that are run by people that think poor people are to blame for their own situation, and if they can't keep up they should simply die. It's a soulless competitive environment, that doesn't even deliver on equality of opportunity, let alone prosperity. Particularly when you compare it with the postwar Keynesian environment, when people were happier and much more optimistic because if they weren't in possession of quite so much electronic stuff, they tended to have stable and well paying jobs. In those days people would have been too ashamed when asked what to do with people who can't afford medical care to scream out "Let them die."
Now these days weren't perfect for people who weren't white, male, and straight – but for looking after those less fortunate they have today beat into a cocked hat.