Moving Beyond Good and Evil: Can Gerry Brownlee Get Past America’s Moral Absolutes? 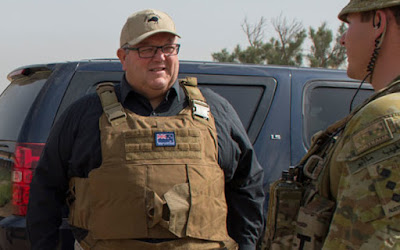 He Was A Big Man Yesterday - But Boy You Ought To See Him Now! Except, if Gerry Brownlee wishes to be taken seriously as New Zealand's new Minister of Foreign Affairs, he will have to stop looking and sounding as if he considers himself much too busy to think.
GERRY BROWNLEE’s rise began with a fall. Or, more accurately, with a push and a shove. It all happened at the launch of the National Party’s 1999 election campaign. Neil Able, a Native Forest Action “campaigner”, had attempted to participate in the event, and Gerry Brownlee, the first-term MP for the Christchurch electorate of St Albans, had used what a District Court Judge would later describe as “excessive and unnecessary force” to shut him up – and out – of the proceedings. Hardly the most auspicious of beginnings for the man Prime Minister Bill English today (24/4/17) introduced as New Zealand’s next Minister of Foreign Affairs.
Notorious among journalists for his tendency towards tetchiness, the words “Gerry Brownlee” and “diplomat” seem particularly ill-matched. The truly great foreign ministers of our history have all been thoughtful, measured and principled individuals. One thinks of Labour’s Peter Fraser and Norman Kirk, or National’s Brian Talboys and Don McKinnon. Bluster, bluff and belligerence tend to be associated with the portfolio’s also-rans. Brownlee will need to display a hitherto unrecognised talent for perspicacity, subtlety and tact if he is to be mentioned in the same breath as his more illustrious predecessors.
Of course, Brownlee could be aspiring to the same rogue status that attached itself to David Lange and Winston Peters. The former’s wit and verve, when combined with his Methodist lay preacher’s determination to “let justice roll on like a river, righteousness like an never-failing stream” allowed him to set New Zealand foreign policy on a new and bracing course. Winston Peter’s easy gregariousness and roguish charm, by contrast, drew New Zealand’s erstwhile American friends out of their Lange-induced aloofness and back into the warm waters of mateship.
To reach those giddy heights, however, Brownlee will have to stop looking and sounding as if he considers himself much too busy to think.
Interviewed by the breathless Corin Dann on last Sunday’s Q+A current affairs show, for example, Brownlee spoke darkly of the North Koreans’ “evil intent”. Clearly, the new Foreign Affairs minister does not subscribe to the idea that terms like “good” and “evil” are a profound hindrance to establishing fruitful international relationships. If a regime is designated as “evil”, then the moral scope for constructive engagement and dialogue is zero. Diplomacy works best when it is guided by empiricism – not metaphysics.
But an empirically driven foreign policy requires a minister who is not only in full command of the facts about his neighbours, but who is also determined to understand them. That presupposes a deep personal affinity for history and geography, science and culture, philosophy and religion. Nowhere is the French proverb tout comprendre, c’est tout pardonner (to understand all is to forgive all) of more practical use than in determining the most apposite response to the actions of nation states.
Sadly, that does not sound like our Gerry. As is the case with so many of his right-wing political brethren, the collapse of Soviet communism in 1989-91 and the Al Qaeda terror attacks of 9/11, have caused Brownlee to regard international relations as a grim global morality play in which the Children of Light (the US and its Western and oil-producing allies) are called upon to wage a ceaseless metaphysical struggle against the Children of Darkness (everybody else, but especially Russia, China and “Radical Islamic Terrorism”).
Viewed from this perspective, the world is a place in which the pronouncements of the United States – that “shining city set upon a hill” – are accorded the status of  holy writ. It is the “indispensable nation” that decides who is “Good”, and who is “Evil”, and against America’s judgements there is no appeal.
Under this peculiar diplomatic dispensation the United Nations Charter, the Universal Declaration of Human Rights, the Rules of War and the carefully constructed checks and balances of the UN Security Council are relevant only to the degree that they accord with the judgements of the United States. If they do not facilitate the expression of American will, then those affirming them must be condemned, ignored and, in the most egregious cases, punished.
In his guise as New Zealand’s Defence Minister, Brownlee exhibited every sign of wanting New Zealand to go on doing its bit against these “evildoers”. As far as Gerry was concerned, the global ambitions of the United States were in every case praiseworthy and true. Those who stood against them were not only her enemies – they were our enemies, too. And the only acceptable New Zealand response to an American command to “Jump!” was to ask: “How high up the Tirgiran Valley?”
We can only hope that the Minister’s transition from Defence to Foreign Affairs results in New Zealand having much less to do with excessive and unnecessary force, and considerably more engagement with the intelligent empiricism so vital to conducting a practical, principled and proudly independent foreign policy.
This essay was originally posted on The Daily Blog of Tuesday, 25 April 2017.
Posted by Chris Trotter at 13:01

That is a priceless article. How is that Hosking is a regular feature in the national debate, but you are not?

Hardly an intellectual steeped in 'history and geography, science and culture, philosophy and religion'.

The better foreign ministers tend to be polished types.

That sounds like us out there in the big, narrow world that we wish to live in. Our national news is half USA, half NZ crime and political stoushes, and a teeny mention of any notable world tragedies that we don't think we caused or aided. With that difficult affliction, tunnel-vision sight, we have to be led securely along the true path of self- righteousness. I think Brownlee will puff along perfectly in that role.

"Gerry is a former wood-work school teacher."
I never knew that. I don't take much notice of the man, but it wood probably explain why everybody I know thinks he's as dumb as a stump, or thick as 2 short planks. I must confess, I thought he was the idiot who rode his tractor up on the steps of Parliament buildings, but when I checked it wasn't. :)

Venture to say Chris, this is your best yet. As I began the read, I made a list of points to raise. By the end, all had been covered.
What a recipe for disaster. A Minister of Foreign Affairs with a trade-school education in History. We have passed the point where politicians pay even lip-service to fitness for office. Parliament is no more. We have adopted the American system.

What Chris is this Talboys conflation with principle? As a student I heard him at the Canterbury University staff club talk "justifying" the Indonesian invasion of East Timor. Forever damned in my book.

DevonportSpeculator
is speculating on why Hosking is well-known nationally. This may be because there are more people in the National Party who like to have someone tell them what to think, than who like to think and read, which results in further thinking. Hosk-ing and think-ing are two different things, Dev old boy, and never the twain shall meet!

"The truly great foreign ministers of our history have all been thoughtful, measured and principled individuals. One thinks of Labour’s Peter Fraser and Norman Kirk"

I may be wrong but I can find no record of Norman Kirk being foreign minister.
And Pinger Kirk was a former Stationery Engine Driver.It didn't stop him from being one of the deepest thinkers and most knowledgeable members of parliament NZ has ever had.

I think that Mr B will make a rotten foreign affairs minister, but why drag his previous career as a woodwork teacher into it? The attitude reeks of intellectual snobbery. Kirk was a stationery engine driver, Savage a brewery worker, most of the Labour Party before the expansion of university education were of Brownee's attainments or lower. Didn't stop them, despite what their university educated "betters"
thought.

TO: All those who doubt that Norman Kirk was his own Foreign Minister.

"Kirk was a stationery engine driver, Savage a brewery worker, most of the Labour Party before the expansion of university education were of Brownee's attainments or lower."
These guys often managed to educate themselves. I think when they were growing up there were worker education schemes all over the world. That's where my dad got some of his knowledge. The rest of it he got by reading widely, because libraries were free. It was a damn sight better read than I was until I hit my 40s. And you have to remember, that clever working class kids didn't always get a chance to go to university in the 1930s and 40s.

Have you noticed so many of the top posts in this National government are held by Catholics. There's a popish conspiracy afoot! Bill English, Gerry Brownlee, Paula Bennett. Or should I say, Paula Benedict? The Church of Rome never rests in it's plans for the subversion of free-thinking Protestant nations!