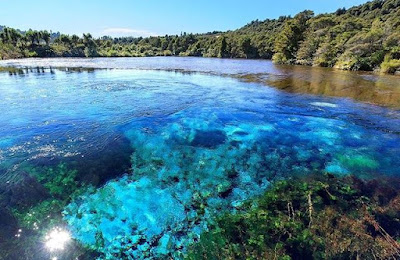 Worth Protecting? The threat to the nation’s water is real and it demands action. What’s more, the Water Issue comes with a whole cast of ready-made villains: someone to take the blame. Farmers.
WHO CAN FORGET that magic childhood moment when you first opened your eyes underwater? I remember mine like it was yesterday. I was splashing about in the Waianakarua River in North Otago. The first thing I saw when I put my head under the water and opened my eyes was a red and green “Pure New Zealand Honey” tin. So clear was the water that I could easily make out the bees and clover-heads printed on its surface. (Quite why the tin was in the river, which was otherwise blissfully free of litter, I never discovered!)
We all have memories like this of New Zealand’s rivers and streams. Those deep, clear swimming holes that family and friends frequented during the long, hot days of summer. It may be years since we visited them, but they feature prominently in our mental and emotional landscapes. They are places of the heart.
Which is why, when we hear about the extent to which New Zealand’s rivers and streams have become unswimmable, the impact is devastating. Whatever it is that’s polluting and degrading our waterways, it is also befouling our memories.
Understandably, these sort of emotional connections are tremendously concerning to the politicians on whose watch our waterways are being polluted. Be they central, regional or local government representatives, all are acutely aware that the “Water Issue” is not only one of the big Voter Motivators of 2017, but that it has also become a symbol of New Zealand’s entire beleaguered environment.
The devastations of global warming loom ahead of humanity – and that’s the problem. As a species we are notoriously prone to ignoring all but the most immediate threats. All of the measures which New Zealand (and a great many other countries) refuse to countenance when it comes to mitigating the effects of climate change would be adopted in an instant if we found ourselves at war. Indeed, “Victory Gardens”, compulsory re-cycling, and the strict rationing of fossil fuels were an accepted part of people’s everyday lives during World War II.
The threat to the nation’s water, however, is very much in the here and now. It’s real and it demands action. What’s more, the Water Issue comes with a whole cast of ready-made villains: someone to take the blame. Farmers.
And don’t they know it! The dairy industry is spending millions of dollars on public relations and advertising in an attempt to repair the damage done to the reputation of New Zealand farmers by the Green Party. The latter’s “Dirty Dairying” campaign, spearheaded by Russel Norman in the run-up to the 2014 election, turned urban New Zealanders off farmers in droves. Justified or unjustified, the connection between the vast expansion of this country’s dairy herd and the degradation of its waterways has been made. And all the beautifully shot images of salt-of-the-earth farming families walking their cows to milking in the dawn’s early light are not going to break it.
It gets worse. The National Party, which Labour’s Michael Cullen once described as “Federated Farmers at prayer”, is increasingly being identified as Dirty Dairying’s prime protectors and enablers. More and more voters are noticing that while the Department of Conservation has been wantonly downsized and cruelly starved of funding, the National-led Government has lavished hundreds-of-millions of dollars on irrigation schemes designed to further expand New Zealand’s dairy industry.
Put all of the above together with National’s refusal to enlist farmers in the war against global warming and the picture that emerges is not a pretty one. Clearly, the befouled state of our rivers and streams is merely the most visible and shocking evidence of an industry which has for decades traded environmental degradation for profit. It is just the tip of New Zealand’s rapidly melting environmental iceberg.
The real wonder of this year’s election is that the Greens have not made more of their former leader’s extraordinary political gift. It’s almost as if the party’s new co-leader, James Shaw, is frightened by the sheer intensity of public feeling against the role played by farmers in the ruin of our waterways. (Not to mention the giving away of New Zealand’s pristine springwater to foreign bottling companies!)
If future generations of young New Zealanders are to experience the joy and wonder of their wild water heritage, then today’s voters need to open their eyes.
This essay was originally published in The Waikato Times, The Taranaki Daily News, The Timaru Herald, The Otago Daily Times and The Greymouth Star of Friday, 30 June. 2017.
Posted by Chris Trotter at 09:25

The core of today's voters that support National already have their eyes open but have put up convenient economic shutters to blot out the view.

I suspect since the groundswell of opinion seems to be moving more to bringing a few of those shutters down the Federated Farmers prayer meeting people will end up in time just fading away like daylight at the dimming of the day.

Never a truer word re National Party at prayer. I remember well that acolyte of "free market" economics, Ruth Richardson promoting Supplementary Minimum Prices, and tax payer funded border dyke irrigation. No user pays for her, tax payer subsidies for her farmer mates. National have since inception enabled agriculture to line its pockets at the expense of the taxpayer directly, or the taxpayer indirectly as we all pick up the cost of farmer "externalities" aka polluted rivers. These grass miners dont just want to rape the environment, they want to steal the means from our pockets.

"Like it or Lump it"
There is some way to go yet before the election,
Who do I trust to manage over the next 3 years, starting 22nd September, this year.
Is it English and Joyce or Ardern and Robertson?.
Got the answer?.
I have, its English and Joyce for me, prudence with the economy against recklessness with the economy.
Economic recklessness creates economic wreak-lessness.
Labour is still tied to the Greens and are showing their arse to posturing King Winnie Peters who peddles and paddles in his own fantasies.
Labour are in his clingy paws but stay silent on his menaces to the well being of New Zealand.
Winnie Peters needs a good and proper muzzle over his mouth and arse, he will get no ticks from me.

Bullshit Nick.
I deal with a lot of farmers and they care about the environment as they live in it, breathe it and drink it. And they earn their living from looking after it. They are nearly all intergenerational. The farmers I know detest those minority of their colleagues who do not care. Any they are dealing with them.
The worst polluters in NZ live in the cities, where the pollution is worst.

And sorry Chris, I do not think the average Kiwi, who is of course a city dweller, cares a great deal about the environment. They care, but not that much. Poll them and you'll see. And watch what they do. They care about the price of petrol, not weather it is warming the planet.
So they do not vote according to the way you see it. They do not blame National for water pollution, as it is actually not political. The left pollutes as much as the right. That is why the Greens have been a failure. They are left and the environment isn't.

My Great Uncle lived out his retirement beside the Waianakarua, at Grave's Dam, and swum in it every day (even winter - Baptist minister that he was!). I go there now with my four year old son. We still put our head under but never gulp. But for much longer? What future for him and his children? Chris, I love the way you observe that polluting our rivers is polluting our psyches (memories, landmarks, present sanctuaries for reverie and togetherness), not to mention for those of us for whom rivers are living beings (tipuna, kaitiaki etc). May we be bold.