No Enemies To Labour's Left? 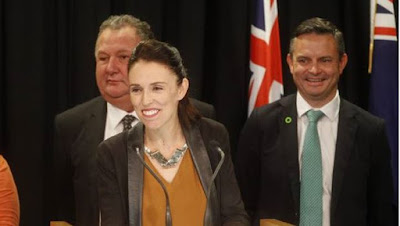 Why Is James Shaw Smiling? Labour's motto, when it comes to potential political challengers, has always been: "No enemies to our left!" Given the recent history of Labour's left-wing competitors, the Green Party co-leader's broad smile is probably misplaced - especially given where he's standing!

THE BIGGEST THREAT to NZ First’s and the Greens’ political survival is Labour deciding that it doesn’t need them.

Practically from the moment it moves into the Beehive, the Labour Party has a nasty habit of displaying an entirely unjustified confidence in its own political competence. This unfortunate mindset may be traced all the way back to the fourth Labour government of 1984-1990.

The so-called “Rogernomics Revolution” was very much a top-down affair for which the new Labour government possessed not the slightest electoral mandate. David Lange and his cabinet justified this turning away from democracy by convincing themselves that ordinary Kiwis were neither ready, willing nor able to make the tough economic choices being demanded of New Zealand. They masked this frankly elitist view of politics behind the slogan: “There is no alternative!”

Labour’s extraordinary arrogance persisted into the MMP era. Scant respect was given to the ideas and priorities of coalition partners by senior Labour ministers who tended, if they were feeling charitable, to dismiss their allies’ policies as unsophisticated and ill-conceived or, less charitably, as just plain nuts.

Labour’s core assumption still appears to be that only its ministers possess the skills and credentials necessary to deliver effective government. What do they mean by effective government? Once again, the legacy of Rogernomics is evident. “Effective government” generally appears to mean implementing policies designed to earn Labour the respect of the other members of the power elite: business leaders, the news media, senior civil servants.

These policies are embraced by Labour because its leaders are either already convinced or, at the very least, prepared to be persuaded, that no other policy prescriptions possess the slightest chance of working. It’s a mindset best illustrated in the oft-quoted parliamentary response of the Labour cabinet minister, Steve Maharey, who described a broken policy commitment as: “Just one of those things you say in opposition, and then forget about when in government.”

Such a mindset would regard it as politically suicidal for NZ First and the Greens to resist the power elite’s effective government policies. It would argue that, in the face of such recalcitrance a snap-election would have to be called and the recalcitrant parties (Labour’s erstwhile coalition partners) would be bundled unceremoniously out of Parliament. With the support of NZ First’s and Greens’ more “realistic” voters and the assistance of a significant “Trash Vote”, either of the two major parties would be well-placed to win the election outright. Hence the Labour leadership’s confident assumption that their allies will always be persuaded to see sense – just as they were over the Trans-Pacific Partnership.

The recent history of populist parties in New Zealand demonstrates the enormous danger of entering into political relationships with parties more interested in the good opinion of the power elite than the people. As NZ First, the Alliance, United Future, Act and the Maori Party have discovered, the only reliable companions for populists are – other populists. Certainly, formal coalitions and confidence-and-supply agreements negotiated with “mainstream” political parties have proved extremely costly to their junior partner/s electorally.

The explanation for the sometimes-fatal outcomes of these political deals is simple. Large political parties – be they of the centre-right or the centre-left – have absolutely no interest in allowing electoral competitors to grow at their expense. In the ruthless political calculations of political centrists not even ideological soulmates, such as Act, the Alliance (and now the Greens) should be spared.

Consider the actions of the National Party under Don Brash. Having seen upwards of 13 percent of the right-wing vote drift across to Act and United Future, he was determined to reassemble National’s errant supporters under the party’s tattered banner. In this, at least, Brash was astonishingly successful. National’s share of the Party Vote rose from a record low of 21 percent in 2002, to 39 percent in 2005.

Labour’s long-standing motto: “No enemies to our left!” references identical strategic thinking. In the 2002 general election, Labour’s “enemy” was the socialist rump of the Alliance. Had Helen Clark wished to preserve a radical “pathfinder” party to her left, she could have tipped the wink to Labour supporters in Waitakere to cast their electorate vote for the Alliance’s Laila Harre – just as she had to Labour’s Coromandel voters in order to get the Greens’ Jeanette Fitzsimons into Parliament in 1999. In 2002, however, no wink was tipped and the Alliance died.

It might be objected that the present Labour-led government, by fulsomely fulfilling its promises to its partners – especially the Greens – is demonstrating an entirely new approach to coalition politics. Upon closer inspection, however, it is clear that all Labour has done is convey an impression of environmental activism. As the former Green Party co-leader, Russel Norman – now the NZ Director of Greenpeace – was quick to point out, Labour’s decision to issue no new oil and gas prospecting permits offers no impediment to utilising fully those already granted.

The greening of the Labour Party may be more apparent than real. Which is why, as he listened to Jacinda Ardern talking-up Labour’s environmental credentials last week, James Shaw's broad smile may have been misplaced. Did he not realise that, looking out from the stage, he was standing to her left?

This essay was originally posted on The Daily Blog of Tuesday, 17 April 2018.
Posted by Chris Trotter at 10:06

Labours future under Jacinda,s leadership seems to be about building slum flats close to central Auckland
Destruction the oil exploration industry/ jobs of Taranaki.
Not creating jobs.
Getting her Ministers to push the line of more taxes for a variety of ill-found reasoning.(wait for the budget)
Being half soaked in her support of Western military matters.
Bring to NZ more Islamic migrants, legal or illegal.( she does not read or follow the news about Europe's increasing problems).
She seems to excel in posing for woman's magazines and talking trite.
She excels in posing and showing off her boyfriend, and because she is the PM, it looks to me like a parody of her position.
How Winston can put up with the constant charades from the tax induced Jacinda team is beyond me, but then I realise that the title deputy PM for Winston is all it took.
The price for Labour was cheap for this 5/percent NZF cheapskate.
The Labour coalition do not need enemies, either left or right, the parody of themselves as our government is enough, it will catch up to these clowns.

1.Funny Polly, I didn't notice you railing against any of those male National party leaders for their contributions to the woman's weekly and the like.
We notice how "blessed" he is to have such a supportive wife (finger down throat).
We notice in the Australian woman's weekly that he has been combining the prime ministership with parenting duties.
There's gushing bullshit about his son and his new girlfriend.
The governor general seems quite happy to have her picture in various magazines spouting on about how she is a royalist.

2. Many of us think we need more taxation. And are quite willing to pay it. The only problem is they seem to be sticking to the conservative line of regressive taxation instead of progressive.

3. I would love to see the Labour policy that says we must bring in more "Islamic migrants".

While I enjoy having a variety of opinions on this site, (after all we do have Wayne Mapp among others and his opinions although wrong, are at least rational) I really think you probably be better off sticking to whale oil. All you'll get there is a chorus of "Yeah right!" agreement.

This is what happens when you cut taxes. And the rot – figurative and literal – is beginning to be exposed now that national light out of office.

Yesterday, while I was at work, my cousin stole my iPad and tested
to see if it can survive a thirty foot drop, just so she can be a youtube sensation. My apple
ipad is now destroyed and she has 83 views. I know this is totally off topic but
I had to share it with someone!

@Anonymous 12.37
If that thirty foot drop was from the top of the cuckoos nest Polly will have a first hand view on that.