Not A Gentle Species 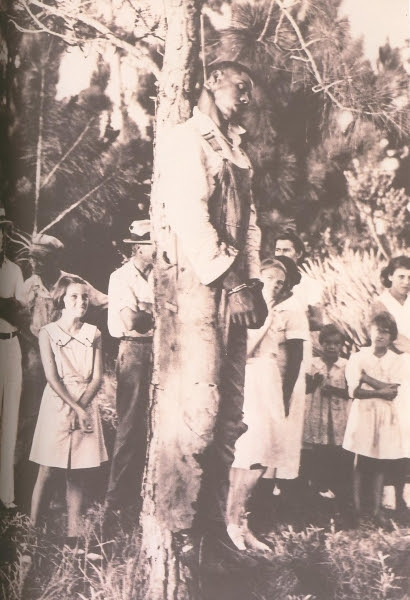 Strange Fruit: A Florida lynch-mob of the 1920s admire their handiwork. Human-beings exhibit a deep fascination with the public infliction of pain and violence.
I HEARD Cindy Kiro being interviewed on the radio the other day. The Children’s Commissioner was talking about bullying in schools. Towards the end of the interview, she said something which struck me as very funny: "Schools should prepare us for life", Ms Kiro declared.
I burst out laughing.
If schools really were about preparing us for life, they’d not only teach us how to endure bullies, they’d teach us how to become one.
What is a bully, after all, but a person who has embraced the basic principles of social organisation more ruthlessly than his or her peers?
Bullies intuitively grasp the brutal, but essential, truth that all human communities are held together by the threat, or, where the threat fails, by the actuality of violence. Experience has also taught them that when the weak are being bullied by the strong, most people will do absolutely nothing to protect them.
Indeed, history shows that human-beings exhibit a deep fascination for the public infliction of pain and violence.
Just examine the photographic record of the scores of lynchings which took place in the southern United States during the first three decades of the 20th Century, and you will be stunned by the participants’ expressions. Though they have just witnessed the torture, emasculation and incineration of a fellow human-being, you will find no traces of horror, fear or disgust upon their faces. On the contrary, they’re smiling broadly for the camera, and their eyes glitter with excitement. Even the faces of the children (some might say especially the faces of the children) wear expressions of fierce triumph and frank pleasure.
We are not a gentle species.
Millennia have taught us that when the powerful start exercising their power the smartest thing for those not involved to do is stand well clear. Those brave (or foolish) individuals who, in ages past, displayed their empathy too openly, or recklessly intervened on behalf of the victim, were clearly placing themselves at an evolutionary disadvantage. Incurring the wrath of the dominant individual, or group, is probably not the most effective method for ensuring one’s genes get passed on to the next generation.
Endorsing the bullies’ choice of victim may not rate highly in terms of ethics, but it’s an excellent survival strategy.
And it is this, the brutal logic of evolutionary advantage, which lies behind the behaviour of so many school principals when confronted with evidence of bullying. Punishing the strong, on behalf of the weak, makes absolutely no evolutionary sense.
Almost unconsciously, the people in charge of our schools – its dominant individuals – will align themselves (emotionally, if not formally) with the bully rather than the victim. In their heart-of-hearts they know that, in the world beyond the school gates, it’s the bullies who go places. They will be the managers, the bosses, the sergeant-majors and – yes – even the headmasters in the workplaces our children will enter upon leaving school. Punish the bully and, by implication, you condemn the intricate system of multiple hierarchies upon which our entire, unforgiving society depends.
So, you see why I laughed – not unkindly, but ironically – at Cindy Kiro and her stalwart ally, Rosslyn Noonan, the Chief Human Rights Commissioner. If they have their way (and in the face of the less-than-sympathetic Education Minister, Anne Tolley, I’m pretty sure they won’t) our schools will be transformed into islands of empathy, decency and justice in a vast sea of social brutality and indifference.
I can’t see it, myself. The fact that the bully’s right to an education is so clearly spelt out by the Education Ministry, while nothing at all is said about the rights of the victim should tell our idealistic Commissioners something about the State’s real priorities. It would certainly explain why, nine-times-out-of-ten, it’s the victims who are forced to leave the school in which they were attacked, and the bullies who remain.
Dear Ms Kiro! Brave Ms Noonan! They’d have us all behave in the "real" world, as they’d like to think our children behave at school. And, of course, the Commissioners are right: we should defend the weak from persecution and injustice; we should empathise with the laughed-at, the picked-on, the excluded and the "other". That should be the nature of the world into which our children sally forth.
Why shouldn’t they have something to teach us?
This essay was originally published in The Dominion Post, The Timaru Herald, The Taranaki Daily News, The Otago Daily Times and The Greymouth Evening Star of Friday, 20 March 2009.
Posted by Chris Trotter at 10:55

Excellent post Chris. It illustrates nicely the difference between idealism and practicalities.

Btw should we be spooked by the fact that you have a separate label for your posts titled "Lynching"?

Interesting the out dated photo you chose for this posting.

Would you like me to send you some photos of more recent cases of mob bullying? There are plenty of images available of women being stoned by men under Islamic law. Now THEY are recent!!! And you should see the looks on the faces of those men when they throw the stones. Not fascination I can tell you. Pleasure and fun.

And then there are the hundreds of young men who each year hang themselves to save the bullies the trouble.