An Old Tale From An Old Book (For Tony Veitch) 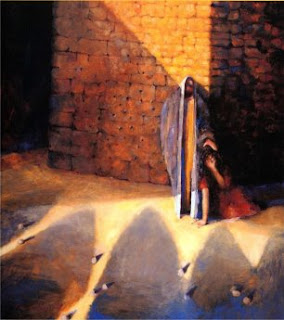 I’VE seen her before – this huddled heap of terrified humanity, ringed now by so many angry faces. I’ve seen her many times: striding down the narrow streets like a princess; those long dark tresses framing a pair of even darker eyes.
But those tresses are twisted now, like a leash, around the right hand of her furious husband. And those eyes? They’re blackened and swollen from the beating he’s already given her. He keeps tugging at her hair for emphasis, jerking her face upwards as he unfolds the oldest of tales.
The planned departure, the unplanned return, the unwanted surprise.
Her lover, being stronger, escapes the jealous husband’s hungry blade. Plates and pitchers tumble and shatter as he hurls his guilty body through the narrow window, and lands, unscathed, in the street below.
He’ll be well away by now, high up among the rocks and the thorn-trees, chortling his good fortune to the indifferent goats.
But there is no escape for the woman. Her fear-widened eyes, frantically search each face in the rapidly growing crowd for a defender, but they are met with stares as cold and hard as the stones in its hands; as harsh and unforgiving as its Law.
I, too, am looking at these faces. Most of them are familiar to me – though none of them, I’d wager, would recognise my own.
After all, why should they? A cripple and a beggar, I am invisible to them – except when I thrust one of my crooked limbs into their distracted faces and cry for alms. Even then, I’m as likely to receive the back of their hands as the coins I call out for.
Look at them now: their eyes already glowing with the prospect of the sport that lies ahead.
Ezra, that bloated publican from the inn down the street, how many times has he cheated on his poor long-suffering wife? A list as long as the endless succession of pretty serving-girls passing through his establishment.
And Mark, the lawyer, so upright and pure. Ha! As if the poor souls he fleeces don’t curse his flint-hard heart. Look at him standing there – why, Jehovah on the Day of Judgement would be hard pressed to look so holy.
And Matthew, the Zealot. I might have known he’d be here. How many Roman soldiers has his sword severed from this world? Men with families back in Italy or Gaul, serving out their time in this curious little land. Well, they’re ours now, for they’ll not be leaving the shallow graves that Barabas and his heroes have tossed them into. No, if there’s blood-letting to be done – even of our own – the Zealots may be relied upon to do their share – and more.
But what’s this murmur that ripples, like the breezes among the willows at the lake’s edge? Who dares to break the town’s tight little circle of hatred and retribution?
Ahhh – I might have known. The Gallilean. See how they make way – as if it was Herod himself come among us. But I know why they shrink from him. When he reached out and blessed me – up there on the Mount of Olives – it was like ice water in a parched throat.
Look at him now. See how he holds each man’s eye, as if it is a window through which he can read the full tally of their crimes. He crouches down – to be at the same level as the woman. What is it he writes in the dust? Does he name her sins, or those of her judges?
Matthew tosses him a stone. It lands with a thump at has feet.
"She must die!", he barks. "It is the Law!"
The Gallilean turns his gaze upon Matthew.
"Yes," he says softly, "it is the Law. So, let he that is without sin among you cast the first stone."
He turns his back to them, kneeling beside the woman, gently untangling her hair from the weeping husband’s inert fingers.
All around them stones thud softly into the sand: dropping like ripened fruit from the hands that held them. Soon he and the woman are alone in the street. From my vantage point in the alleyway, above the sound of her sobs, I hear him say.
"Go, and sin no more."
This short story was originally published in The Dominion Post of Friday, 18 July 2008.
Posted by Chris Trotter at 11:50

Assuming this is a variation on the "he's been punished enough, get over it" theme, and Veitch is in the role of the woman (although a "provoked" stone-thrower would be more appropriate), nobody's saying he should die.

Just give an apology that doesn't in some way blame her for his actions.

In answer to "anonymous chortle" I have to agree I see no reticence in the Veitch "apology". Having said that I think JC was on the right track in saying "sin no more". Punishment in my experience does not automatically lead to regret or empathy for the victim, or self awareness of right and wrong. The perpetrator cannot be made to accept responsibility through punishment.
The more important thing about this story is the mass intent to punish, the mob being us through our acceptance of a frenzied blood lust in the media. And the victim pursued aswell as the guilty party, all very tasteless.