Keeping Obama and Chavez on the same side 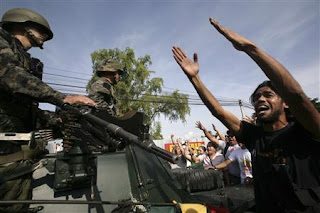 Honduras Agonistes: The best way of restoring democracy to the Honduran people is to do everything humanly possible to keep the Obama Administration on side with the left-wing governments of Central and South America. So long as Barack Obama and Hugo Chavez stand together, the Honduran Right's plans for establishing a dictatorship cannot succeed.

THE MILITARY COUP D’ETAT in Honduras has brought about the "pinch-me-I’m-dreaming" sight of revolutionary Venezuelan leader, Hugo Chavez, ranged alongside reformist US President, Barack Obama.
That is a pairing worth preserving.
Not only because the cementing-in of US opposition to the Honduran elites’ attack on democracy is clearly the most effective means of restoring that country’s ousted President, Manuel "Mel" Zelaya, to power, but also because it would represent a massive advance towards the Holy Grail of left-wing Latin American diplomacy – a United States Government willing to stand behind the right of the region’s peoples to determine their own futures without the overt or covert interference of American capitalists.
Unfortunately, the first response of the New Zealand Left has been to more-or-less ignore Obama’s (and Hilary Clinton’s) condemnation of the Coup, and insist, instead, that the Honduran military are simply carrying out the wishes of their American advisers. It is inconceivable, they say, that such a controversial political intervention by the armed forces of a Latin American state (the first since 1993) could have been initiated without first receiving the green light from Washington.
Accordingly, a number of New Zealand leftists are planning to picket the US Consulate in Auckland. Their demands will include the closing of the notorious School of the Americas – training-ground for every military dictator and death-squad commander since the early 1950s, along with the withdrawal of all US intelligence agents from Central and South America.
Both strategically and tactically, I believe this is precisely the wrong course of action to follow.
Of course US intelligence officers and military personnel would have been aware that the Honduran Right was planning to head-off a Venezuelan-style revision of the country’s constitution, and many – perhaps most – of these individuals would have been strong supporters of such a plan. But the facts – as far as we know them to date – all point to the Obama Administration refusing to back the proposed coup.
To ignore this fact is to, objectively, play into the hands of the most right-wing elements within the US Government, Intelligence Community and Armed Forces. They don’t care if Obama is castigated by the International Left as an imperialist – in fact they’d rather welcome it. What terrifies them is the prospect of Obama and Clinton, by publicly repudiating the actions of the Honduran military, along with its right-wing civilian backers in the judiciary, congress and the news media, forcing the Americans on the ground in Tegucigalpa to break-off their relationships with the plotters and, by standing back, allow the popular resistance to gather strength.
Keeping the USA aligned with Venezuela, Cuba, Bolivia, Brazil, Uruguay, Argentina, Chile, Nicaragua and El Salvador on this issue should, therefore, be the prime progressive objective world-wide. The New Zealand Left – along with their comrades across the world – should be heaping praise upon Obama and Clinton. Instead of angry demonstrations outside the US Consulate, we should be organising expressions of support for the Obama Administration’s stance.
Only if Washington abandons Honduran democracy - thereby signalling a return to business-as-usual in Latin America - should the anti-imperialist slogans be dusted off, and Old Glory resume its time-honoured relationship with paraffin and matches.
Posted by Chris Trotter at 17:03

Socialist Aotearoa is planning a peaceful vigil, rather than a angry picket I believe. They are planning on taking candles along.

That is good to hear, although I still wonder about the choice of venue. Why the US Consulate?
Why not a more neutral spot? Especially since this is the one time in my lifetime that the USA has tried to stop (rather than start) a coup d'etat.

Not bad, Chris. You managed three paragraphs, before you started laying into the left. You need to start providing some evidence to back up your claims that everyone else disagrees with you, and is wrong. Simply saying, "Unfortunately, the first response of the New Zealand Left has been to more-or-less ignore Obama’s (and Hilary Clinton’s) condemnation of the Coup, and insist, instead, that the Honduran military are simply carrying out the wishes of their American advisers" isn't really good enough. It's the sort of claim that needs to be backed up. Otherwise it just sounds like you're indulging in your eternal factional squabbling with leftie bogeymen. We're the People's front of Judea, and so on.

Good point - this is not a US-driven coup (at least, not US government-driven). One might demonstrate at the US embassy to support Obama's position...... but that might be a placard too far for some.

I was responding to a text message circulated by a spokesperson for Socialist Aotearoa.

My posting was an attempt to head-off at the pass a course of action I genuinely believe to be counterproductive.

To the credit of SA, the plans for their proposed demonstration have been substantially modified. It will now be a straightforward demonstration of solidarity with the Honduran people's struggle against fascism.

If you're in Auckland, it's taking place between 2pm and 4pm outside the US Consulate on Customs Street. Bring a red flag.

Thank you for the clarification. Though Socialist Aotearoa are hardly representative of the "New Zealand Left".

I dreamed about Bowalley Road (the blog) last night. Is this normal?

Absolutely! Most people only dream of keeping a blog like Bowalley Road! ;-)

Protip: Manuel Zelaya is a Chavez stooge who was a day away from starting to establish his very own socialist dictatorship. The military acted under the orders of the Supreme Court, with unanimous support from the Honduran Congress, who found his little referendum unconstitutional, and who had unconstitutionally fired the chief of the armed forces, simply because he refused to carry out Zelaya's illegal orders. The acting President is of the very same political party as Zelaya and the November election is continuing on schedule.

We should be celebrating this, but then since NZ moonbats all fetishise Piggy Chavez and his bankrupt Bolivarianist cancer, it's hardly surprising that they aren't. My understanding is that Zelaya is going back to Honduras. I hope the military correct their terrible mistake and throw him in a dingy jail cell instead of being allowed to become a cause celebre for Latin American Marxists.

Thanks for the support again, comrade ;)

Here's some intersting background on General Romeo Vasquez's alma mater, the infamous School of the Americas, now rebranded as the " Western Hemisphere Institute for Security Cooperation ".

See you on July 4th to celebrate INdependence Day for Honduras).

Chevez is elected, as is Zelaya - Latin America doesn't need or want rightwing dictators again and their military thugs - no need for a return to fascism.

Just because you are "democratically" elected does not mean you are democratic. Just ask Ahmadinejad, the guy the left supports because he wants to destroy Israel.

The Chavismo cancer needs to be excised, and if that requires an enthusiastic impeachment and the removal of a power-hungry Marxist and the return of power to the Congress and the Constitution as laid out when they last got rid of a tyrant, then that should be applauded.

There are times Mr Lolol when I seriously question the wisdom of affording free speech to fascists.

The Honduran constitution is one of the most repressive neo-liberal documents ever enacted. It deliberately makes no provision for the right of the Honduran people to alter their constitutional arrangements if that is the will of the majority.

That is why Zelaya was preparing to hold a non-binding referendum - to establish the reality of the majority's desire for a change in the rules that govern their country.

It was the imminence of this democratic exercise, and the high probability that it would deliver the President the moral authority to press forward the claims of ordinary Hondurans, that precipitated the coup d'etat.

Clearly, none of this cuts any ice with you though - does it Mr Lolol? Presumably, you subscribe to Henry Kissinger's remark concerning Allende's Chile: that imperialists and fascists should not have to sit back and watch a country turn communist due to the irresponsibility of its own people.

But that sort of thinking only ever brings a temporary halt to the advance of human freedom. After all, Mr Lolol, Pinochet is dead - and Chile lives.