More on the Bain Case 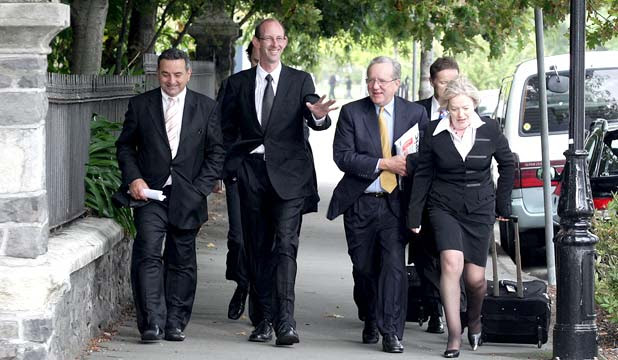 Chris, methinks the divide here is really between materialism and idealism. Rubbing up against all of your philosophical fulmination is the hard evidence of the rifle prints, the paper run oddities, the jersey fibres under the fingernails, the struggle with Stephen, the self serving note on the computer, the full bladder and on and on it goes. I don't like the bourgeosie one little bit, but am prepared to admit that some of them get the facts right some of the time.

Ever the Stalinist, Don. I should have known you'd appreciate a good show-trial (Dunedin 1994) when you saw one!

I can't believe how much I'm enjoying this blog, given that I react so strongly *against* your take on feminism and identity politics! Shock, horror, it's possible to agree with someone in some areas and disagree in others!

I've no idea if Bain is guilty or not, but it certainly seems a miscarriage of justice took place, and your class analysis is so good to see out in the public domain.

I'm a New Zealander who has lived in Glasgow for 12 years, and I've only started to think about and understand New Zealand's culture and history through the lens of class politics since being here- it was all opaque to me back then. Reading this blog is really helping me. And it helps me explain New Zealand a bit better to my red-or-dead working class Glaswegian partner!

As a side-note- you couldn't have been more wrong about Glasgow in the previous posting comparing it favourably to Auckland. The Council here is a shameful corrupt shambles which has had no thought for the needs of ordinary Glaswegians for many years: in the pocket of big business and lining their own pockets. But that's a discussion for another day.

Drifting a little bit close to the shoals of your own Bowalley Road Rules there I would have thought Chris. Dunedin showtrial my arse.
Irrespective of that, the facts remain, bloodstains, bladder and all.
In the realm of esoteric theorising, I would credit the ruling class with a wider vision and a thicker skin. The surplus value is what decisively counts in this game. The current exploiters and despoilers of the planet are not to be put off their stride by one unconventional untidy household.

According to your logic Chris, David should have been seen as an avenging angel redeeming the fallen family. This logic explains also why he wasnt allowed to plead insanity without underming the act of redemption.

The only person I know of who thinks David Bain was guilty is my father-in-law, a dyed in the wool Otago peasant who votes National. My wife, myself and other effette, well educated, more-or-less leftwing liberals, all thought he was innocent.

That said, the father-in-law is very traditional in his views about families and such like, so there might be a little something in some of what you say, though not the rather silly economic determinism.

I think you need to look more at the superstructure, not try to uncover bogus economic justifications for everything. Remember, the key myth of the bourgeois religion -the one you're forever blethering on about, to the detriment of your blogging - is of suffering, injustice and redemption.

That might point the way to an interesting analysis. My gift to you. May your moustache grow long.

What crass superiority Mr Trotter trots out - the underlining meaning is an admiration for Karam and his crowd - what labels do you attach to them? clever, intelligent? David Bain killed his entire family - and no matter how you dress it to fit your own deliberations or throw dust in the eyes of the public that fact remains.