The Politics of Barking and Biting 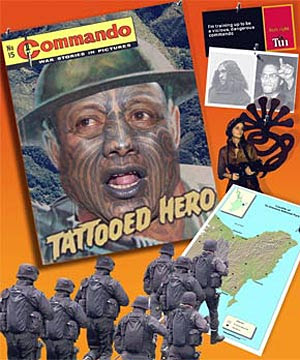 Barking mad? The last time the New Zealand State took the threats of Maori nationalists seriously, many New Zealanders responded by accusing it of over-reacting and "going a bit over-the-top". It is to be hoped that the mostly rhetorical and/or symbolic "barking" - of both sides - never progresses (as it did in the 19th Century) to "biting". Photomontage by Pam Templeton.
PROTESTING against "160 years of colonial oppression", Mr Tass Davis, a Ngapuhi elder, has announced his intention to lead up to 300-400 Maori in the non-violent "occupation" of courthouses and courtrooms in and around Auckland, and in the "invasion" of properties belonging to "targeted" judges.
It says something rather touching about this country, that this politically inflammatory news story has been received by most New Zealanders with either a weary sigh, or a wry grin – followed by a dismissive shake of the head.
And, so accustomed have Government Ministers and security officials become, over the past forty years, to radical talk from angry Maori groups, that threats like Mr Davis’s are simply absorbed and digested without anyone flying into a panic.
It is doubtful whether, in any other jurisdiction of this post-9/11 world, threats to occupy courthouses and invade the properties of the judiciary (albeit "non-violently") would be received with such equanimity.
In North America, Europe and Asia, anyone making such threats would almost certainly be rousted out of bed in the early hours of the morning by black-clad, heavily-armed policemen, and hauled off to several weeks of none-too-gentle "interrogation".
Indeed, so certain have New Zealanders become that this country’s indigenous population poses no threat to the status-quo, that, on the one occasion when our own police force did go in black-clad and heavily armed, there were howls of outrage, and a popular consensus swiftly formed that "the cops had over-reacted" and that their invocation of the anti-terror legislation was "a bit over-the-top".
For Maori activists, this Pakeha complacency at the quiescent state of New Zealand’s race relations must be almost as galling as the "colonial oppression" they are trying to resist.
Those familiar with the "Frankfurt School" of Marxist social criticism will, of course, recognise the phenomenon as an example of Herbert Marcuse’s "repressive tolerance". Or, to paraphrase Oscar Wilde: "The only thing worse than being taken seriously by the Colonial State – is not being taken seriously by the Colonial State."
It’s enough to make a Maori revolutionary upset the apple cart, if only to see, in D. H. Lawrence’s lovely line: "which way the apples go a-rolling".
Although, in this particular case, the political efficacy of the exercise would appear to lie in the threat itself. Because, according to Mr Davis, his group’s real purpose is to secure a meeting with the Minister of Maori Affairs, Mr Pita Sharples.
"We want to bring a sensible approach to these discussions, not incite fear", was how the Ngapuhi elder and former policeman put it to Jonathan Marshall of The Sunday News. "That does nobody any good."
Given the fact that Mr Davis’s nephew is none other than the Minister’s Maori Party colleague, Mr Hone Harawira, one might be forgiven for thinking that a simple phone call would have produced the desired outcome more effectively than threatening to re-start the sovereignty wars of the 19th Century. But, then again, the Maori way of politics has always erred on the side of subtlety.
Perhaps the actions of Mr Davis, like the actions of Mr Harawira’s nephews at Waitangi earlier this year, are targeted not so much at the wider Pakeha population, as at the Prime Minister, Mr John Key.
Perhaps it is Mr Harawira’s – and his left-wing faction of the Maori Party’s – way of saying to Mr Key: "Don’t take us for granted, or make the mistake of believing that, just because we’ve struck a deal with you, we’re no longer dangerous. For the moment, Prime Minister, we have chosen to smile at you. But that doesn’t mean we have lost any of our teeth."
A few years ago, a friend of mine very presciently remarked that Maori now held the place in New Zealand politics formerly occupied by the trade union movement. By which he meant that the tangata whenua possesses, as the unions once did, the collective strength of purpose to intervene directly – and decisively – in the life of the nation.
He was also saying that the level of coercive power required to break the strength of Maoridom would be far too draconian, and divisive, to ever risk deploying except in the direst need.
The Harawira whanau knows this, and the Pakeha Establishment knows that they know it.
Let us hope that neither side ever feels honour-bound to prove it.
This essay was originally published in The Timaru Herald, The Taranaki Daily News, The Otago Daily Times and The Greymouth Evening Star of Friday, 3 July 2009.
Posted by Chris Trotter at 10:14

As I see it Chris in this piece you are trying to have it both ways - on the one hand you say (I think correctly) that Maori nationalism poses no threat to the NZ capitalist state, yet on the other hand you still seem to feel that the 2007 "anti-terror" raids at Ruatoki and elsewhere were in some way justified?

Please correct me if I'm wrong.

No, not quite, Fatal Paradox.

I think there is considerable potential for violent civil strife in the Maori nationalist movement. However, most NZers, including those in Government, refuse to take Maori radicals very seriously at all.

From what I have been told, the Police had a duty to stop what was happening in the Ureweras. Not to have done so, on the basis of the information they'd ammassed, would have been extraordinarily irresponsible.

And, of course, if something terrible had happened - they would have copped the blame.

Most Maori have got enough brains to know that there is no need for this sort of nonsense when you can get what you want through 'normal channels.'

No wonder the leftists are shitting their pants.

Tariana and Pita and John have rendered them irrelevant and impotent.

Woops, forgot to say "What an excellent piece, Mr Trotter."