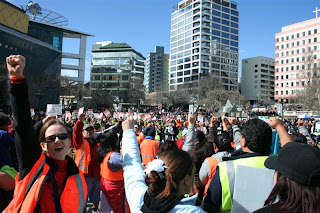 In unity is strength: Social Democrats cannot countenance the arbitrary dispersal of the New Zealand people’s resources, nor the slow fragmentation and dilution of their rights.
Impressed by Jordan Carter’s admirably succinct summation of his social-democratic world-view over at Just Left, I decided to post my own attempt at formulating a social democrat’s credo. Jordan has heard it before – it formed part of my presentation to the Labour Party’s Summer School held on the Firth of Thames in January 2007 .
I BELIEVE that human societies arise out of need. The need for food and shelter, the need for intimacy, the need for nurturing, and the need for protection – both from natural dangers, and the aggression of our own species. To secure these needs, human beings must work, individually or collectively, but always with the ultimate goal of keeping strong those innumerable threads that bind our communities in a functioning wholeness.
The source of fulfillment of human needs is the natural bounty of the planet on which our species dwells. Human beings are but one of the countless life-forms which inhabit the Earth’s surface, and we share with them a fundamental dependency on the planet’s life-giving properties.
Alone among all the creatures of the Earth, humankind possesses the power to consciously alter the fragile environment of its home. Such power bears with it an awesome responsibility: our own future, and the future of all other living things, depends upon our willingness to accept that what is possible is not always desirable. To ensure its survival, the human species must recognise the limits of its power.
In New Zealand, two peoples co-exist in differing states of awareness of the essential collectivism and dependency of human communities. The indigenous people possess a clear and poignant vision of humanity’s place in these islands. But the colonising peoples would not rest until the ideas and institutions of their respective cultures had taken root in New Zealand. To the extent they succeeded, the conflicts and contradictions of their homelands were also transplanted here. Resolving these conflicts and contradictions, and discovering the best means of prospering together, is the historic task of the two peoples fated to share these islands – Maori and Pakeha.
As a social-democrat I am dedicated to furthering in all aspects of my country’s social, political and economic organisation the essential equality of human beings. Social-democracy defines equality in terms of the universality of human need. Old or young, male or female, Maori or Pakeha, we are all defined by the human and ecological relationships indispensable to our existence. None of us live but by the bounty of nature and the collective exertion of our fellow human beings.
That being so, we must reject all claims hostile to the reality of our interdependence. Individuals and groups who by superior strength or simple good fortune are endowed with wealth and influence, enjoy their advantages on the sufferance of that vast majority whose daily labours make possible a functioning society. Only so long as, in the judgement of the many, the possession by a fortunate few of social, political and economic privileges serves the community as a whole, will those privileges endure. Any attempt by a minority to transform the privileges granted to them by the majority into a system of permanent advantage cannot be deemed just.
As a social-democrat I look to the state, as the institutional expression of our interdependence, to secure for all citizens a healthy and abundant life. The provision of gainful employment, education, health, housing and protection against adversity are rights due to all New Zealanders. Political institutions are established to secure these rights, drawing their authority from the freely given consent of all responsible citizens. Those charged with governing our country, hold in trust the resources – both natural and social – that are the common property of all our people.
Being a social-democrat, I cannot countenance the arbitrary dispersal of the New Zealand people’s resources, nor the slow fragmentation and dilution of their rights. Neither will I surrender the sovereignty of my nation to the interests of foreigners. Though the fundamental kinship of all human beings is indisputable, New Zealand’s destiny, finally, must be the enterprise of New Zealanders alone.
Posted by Chris Trotter at 17:05

Chris, do I take from this post that you nail your colours to the mast of capitalism controlled by social democrats, as opposed to a socialist society free of capitalism? Are you making the case for capitalism "lite"?

No, there's no such thing.

I'm making a case for a society in which the key social services and all the natural monopolies are in public hands; most of the agricultural sector is co-operatively owned - along with the lion's share of food distribution; but in which the bulk of the retail and service sectors remains in private hands.

I don't want my electricity or water supply to be privately owned, but neither do I fancy dining at a state-run restaurant.

To keep everyone honest there would, of course, be a fiercely independent, publicly funded, news media, and a large and proudly democratic trade union movement.

Why am I a Social Democrat? Go to Bastion point and stand and consider the Savage Memorial. Cast your eyes about yourself and wonder. Wonder what may have motivated a taciturn, isolated and parochial people to build such a memorial to a mortal man, a mere politician of no great presence, who conquered no new lands and won no great victories. Ponder that this monument was built because "He loved his fellow Men". Such is the power of a noble idea.

And I think of Willi Brandt, who fought the Brownshirts in the streets of Berlin; who (in World War Two) placed his loyalty to Social Democracy and to working people above the calls of race and nation and then stood up to Stalinism in the bombed-out ruins of post-war Berlin; who helped build Germany's impessive post-war democracy; who championed the 'social market economy'in which the state sought to provide whatever the market could not; who forwarded workers' participation in industrial decision-making,sank unrehearsed to his knees on the site of the Warsaw Ghetto, helped build humane detente between the two parts of a divided Europe and then channeled his energies into reducing the gap between 'North' and 'South'.

As Social Democrats, we stand on the shoulders of giants and should not forget it.

It may be my age but I can't see Social Democracy as anything other than the wisdom distilled from the experiences of the twentieth century, with all its horrors and all its triumphs.

I am perpepetually amazed that its merits are not self-evident and the follies of its opponents not immediatly seen as risible .

The neo-liberal credo of the atomised individual as the source of all value and all creativity totally ignores the social and cultural capital that makes all human achievement possible.

A really good article, Chris. It's only weakness is the shortage of economics, but that's more than made up for by the equally excellent previous item.