Shadows of the Past 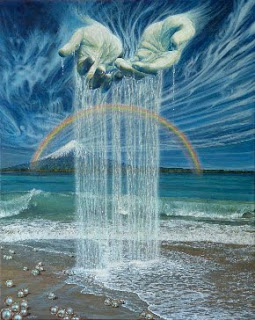 Troubled Waters: Comfortably oblivious to their history, New Zealanders continue to believe in the moral superiority of their country's race record. The painting is by Paula Novak.
IRON DOORS still guard the rough-hewn cells in which the secrets of our past lie hidden. There is little to be seen through the grills, the dark air is chill and dank. The sound of falling water – drip, drip, drip – keeps the rhythm of the passing years. No plaque explains their purpose, no tourist buses stop to mark their contribution to the city’s history. The official record barely mentions them: "it has been said that a cave was sometimes their night’s shelter when they were out at work by the harbour". Who were "they"? What was their "work"? And why were they herded like animals into filthy holes in the ground?
In the history of Aotearoa-New Zealand there are so many pressing questions; so many frightening answers.
We prefer not to ask the questions. War crimes, the incarceration of political prisoners; these things happen somewhere else – not here – not in New Zealand.
"Wretchedly housed and fed, constantly harassed and mistreated, brutally punished for real or imaginary offences, the slave workers were omnipresent in wartime Germany."
Ah, yes, in Germany such things have happened. It is true that the Germans "watched columns of ill-fed and poorly clothed workers in the streets of their cities". It is well known that they turned their heads away – passed by on the other side. But such things did not happen here; not in "God’s own country".
But they did happen here.
Seventy-four prisoners-of-war arrived at Dunedin wharf on 6 November 1869. They were warriors of the Pakakohe hapu of the Ngatiruanui iwi under their chief, Taurua (ally of the formidable war-leader Titokowaru). They had resisted the invasion of Taranaki by General Cameron and his imperial troops. They had lost. For three years they were held in detention in Dunedin Gaol (when they were not being locked away in caves) and by the time of their release, in 1872, twenty-five percent of them were dead.
That is who "they" were. Their "work by the harbour" was the construction of the Anderson’s Bay causeway.
One hundred and twenty-four years later that causeway is still there. Thousands of cars pass over it every day. The drivers of those cars, comfortably oblivious of its history, continue to believe in the moral superiority of their country’s race record when compared with that of the Germans, Afrikaners and Americans. But how many notice the modest monument set back from the road that leads off the causeway and into the city? Erected by the Maori people of Taranaki, the memorial features a single, grey river stone. "The stone above, named ‘Rongo’", reads the inscription, "is a memorial of remembrance for the many who sacrificed life and death for God, land and people."
Just eight years after the departure of the defeated Pakakohe warriors, Dunedin Gaol received forty-six additional captives from Taranaki. This time "they" were political prisoners.
Denied legal representation, denied medical treatment, denied the most elementary human rights, they had been shipped to Port Chalmers under the provisions of the Maori Prisoners Act (1879) in order to spare the colonial government the embarrassment of putting them on trial. In the course of their journey to Dunedin they had been beaten and abused by land-hungry settlers, rounded up by an armed constabulary, and stripped of the legal protection guaranteed to them by Article Three of the Treaty of Waitangi. Through it all these followers of the prophet, Te Whiti O Rongomai (The Peacemaker) had not raised a single hand in anger. Forty years before Ghandi, Te Whiti had perfected the political tactics of civil disobedience and passive resistance.
All this is commemorated on a simple memorial erected under the looming cliffs of Otago Peninsula.
Many Dunedinites pride themselves on living in a city far away from the fierce confrontations of Bastion Point, Waitangi and Moutoa Gardens. In this southern city you can walk the length of the main street without seeing a single brown face.
But it is all a lie.
Even here, even in lily-white Dunedin, the stones themselves cry out for justice. In the dark interior of those awful caves the drops of water fall like tears – drip, drip, drip – upon the conscience of the victors, the hearts of the vanquished.
Chris Trotter
May, 1995
Posted by Chris Trotter at 17:59

sweet jesus,
is that his hands in the
photo
'shadows of the past'
be careful Chris you are casting yourself

Not quite sure of your point, Peter. The painting "Healing Hands" is one of a series featuring the Maori prophet, Wiremu Tahupotiki Ratana, by Paula Novak. If you look closely you'll see that the mountain in the background is Taranaki. The image seemed appropriate somehow - given the theme and content of my posting.