A Brief Item of News 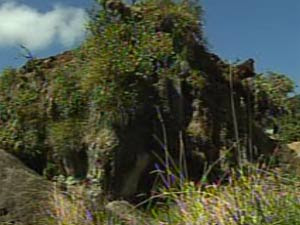 Te Rongomai o Te Karaka - as it was. On the morning of Wednesday, 10 March 2010, this massive stone outcropping above the Marokopa River in the King Country was blown to pieces by Clearwater Hydro Ltd to make way for a road. To the members of the Ngati Peehi, Te Kanawa and Kinohaku hapu Te Rongomai o Te Karaka was wahi tapu - sacred. Its destruction passed almost unnoticed by the mainstream news media.
IT WAS ONLY a brief item on the TVNZ news bulletin of 10 March. If you ducked out to put the jug on, chances are you missed it. (I certainly missed it, and without Scott Hamilton’s excellent blog "Reading the Maps", the story would’ve passed me by entirely.)
There was a lot packed into that one minute, fifty-three second news-item though: almost as much as James Cameron’s interminable Avatar; and the story-line was pretty much the same.
An indigenous people have something of great value – something they’re willing to go to great lengths to protect. Opposing them is a business – a business seeking to harness the latent energy of their unspoiled world.
So far, so Avatar.
But reality is a much harsher storyteller than Hollywood.
The tiny Te Anga Marae lies in the rugged valley of the Marokopa River, about 30 kilometres, as the magpie flies, from the King Country town of Te Kuiti.
A couple of years back it played host to Clearwater Hydro – a company specialising in the construction of small-scale hydro power generation. A dam on the Marokopa would supply cheap energy to the scattered farms and settlements of the valley. The Iwi was all for it, said the company. And, there was money in it. Surplus power could be fed back into the grid – at a profit. Everyone could win.
Except Te Rongomai o Te Karaka. Standing sentinel above the Marokopa, this distinctive, two-storey high outcropping of rock, had for centuries been revered by the local Ngati Maniapoto sub-tribes – Ngati Peehi, Te Kanawa and Kinohaku – as a place of power. Healing plants grew in its crevices. Tribal gatherings convened in its shadow. For warriors it was a rallying point. In short, Te Rongomai o Te Karaka was wahi tapu: sacred.
When the locals discovered that Clearwater Hydro’s scheme involved the destruction of Te Rongomai o Te Karaka they were appalled. A temporary court injunction was secured and appeals were launched for its preservation.
All to no avail. On the evening of Tuesday, 9 March, police officers forcibly removed the thirty-five locals whose bodies had replaced the now-expired court injunction as Te Rongomai o Te Karaka’s last line of defence.
The following morning, Clearwater Hydro’s demolition experts charged the outcrop with dynamite, and to the horror of the hapu, blew Te Rongomai o Te Karaka into a thousand pieces. An eye-witness, Natasha Willison-Reardon, told TVNZ’s Te Karare programme that, as the dust-cloud settled over the ruins of Te Rongomai o Te Karaka, a cheer went up from the company managers and local landowners who’d observed the explosion from a nearby hilltop.
"We heard a cheer from them, and basically they opened up their beer to celebrate."
That’s how real-world confrontations usually end. No blue-skinned N’avi swooping down to save the day. No conscience-stricken human avatars turning their masters’ weapons to nobler purposes. In the valley of the Marokopa there were only the cheers of developers, the high keening of the kuia, and the rattle and clank of diggers and trucks as they hauled away the broken body of Te Rongomai o Te Karaka.
As well she might, the local Maori MP, Tariana Turia, strongly protested this "act of vandalism" carried out "under cover of darkness".
But Mrs Turia’s angry response is ultimately inadequate to the complex play of forces surrounding the destruction of Te Rongomai o Te Karaka. Maori and Pakeha were represented on both sides of this back-blocks confrontation. At dawn, on the banks of the Marokopa, "baddies" and "goodies" were much harder to sort out than the heroes and villains of Avatar.
That’s because in this small, largely unreported incident (it seems only TVNZ reporter, Heta Gardiner, was at the scene) we can see clearly how few, if any, of the grim futures we must choose between have happy endings.
Do we save what is sacred in this land? Or, in the name of progress and prosperity, do we dam it, dig it up, blow it to pieces?
Perhaps I’m worrying too much about an outcrop of rock. Don’t New Zealanders have more to worry about than a small stand-off among the (once) peaceful hills of the Marokopa Valley?
Indeed they do. And yet, the words of poet Gary McCormick keep coming back to me:
How often small things pass
Unnoticed in the larger death.
This essay was originally published in The Dominion Post, The Timaru Herald, The Taranaki Daily News, The Otago Daily Times and The Greymouth Evening Star of Friday, 19 March 2010.
Posted by Chris Trotter at 11:13

Chris, I imagine the same species of "developer" are also cheering and cracking beers over the prospect of mining portions of the DOC estate.

We can get very sanctimonious about how "foreign interests" (ie. mining companies) are indifferent to the sacred and natural aspects of the NZ landscape. But there is a strong local tradition, primarily a pakeha tradition, that is just as alienated from the land, just as dedicated to surveying, subduing and harnessing it.

I see only hard questions coming out of this disgraceful episode.

Can we expect more of these "no alternative" compromises as we march along the shining path to future "prosperity and progress" (and "profit")?

When are we going to get real about the romantic ideologies of progress and unlimited growth?

What? they couldn't go around the rock? Plenty of roads go around things here in New zild..
And nice touch with the Gary, one of my favourite poets - based on his late 70's, early 80's work