Ten Years Ago This Week (The First 100 Days) 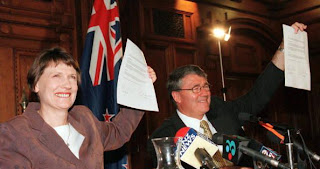 The Helen & Jim Show: The signing of the Labour-Alliance coalition agreement (above) ushered in a period of frenetic promise-keeping by the new government. Not everyone, however, was impressed. By the winter of 2000 the business community was threatening Clark and Anderton with a full-scale investment strike.
MEMO TO: Heather Simpson – Dept. of Prime Minister & Cabinet
FROM: Prolewatch Public Relations
RE: The Government’s First 100 Days
Gidday Heather,
Here’s the cut-down version of our assessment of the Government’s first 100 days that you asked for.
So far so good, we reckon. Even Phil Goff’s mob admits that Helen’s doing brilliantly, and as for the bleeding heart liberals and the arty-farty types – well – who needs Ecstasy when you’ve got a progressive woman Prime Minister! No, as far as the mood on the street’s concerned, you can tell Helen that Labour’s got it sussed.
We’re a bit worried about Jim though. What the hell was all that BS on Holmes about! Jeez, he made that Aussie journo sound intelligent – and that’s not an easy thing to do! Old Jimbo’s going to have to watch himself. Rhetoric’s fine in opposition, but when you’re in government people expect you to know the answers.
To be fair though, it’s not just Jim who’s got people worried, the whole Alliance has a big question mark hanging over it these days. People are saying: "What’s the point of having two left-wing parties? Why doesn’t the Alliance just get back together with Labour?" It’s a fair question. We foresee all kinds of difficulties for Jim and his team as the next election rolls around. Who should they compete with – your lot or the Greens? Jim’s a shrewd bugger, but he might have met his match with this problem.
Still, it’s an ill-wind etc. If Jim has led the Alliance into a dead-end, Laila Harré might be just the gal to lead them out of it. She’s young, smart, politically very savvy – and people are beginning to notice.
Her work with Margaret Wilson on the Employment Relations Bill got all the union heavies into a right old tizzy. Seems she actually forced them to do some thinking – not a pretty sight!
The bosses have noticed her too. They keep asking Matt McCarten: "Is she really as Hard-Left as people say?" To which Matt replies: "Well, she’s hard, and she’s left – and that’s a much more dangerous combination!"
Speaking of the bosses, you’re going to have to keep an eye on them over the next few months. Our spies in the Employers Federation tell us that they’ve never seen their members so rarked up. Re-nationalising ACC was bad enough, but Margaret and Laila’s Employment Relations Bill has driven them into a cold fury.
Don’t underestimate them, Heather. Labour, the Alliance, and the Greens might command a majority in Parliament, but the bosses still rule in the workplace, and all those pen-pushers in the bureaucracy sing from the New Right’s song-sheet – not yours.
And whatever else you do, never mistake silence for compliance. Plots are being hatched and plans are being laid, and none of them are designed to do Helen and Jim any good.
Check out One Network News - you’ll catch our drift. Coverage of the Employment Relations Bill is inter-spliced with scary footage of scuffles on the picket lines and monster trade union marches. Michael Cullen’s Super Scheme is trashed by a couple of workers from a roading gang.
Helen might have picked a fight with the wrong people when she let fly at TVNZ. Getting rid of Roseanne Meo was all very well, but Marian Hobbs will have to take a few more scalps before that lot settles down.
Still, they’ll keep. Right now Kiwis are just enjoying the novelty of a Government that actually keeps its promises. Enjoy what remains of the honeymoon – but don’t forget: it’ll be the Coalition’s last 100 days – not its first - that keeps it in power.
This essay was originally published in The Dominion of Friday, 17 March 2000.
Posted by Chris Trotter at 14:40

Chris,
Your wonderful book details how just ten weeks after that essay was published that the employers and manufacturers had put the subtle pressure on Michael Cullen. It was a mighty reminder to the government of who really runs the country.