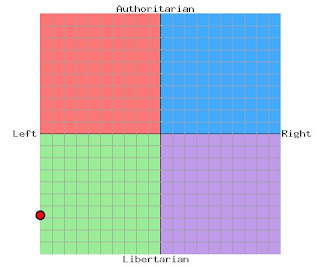 CHRIS TROTTER’S POLITICS
As calibrated by The Political Compass
Economic Left/Right: -10.00
Social Libertarian/Authoritarian: -6.82
Discover your own political orientation at
http://www.politicalcompass.org/
Posted by Chris Trotter at 14:14

Done this sort of thing before but with different questions I finished up much closer to the middle. Most people start life liberal/leftish and ossify into conservative/rightish as they get older.

I must be wired wrong because I'm definitely heading in the opposite direction. At this rate I'm going to finish up an anarcho-marxist libertarian, tree-hugggin animal rights promoting signed up member of the Volunary Human Extinction movement...

It's a good party game but it falls down a bit if you start dissecting the questions.

There's lots of artificially narrow choices. For example, it assumes you believe that corrections policy should be based on either rehabilitation or punishment, when their are many other possible criteria.

I also think that, while the Libertarian/Authoritarian axis certainly supplements the Left/Right axis, there's another important axis that's missing, namely the sceptic/idealist one.

To my surprise, I ended up in the middle of the libertarian-left quarter.

I strongly agreed with many of the statements criticising capitalism but still regard it as more tolerable than most attempts to replace it.

I regard human civilization as a precious and vulnerable plant and I'm, by nature and conviction, sceptical of huge and rapid change, which puts me at odds with many on the left, both libertarian and authoritarian.

The quiz doesn't reflect this dimension.

I came out as -8.88 and -5.19, though there were a number of questions for which I would have liked a "depends" option. While it is a bit of a party game and cannot cover everything, I think the makers of the compass would probably see the authoritarian-libertarian distinction as covering your sceptic-idealist axis, Victor, although it doesn't do so precisely. I am inclined to describe myself as a conservative socialist; not because I disagree with the majority of liberal principles, but because I think the socialist aspect is more fundamental to justice. Liberalism too readily becomes a convenient stand-in for socialism, with the side-effect of leaving the vulnerable even more vulnerable to exploitation. Take the prostitution law-reform for instance, about which I felt uneasy at the time: professional types feel enlightened in supporting it, while a barrier is removed from working class types being driven to doing it for a living. You can legislate against prosecution, but you cannot legislate against degradation, and people can still end up degraded by prostitution, especially if they had little going for them in the first place. Furthermore, when we replace socialism with liberalism on the left, those on the right abandon their own alternative notions of social responsibility, and openly endorse a dog-eat-dog approach. That said, I certainly do not count myself as authoritarian, and hence came out quite liberal.

When I saw the title of the piece I thought you must be reviewing all the red wines made in New Zealand and had just finished sampling them. I was very keen to see your recommendations.
Then I had a go at the quiz and ended up in the middle of the right/libertarian quarter. My objection to the questions is that there is no option to simply decide that the question is silly and there are things I neither agree or disagree with.

As per normal, I tend to agree with you.

I define myself as Burkean Conservative by philosophy and overall world view, Liberal by principle, Socialist by sentiment and Social Democrat in terms of the policies and parties I tend to support.

I see no contradiction in these positions but it does, for example, put me in a different corner
to those who think Utopia is just around the corner, let alone those who are prepared to
kill a few million in the delusion that it will lead them there.

It also, of course, puts me in a different corner to those who think shrinking government is going to contribute much to solving the great problems of the day.

My favourite writer on politics, these days, is John Gray, who seems to believe in what we could loosely call liberal values, without, for a moment, believing that they represent some sort of norm to which human society defaults or to which it is progressing.

Impressive. I've never seen anyone score -10 on the left-right spectrum!

I've been compiling the political compass results for various bloggers, which you view here:
http://liberation.typepad.com/liberation/2009/06/a-far-left-social-libertarian.html

Hopefully, "Scrubone" will update his compilation at some stage, which you can see here:
http://halfdone.wordpress.com/2009-nz-political-bloggers-political-spectrum-quiz/

If not, I'll try to put them all together and blog about the ideology of the NZ blogosphere at some stage in the future.

I had not been particularly aware of John Gray, though I must have read him once or twice in the Guardian of New Statesmen. But having just looked at a list of his titles, he sounds very interesting, and I will follow up on them.

Either there's something deeply wrong with the test, or both Chris and Bryce are Green Party voters. I scored -8.12, -7.33.

I think where the test and others like it are weak is not on the left-right or conservatism-liberalism axis, but on a third idealism-pragmatism axis.

It looks to me like idealists -- those more concerned with normative philosophical or principled political ideas (ought) than with the real-world impementation (is) -- tend to score big numbers (in whatever direction) whereas pragmatists don't.

So I don't think the test indicates that idealists are "more left" or "more libertarian" than pragmatists, only that they're less realistic about implementation.

(I speak as a pragmatist, but I don't mean this as a criticism of idealists.)

Confirmed what I knew already, I am a right wing fascist reactionary scumbag. Actually had a lot of fun doing it, I was really deep down in the left hand bottom corner.

The quiz on who said what on the same site is good for a laugh, a lot of shibboleths go west here aswell.

Lew has a good point that idealism / pragmatism as an index might be as illuminating.

I must say, Lew, this all sounds like a mighty cop-out.

Conservatives (of every persuasion) typically take great pride in their "pragmatism" and, when not heaping scorn upon those who stick to their principles, will (as you have done here) slyly insinuate that their "idealism" has in some unspecified way impaired their political judgement.

The reason for this is as straightfoward as it is disreputable.

Conservatives feel very uncomfortable, and tend to become highly defensive, whenever they are required to confront the logical and/or moral consequences of their beliefs.

It explains why, rather than simply and honestly making the hard choices - and thereby declaring their position - conservatives are prone to refuse, to try and discredit the reasoning behind the choices and/or to challenge the bona fides of the persons requiring them to reveal their true beliefs (and characters) to the world.

Take the question of slavery, for example.

When confronted with the hard choice of either supporting or opposing slavery, conservatives only rarely answered unequivocally. All-too-often they avoided making a clear choice by arguing that the question could not be reduced to such a simplistic dichotomy. The issue was, they said, more complex than that, and not susceptible to either/or propositions.

Abolitionists, they insisted, were dangerous people whose inflexible idealism inflamed emotions and made any solution to the problem of slavery that much harder to achieve.

Historically speaking, of course, it was precisely this sort of conservative prevarication that prolonged the agony of slavery, and, in the United States, rendered it insoluble except by civil war.

What idealists understand, and conservatives masquerading as "pragmatists" do not, is that the longer the polity allows the gap between "ought" and "is" to endure, the greater the moral, social, economic and political cost of its ultimate closure.

Pragmatism has always been, and remains, a mask for the conservative's bad faith.

I learned long ago, as a young trade union activist, that right-wingers always announce themselves by insisting that "this left-right thing is so unhelpful - so out of date".

Which is not to say that, in the process of closing the gap between "ought" and "is", we should behave like simpletons. Shrewdness will always be an indispensible attribute of the successful politician.

There is, however, a world of difference between the man who appreciates the dangers of overloading the vehicle that will carry his people to the promised land, and the man who deliberately immobilises it, or, worse still, drives it off in the opposite direction.

Sigh. I almost didn't post the comment because I suspected it might get taken this way. I'm no more a "conservative" than you are an "authoritarian", Chris.

At the risk of "gettin' all biblical on yo' ass", Lew:

"By their deeds shall ye know them".

I hesitate to continue down this path, but I am intrigued. Just what are my conservative "deeds", pray tell?

The fact is, Chris, that whatever your personal views on conservatives, pragmatists, sceptics and those more cautious than yourself, the distinction between you and them is just as much a political marker as Right-Left(Neo-Liberal versus Socialist) or authoritarian/libertarian. I think you've shown this by your response.

It is indeed, Victor - one of the best.

Hi Chris,
If you do this one, I'll add you in.
http://www.gotoquiz.com/politics/political-
spectrum-quiz.html

Got room for me?

Don't give nuttin to folks I don't knoz - who be "Scrubone"?